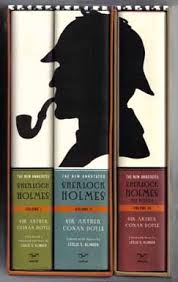 He is one of the most well-known, most widely recognized, and best loved characters in all of literature — the most famous detective in the world, Sherlock Holmes.

And now, federal judge Ruben Castillo has issued a declarative judgment announcing that the good detective, along with Dr. Watson, Professor Moriarty, 221B Baker Street (along with other elements included in the 50 works about Holmes that Arthur Conan Doyle published before to January 1, 1923), are no longer covered by U.S. copyright law and can, according to The New York Times, “therefore be freely used by others without paying any licensing fee to the writer’s estate.”

It wasn’t the most straightforward of cases, as Adi Robertson noted at theverge.com. “Sherlock Holmes’ status as a copyrighted character is easily as complicated as any of the cases he’s had to solve. Created over 125 years ago, Holmes would remain a fixture in author Arthur Conan Doyle’s work until the late 1920s. In the UK, that means that all Sherlock Holmes stories are in the public domain, where they can be used and adapted by other authors.” But until the court’s decision, ten stories remained copyrighted, which Doyle’s estate had long argued was enough to keep “Holmes and Watson under their jurisdiction.” Robertson wrote that “Castillo was responding to a case against the Conan Doyle estate by lawyer and Holmes scholar Leslie Klinger,” (the editor of the three volume, almost 3,000 page The New Annotated Sherlock Holmes (W.W. Norton) along with other Holmes-related books, including collections of newly written Holmes stories.) “When one author included a character from a copyrighted story in an anthology, the estate insisted that the publisher license not only that character but Holmes and Watson as well, suggesting it would work with retailers to pull the book off shelves. Klinger went to court to defend the anthology, and Castillo determined that any characters and story elements from before 1923 — the cutoff date for the copyrighted stories — were fair game for other authors. The ten later stories, Castillo wrote in his opinion, built on the characters of Holmes and Watson, but only the incremental changes they introduced could be protected by copyright.”

What this means is that anyone in the U.S. now has the right to write about Holmes, but with the exception of a few details revealed in the last ten stories – the fact that Watson had been an athlete, for example, or that Holmes had retired from his detective agency. But, Robertson noted, “Ruben also denied part of Klinger’s request, saying that the anthology included examples of things that clearly weren’t in the public domain, like characters written later in the series. But he flatly denied the Conan Doyle estate’s major argument: that Holmes and Watson were such well-rounded, three-dimensional characters that they continued to develop throughout the series.

The Conan Doyle estate, in an earlier defense, had earlier responded to Klinger, who “suggests that Holmes and Watson can be dismantled into partial versions of themselves. But a complex literary personality can no more be unraveled without disintegration than a human personality.”

Robertson reports that from a legal perspective, Judge Ruben said that’s exactly what can be done, especially because judging literary quality is difficult to do in court. “Conan Doyle fails to offer a bright line rule or workable legal standard for determining when characters are sufficiently developed to warrant copyright protection through an entire series,” he wrote.

The New York Times reported that a lawyer for the Conan Doyle estate, Benjamin W. Allison, said that “it was exploring an appeal but asserted that the ruling did not imperil any existing licensing agreements or the estate’s separate claims under trademark law.”

He added that the argument that the “highly delineated” characters of Holmes and Watson rely on elements introduced in the still protected post-1923 stories, and go beyond things such as Watson’s athletic career.

“Those stories are set at a variety of points in Sherlock’s fictional life, not just the end of his life, he told the Times. “They develop the two men’s characters in ways that almost any use of the characters depends on.”

The final ten stories will enter the public domain in the U.S. during the 2020s.