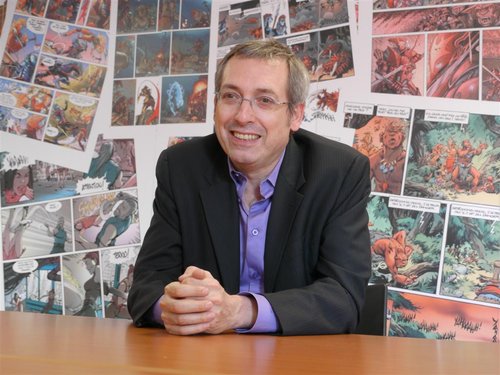 More details about Delcourt’s art school in Paris will be revealed this week.

Coinciding with the opening of the 41st Angoulême International Comics Festival today, Guy Delcourt, head of the independent Delcourt publishing company, which includes Delcourt, Soleil and Tonkam, announced yesterday that he would be opening an art school for comics, or BDs (Bandes Dessinées) as they are called in France.

Called Académie Brassart Delcourt, Delcourt has teamed up with the Ecole Brassart, which specializes in graphic and web design and illustration. Slated to open in October 2014, the school will be located in Paris, which is not, as Delcourt said in an interview with France Info radio station, “the epicenter of French comics,” but deserves to contribute alongside Angoulême, where there is an established department for comics in its art school. Indeed, Delcourt, hired most of the graduating class specializing in BDs from Angoulême’s school in the 1980s when he founded his publishing house.

Delcourt publishes 824 comic books a year, including the best-selling Walking Dead series in translation and Les Legéndaires, a French manga-style series by Patrick Sobral. Delcourt said they sell nearly as many Walking Dead comic books in France as in the US. The BD business in France continues to thrive and Delcourt outlined new trends in the sector such as an evolving female participation both on the creative side as well as in the readership, and an increasing number of feature films or TV movies taking inspiration from BDs, such as the recent La Vie d’Adèle, (Blue is the Warmest Color), Quai d’Orsay and Lulu la femme Nue.

The festival in Angoulême is the industry’s high point of the year, although 2014 has been marred by internal squabbles concerning the voting system for the Grand Prize. This year the contenders for the prize are Bill Watterson, Katsuhiro Otomo, and Alan Moore.

More details about Delcourt’s art school in Paris will be revealed this week. “I owe my beginnings to meeting young authors who were still in [art] school…it’s important to stimulate the BD market by allowing young talent to develop. What better way than to invest in a school…”