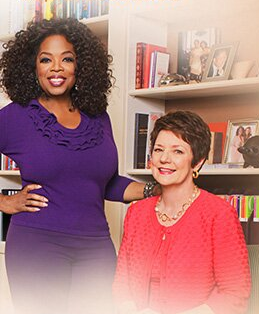 Reading the original Oprah Book Club list is like throwing yourself into a dizzying cultural time machine. From Charles Dickens to Gabriel Garcia Marquez to Toni Morrison, her Book Club picks from the platform of her storied ABC television talk show imprinted a new generation of readers with classics, both new and old.

When her talk show went away, her Book Club did too after a long 15-year run that spread “The Oprah Effect” across the lucky publishers of roughly 70 books. Her first selection, The Deep End of the Ocean, the first novel by Jacquelyn Mitchard, was such a huge success that after being chosen it skyrocketed Mitchard into a sort of writer’s life in reverse, with global success being an immediate effect of the selection.

All good things come to an end, of course, but this doesn’t mean Oprah stopped reading. Now, with her OWN network up and running in full swing, her literacy advocacy has newly billed itself as Oprah 2.0. Sue Monk Kidd’s latest, The Invention of Wings, was named in December as the third book, propelling it to the #2 slot on USA Today’s list of the bestselling books of 2013. The inaugural book of Oprah 2.0 was Cheryl Strayed’s Wild, selected in June 2012, when it was already a bestseller. This was followed by The Twelve Tribes of Hattie, a debut historical novel by Ayana Mathis picked later that year, which never quite caught on, peaking at #41 on USA Today’s bestseller list at the time. With The Invention of Wings, Oprah revisits an author who already benefitted greatly from the first club over a decade ago with her hit The Secret Life of Bees. “I think you’re going to love this [Wings] because it is layered, gripping, and it’s historical,” says Oprah in an online video clip directed to her new Book Club members.

So what’s the same this time around? “Oprah is passionate for books and authors, and this reflects her desire to share what she loves with her followers,” explains Leigh Haber, books editor for O Magazine. “I say ‘Followers’ because as opposed to picking books on her show (ABC) it was just a question of sharing them with her viewing audience.” This time around, a vast infrastructure of digital media promises to boost visibility and sales, with new opportunities for connecting readers with the books she loves. “The major difference is that a much broader platform encompasses the digital book world. The reinvention of the club was to take advantage of all the platforms and reach much a broader spectrum.”

As with most magazine editors these days, Haber’s job responsibilities extend far beyond the printed page, but she’s not complaining. “This has been a great way to get to know colleagues from other wings of the Oprah franchise. I work closely with Leigh Newman at Oprah.com to coordinate our coverage. Sometimes they’ll do extra coverage for books that we can’t get to because of lead-time, so it’s a mutually beneficial relationship. Plus, there are so many social media experts at OWN, Hearst, and at Oprah.com… As an editor you have to educate yourself, but you have a lot of support around you. It’s fun.”

With the 2.0 iteration of the club, Oprah is able to contribute her personal comments about the books, which she does on her own iPad through the special digital edition. It’s not an insignificant observation that the first three picks of 2.0 were written by women. “For this book, one of the points she makes is how imprisoned women were in their roles, whether slave or free and how much hard work and sacrifice went into changing their situations,” says Haber. “She highlights her favorite passages throughout the book, which is awesome for book clubs.”

The seamless conversation that takes place between the platforms creates a marketer’s dream of round-the-clock buzz. Take Twitter, for example. Scroll down on @OprahsBookClub and the accolades for her latest selection roll in with a genuine enthusiasm that puts most blurb copy to shame. (Posted one Oprah follower of Kidd’s latest, @RayTharp, “One of the most astronomically wonderful, inspiring & uplifting books I’ve ever had the pleasure to read.”)

O Magazine, which was named by AdWeek as Launch of the Year in 2001, touts a monthly circulation of 12 million, and subsequently offers a huge amount of pulp real estate to Oprah’s support of books. The January issue features an interview with Kidd, as does The OWN network, which recently aired Kidd’s interview with Oprah in the coveted Super Soul Sunday slot. “In the magazine we have four pages a month for book coverage. We have our Reading Room, our Q&A with the author, Picks to Pick up Now, as well as special features for summer reading and our holiday issue, offering even more coverage,” says Haber. Readers who subscribe to Oprah 2.0’s email newsletter will loop back to the magazine coverage with links out to Oprah.com book features like “7 books that will make you smarter, happier and calmer”, “Memoirs that will get you through hard times,” and “3 reads that will point your life in the right direction.”

Publishers who hit the Oprah Pick lottery can expect a long process. “Once she makes the pick, wheels start turning to support that pick and to work with publisher to bring announcement and news to as many people as possible,” says Haber. Publishers and readers alike shouldn’t expect to see a regularly scheduled rollout of books, nor should they expect their backlist classics to be randomly selected as happened previously.  “It’s hard to predict when they’ll be selected because it’s so organic and personal to what she responds to,” says Haber.

Will there continue to be posthumous selections? “My impression is that her preference is to work with authors,” she says, unable to answer what Oprah’s whims will be with certainty, but keeping in mind the full scope of media possibilities. Read between the lines and it’s likely that Hemingway won’t be resurrecting to appear on Super Soul Sunday.