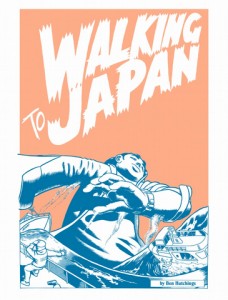 In recent years the idea of serious comics for adults has gone mainstream, with books by the likes of Joe Sacco or Chris Ware receiving glowing write-ups in the press. For some long term aficionados of the medium however it can be rather dull to see so much acceptance showered upon what was once a gleefully trashy medium; indeed the highly respected British cartoonist Brendan McCarthy complained recently that comics had become “gentrified” as “the last piece of cultural real estate to be moved in on by that nice, well-behaved “graphic novelist” crowd.”

For those who, like McCarthy, prefer their comics to keep at least one foot in the weird, Australian independent press Milk Shadow Books may offer some hope.

“There are so many drab autobio comics out there, with 200 pages of people weeping about not getting the crusts cut off their sandwiches when they were five,” says James Andre, the founder and publisher of Milk Shadow Books. “I’m not sure about the market, but I do want [Milk Shadow] to change the world by allowing people to open their minds through their eyes.”

Andre started Milk Shadow in 2008 to self-publish what he describes as a “slime of consciousness” novella that he had written and illustrated entitled The Infernal Sugar Dive. It was, says Andre, a very lo-fi affair: “It was printed on my uncle’s work computer, and was hand guillotined and stapled together.”

As he learned more about publishing, Milk Shadow’s production values improved. Meanwhile he had started to think about publishing other creators, especially cartoonists. “I’ve always had a strong interest in comics, and was hanging around some comic artists in Melbourne… Most of those artists were self publishing as there is no real professional industry over here. We hoped to change that by putting out professionally packaged work of artistic merit. The name is something that came from too much whiskey and not enough sleep.” Andre adds: “It’s either a highly profound statement on birth and death, or total gibberish.”

The work of publishing other writers, artists and cartoonists began in earnest about two years ago. Milk Shadow’s first full creator-owned project was Walking to Japan, a 16-page comic in the format of a newspaper, in which creator Ben Hutchings depicted himself growing to giant size and walking across the ocean to Japan.

Says Andre: “Then for some insane reason we simultaneously released four books, It Shines and Shakes and Laughs by Tim Molloy, No Map, But Not Lost by Bobby.N, Zombolette by Scarlette Baccini, and Stripshow by Bruce Mutard. All were retrospective and re-mastered collections of their underground and self published work. I was a friend and a fan of their work, so I approached them first.”

The New Zealand born, Melbourne-based cartoonist Tim Molloy has since gone on to become one of Milk Shadow’s most acclaimed creators as well as a top seller. It Shines and Shakes and Laughs was a a finalist for a 2012 Aurealis Award, which Andre describes as “the big speculative fiction awards here in Oz,” while his next book, Mr. Unpronounceable Adventures, went on to top the graphic novel category in online retailer The Book Depository’s sales charts. Mr. Unpronounceable Adventures is a brilliantly drawn strip that combines surrealism, H.P. Lovecraft-style horror and black humor. The result is at times laugh-out loud funny, and at other times faintly disturbing. At no point does the book become respectable. Andre praises Molloy’s work in the highest terms, invoking the names of the two peaks of Franco-Belgian comics: “Moebius meets an evil Tintin. Mindblowing.” Other stand-out books in the Milk Shadow catalogue include Ben Constantine’s hallucinatory collection “Squirt-Stone” and Gregory Mackay’s tales of a frequently inebriated toy bear named Francis. If the books by Molloy and those of the other writers and artists in the Milk Shadow stable are anything to go by, then Australia’s cartoonists are a diverse lot, drawing upon a wide range of sources. Andre agrees:

“Australia has a diverse multicultural mix. Maybe being on the underside of the globe all the best pop culture stuff slowly trickles down here and blends into a tasty sludge on the way. So the reader would see the cheeky humor of a British BBC comedy, the over the top nature of Japanese and US art, and the subtlety of European linework in pacing in many of our books. Plus some unique Aussie style too, without any crass ‘G’days’ chucked in. I think.”

Multicultural influences aside, I suggest to Andre that British humor comics such as the children’s favorite The Beano and its toilet humor cousin Viz may provide a thread of continuity in the Milk Shadow catalogue:

“I think we have a crossover into some genres such as horror, sci-fi, comedy, whilst aiming to maintain a strong sense of artistic draftmanship and storytelling,” Andre replies. “I love experimental work, but also want to take the audience into strange and enjoyable places. Our old unofficial slogan was ‘Make them gag and think,’ and that still applies in some ways. That was a bit long winded, but yes, I do think there’s been some dirty Viz/Mad mag mixed in with our classier art house comic cocktails.” In the early days of Milk Shadow Andre originally distributed his books by hand during his spare time, catching public transport to shops in Melbourne, “…and then hoping that they’d want to take the stock. Generally sweating if they’d remember me from last time, and have some of the cash they might owe me.” He also mailed books to a handful of shops in Canberra and Adelaide. While he still personally handles the distribution of Milk Shadow’s comics and zines, this year Madman Entertainment, the leading distributor of manga and anime in Australia and New Zealand took over retail distribution for the company’s graphic novels.

“A few years ago I was developing a (still unmade) monster movie screenplay, whilst working with a former Madman staffer, who was helping to script edit. He suggested that I approach them regarding book distribution. I did, and we went back and forth over a year and a half. We finally got a deal happening, which has been effective for the past three months. It’s been a lifesaver so far.”

Madman is also a significant player in theatrical distribution and rights management in Australia. With the firm’s fingers in so many pies, does Andre see potential for cross media possibilities? “We’d love to get some animation happening,” says Andre. “Madman handles the distribution side of things media-wise, so to get things moving we’d really need to find a producer. Definitely things like Mr Unpronounceable, Francis Bear, Lesson Master (a book about a small, angry man dedicated to teaching people lessons, such as not to eat loudly in the cinema, or park in disabled parking spaces) and Zombolette (about a zombie girl with a pet guinea pig) would all work well in short Adult Swim style episodes, or even a larger anthology show like MTV’s Liquid Television … [but] we’d need to find the right crew to make it happen. Myself and the creators are all on board though.”

Milk Shadow Books are currently available outside Australia and New Zealand through Amazon and The Book Depository, although Andre says he would like to expand further into the UK, Europe and US. Currently however, he says his focus remains primarily on bringing out strange and interesting work by Australian and New Zealand artists, for the simple reason that: “there are lots of excellent ones on the scene that need somewhere for their visions to be seen.”