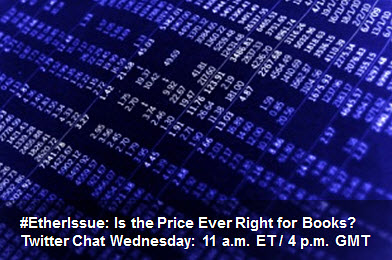 The odd world of #ebook pricing. Are #ebooks too cheap? My thoughts http://t.co/ibO3zzmm4Z

Is the Price Ever Right for Books?

Another way to ask the question: Will the price for books ever seem right again?

If there was any consistent feature of the ebook market in 2013, it was volatility – especially when it came to bestselling ebooks. Prices climbed and plummeted from week-to-week, self-published authors achieved more than one No. 1 best-selling title and a few from “big six” (and later, “five”) publishers clung to the top slot for weeks at a time.

As he wrote that piece, the ranking, in fact, showed Hachette’s ebook edition of Nicholas Sparks’ Safe Haven at No. 1 in late-December electronic bestsellers…and selling for $3.99.

Penguin Random House held the next three top-ebook spots with:

(Remember these prices were in effect as data was gathered for that last report in December. There may be considerable changes at this point. Volatility rules, as Bellis tells us.)

Of the US Top 25 as a whole, three spots were held in the December 26 listing by self-publishers—J.Lynn (who is also J. Armentrout), H.M. Ward, and Rachel Van Dyken — with their top-ranking books each priced at $0.99.

The price of a book is now one pound and everything else is aberrant.

In the UK, Joshua Farrington at The Bookseller is reporting:

In “Catton and Tartt on Nook’s 99p List”, Farrington writes:

Bestselling titles including Eleanor Catton’s Man Booker Prize-winner The Luminaries (Granta), Billy Bryson’s One Summer: America 1927 (Transworld) and Donna Tartt’s The Goldfinch (Little, Brown) are all included in the offer, alongside books such as Khaled Hosseini’s And the Mountains Echoed (Bloomsbury), Charles Moore’s Margaret Thatcher: The Authorised Biography (Penguin) and Chimamanda Ngozi Adichie’s Americanah (HarperCollins). Many of the titles in Nook’s 100 Best Books of 2013 offer are being price-matched on Amazon.

eBook pricing is getting too predictable. I’d guessed that the new Rankin, Eggers and Kynaston would be 99p in the next few weeks. And lo…

And how much does this mean the reader might be saving by buying, say, Catton’s acclaimed prize-winner?

For a title such as The Luminaries, which has an RRP [recommended retail price] of £18.99, the deal offers a saving of 95% on the full price.

Okay, so hold on to these transatlantic thoughts, and let’s look at a few more comments that touch on book pricing.

The top of the year is always about F+W Media’s Digital Book World Conference & Expo preparations for many of us. And with the main sessions set to open a week from today in New York City, the conference’s chairman, Mike Shatzkin, has released a couple of strong pre-conference issues guides—always helpful, both as overviews of current concerns and for insights into Shatzkin’s conference programming.

In Nine places to look in 2014 to predict the future of publishing, for example, he writes:

[A] pressure point on margins [in 2014] will be ebook pricing. It has been driven down by successful self-publishing and the the court’s elimination of agency as a protection. Now big publishers have discovered “dynamic pricing” — lowering prices on a book temporarily to spike sales and awareness — adding their own activity to the list of forces reducing margins. Both the top line and the bottom line will be harder to maintain in 2014, but how it will turn out is an open question. After all, most of these things were true in 2013 and margins still improved.

@JanArrah Here's a good article on ebook pricing from a publisher perspective. http://t.co/pl9HEHLfs4 FYI: I want cheaper ebooks too!

In the bigger picture, Shatzkin assesses the effects of the Department of Justice actions of 2013 this way—and this is a complex set of observations, but worth your time:

We have what would seem to be an unsustainable dichotomy in the ebook marketplace as a result (I would say, editorializing here) of the Justice Department’s lack of understanding about where power really lies in the book business. Apple insists on “agency pricing”: publishers set prices, Apple keeps 30%. Amazon — for everybody except the former Big Six — insists on the wholesale model which gives them 50% of the publisher’s set price to divide as customer discount and margin as they choose. This has resulted in all publishers except the biggest being forced to put two prices on their ebooks: a ”digital consumer retail” price (intended to be a selling price, for Apple, and lower) as well as a “list” price (intended for the retailer to discount, for Amazon, and higher). When the distinction began, the agency price couldn’t be discounted. Now it can so the only real differences are the margins and the hard-to-explain-or-justify publisher-set prices. Only the biggest publishers have the clout to overcome the marketplace power of Apple and Amazon to dictate how the sales structure will work. Everybody else lives in an Alice in Wonderland world. I’d expect something to give on this in 2014.

Getting it down to a much more easily grasped level, Shatzkin in another new post — Publishers do need to sell direct, but here are five things they should at least be started on first—puts it this way:

Setting prices is devilishly difficult. Either you resign yourself to being more expensive than many of the retailers or you compete with them on price. That requires technology and complicates the relationship with the sources of most publishers’ sales. It also means the “additional margin” you’re aiming to capture might not be as much as you hoped.

An author friend in the UK just this week has told me that she feels £4.50, or some $7.40 in US dollars, is about has high as she can price the ebook edition of her new novel.

We’re of course past the period when there seemed to be a dependable, beneficial reaction even to free-book promotions. That’s not to say that a free book won’t clue in some new readers to your work. And many writers are giving away the first book in a series to capture sales for later installments. There are just about as many ideas of the next formula worth trying as there are independent writers in the marketplace, it seems.

@thecreativepenn Thanks for your advice on not letting Amazon auto-set India ebook prices in your podcast interview with @minalh. Helpful!

But as algorithmic changes have adjusted the playing field in online settings—remember that self-publishers were the leaders in the dynamic pricing that Shatzkin mentions in regards to traditional houses—it’s become harder to predict the response to various pricing approaches online, free or otherwise.

One of the more consistently heard voices in debates about self-publishing and pricing has been that of Mark Coker, founder of Smashwords. And he gets right to pricing—as in Nos. 1 and 2— of his 14 prognostications for the new year: 2014 Book Publishing Industry Predictions – Price Drops to Impact Competitive Dynamics.

As I did with Shatzkin, I want to give you Coker’s two points specifically on pricing at length, not least because as Shatzkin is talking dynamic pricing at the big houses, Coker is talking about self-publishers losing their one-time ownership of low-balling. Where you see a little emphasis, that’s mine:

And that looks to me like a good place to throw this open to our fearless #EtherIssue readers.

The Good And Bad In Chaotic eBook Pricing: http://t.co/bRuj1Bey7H @techdirt

A few questions you might think about ahead here, sure, but as usual, we want you to take the discussion Wednesday where you’d like it to go. Just to be sure we get the hand-wringer in there, too, I’d start this way:

As usual, I’m framing these questions to pique your interest, I hope, in joining us live on Twitter on Wednesday. We’d love to have your input. 11 a.m. Eastern, 8 a.m. Pacific, 4 p.m. GMT on hashtag #EtherIssue — see you then.

As you’ll recall, just before the holiday break, we looked at the so-called “flattening” of the ebook market some claim is ongoing. You can review our recap of the “live uproar” we all enjoyed on that one in #EtherIssue: Counting Ebooks in a Writer Wonderland.

During that conversation, New Islands Books commissioning editor Eoin Purcell let us know that he’d be writing a bit on the topic. And he has done just that. In Word for Word: Don’t buy the myth about ebook slump for The Irish Times, he adamantly resists the idea that ebook sales are falling. Purcell writes:

One of the problems is that ebooks have become so large a market, more than $1 billion in the US alone in 2013, and have grown so quickly, that even large increases now appear quite small in percentage terms, and modest increases seem tiny. Ebooks outside of the US continue to grow – markets such as Ireland, France, Spain and Germany are only now beginning to see the growth that the UK & US markets experienced two and three years ago. That growth has not been factored into AAP figures. If it had been, there would have been no pieces about falling ebook sales.

Purcell is advising his readers to disregard any assertions that ‘e’ is failing and ‘p’ is bouncing back:

Ebook sales are not falling, the print book is not roaring back into vogue and the trend of stories about their perilous future is just a passing one, to be forgotten as soon as the full story can be told.

Porter Anderson is a Fellow with the National Critics Institute, a 32-year journalist with several newspapers and three networks of CNN, as well as a producer posted to the Rome headquarters of the United Nations’ World Food Programme. This column, Ether for Authors, appears here at Publishing Perspectives on Tuesdays. Anderson’s Writing on the Ether is read on Thursdays at JaneFriedman.com, and he is a regular contributor to WriterUnboxed.com. He writes the Porter Anderson Meets column (#PorterMeets) weekly for The Bookseller‘s Friday magazine in London with a live Twitter newsmaker interview on Mondays. More about him is at PorterAnderson.com. Find him at Google+