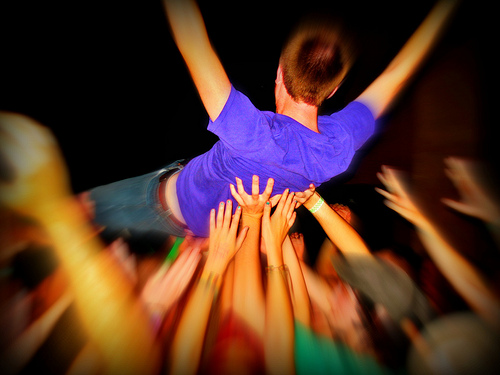 Writers are seeking editing assistance from the open internet, a practice that might just be enough to lift their books above the throng. (Photo: Mike Krzeszak, Creative Commons)

In today’s feature story, “Reflections on Becoming a (Self) Publisher,” writer Nick Ruffilo notes his “surprise” at “the value [he] found in the editing process,” noting, “With good marketing, you can sell content, but good content is easier to sell and will help sustain sales.” Walter Isaacson is crowdsourcing the editing of some entries for his new book.

Publishers will tell you that good editing is a hallmark of having a superior publishing experience. And today self-publishers are  seeking out their own freelance editors in the pursuit of a more professional product.

Today, Walter Isaacson, who is best known for his biography of Apple founder Steve Jobs, is trying a different tact: he’s crowdsourcing the editing for several entries for his new encyclopedic history of innovators. You can find one entry on LiveJournal, one on Scribd, and three on Medium. Isaacson told Bloomberg BusinessWeek he sees it as a return to the “original intention” of the internet, which was collaboration.

Unlike Wikipedia, he isn’t allowing for direct editing, but has solicited “comments, notes and corrections.” Isaacson says he’s received hundreds of substantive posts and thousands of early readers.

In addition to being practical for building the books, it’s a wonderful audience-building/PR exercise.

Is this a process that could only apply to encyclopedic content, much like Wikipedia? Could it also work for academic texts, STM texts, narrative nonfiction? How about fiction? And are we likely to see more of it in the future?