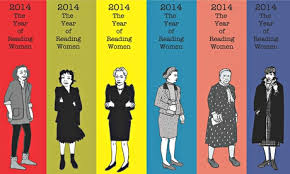 Several campaigns have started this year to encourage readers to pickup and appreciate more books by women writers. In ways large and small, The Guardian reports, from one literary journal’s promise to spend the year covering women writers (and writers of color) to Joanna Walsh’s rapidly growing #readwomen2014 project, “readers — and publishers — around the world are starting to take their own small steps to address male writers’ dominance in the literary universe.”

Everyone is familiar with the numbers showing the “huge imbalance” in the way male and female writers (and reviewers) are treated. As figures from Vida showed, in 2012 just 16% of the reviewers in the New York Review of Books were women, and only 22% of the books reviewed were written by women. In the UK, a mere 8.7% of the books reviewed in the London Review of Books were by women.

So in response, Daniel Pritchard, the editor of the American journal the Critical Flame announced an entire year “dedicated to women writers and writers of color,” saying that “nothing will change if people do not act morally within their sphere of control.”

“Women writers and writers of color are underserved and undervalued by the contemporary literary community,” he wrote. “Silence on this literary disparity has not been the problem of the past few years. Inertia has. Many editors seem immobilized by their options: they either admit their failings and allow a bruise to the ego, or brush off the critique with grand claims about quality and editorial judgment…So, while the Critical Flame may not be a powerhouse of the literary world, we have decided to embark on a project that will help our readers, at the very least, perceive and evaluate the literary landscape differently.”

And Jonathan Gibbs, an author and journalist began his own women-only reading rule last year, after, he said, “reading Ben Lerner’s Leaving the Atocha Station and basically getting peed off with that self-reflexive, ‘I know I’m shit and that makes me great’ male narrator type story.”

“I was aware that my ‘favorite’ contemporary authors were largely men (Marias, Knausgaard, DeLillo, David Foster Wallace, Geoff Dyer) who wrote about the world through the filter of male consciousness, and I was also aware that the book industry and media largely colluded in, or constructed, my idea that these guys were the best.

“So, the ‘women only’ rule was really just a way to force myself to properly look into the question of whether there were women who wrote in a way that responded to my need to see myself in the books I read. If yes, then either I was an idiot, or the books world was sexist, or both. If so, then we’re into the kind of Venus/Mars/female/male brain debate that is never far from the headlines, but which I don’t really understand enough about.”

Of course, so far, Joanna Walsh’s #readwomen2014 project has garnered the most attention. It began simply enough with Christmas cards that named 2014 “the year of reading women,” and listed 250 female authors ranging from Angela Carter to Zadie Smith, asking recipients to ‘if not vow to read women exclusively, look up some of the writers I’ve drawn on the front or listed on the back.” But demand for the cards grew and grew, along with suggestions on Twitter for other female authors that should have been included.

As she wrote in her blog piece for The Guardian, “Will #readwomen2014 change our sexist reading habits?”:

“I worried that tweeting the names might seem polemical, even boring. After Caroline Criado-Perez’s experience of cyber bullying during her campaign to have Jane Austen appear on the ten pound note, I was also a little nervous. But, within minutes, women — and men — were adding their own favorites to the list. The meme was passed on until the list of names doubles, then trebled. This was something people cared about. It also felt as if they were having a lot of fun.”

Do you believe that female literary writers are generally under-appreciated by the media and readers? If so, will campaigns like the ones described above work to expand readers’ horizons? Let us know what you think in the comments.