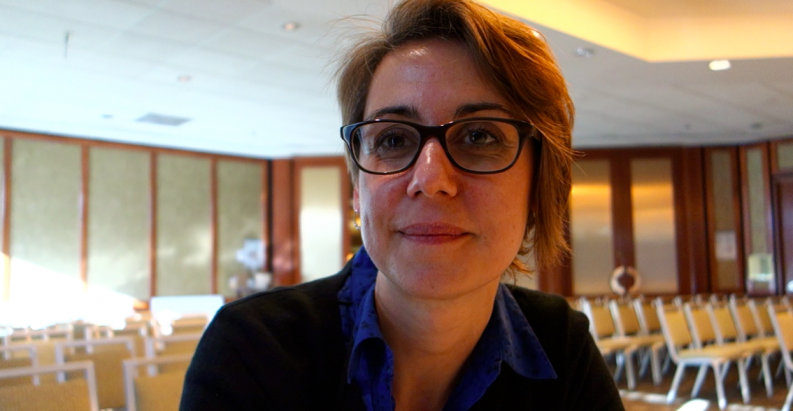 Sophie Saint-Marc of Alire in France was particularly impressed with the American booksellers’ engagement with their communities.

Independent bookstores in America are flying high and many are reporting, at least anecdotally, that 2013 was their best year yet. Several have seen gains of 15% or more over the December of the previous year, according to anecdotal conversations at this year’s Winter Institute — the annual convention for indie bookstores organized by the American Booksellers Association (ABA) held in Seattle this week.

The fifth iteration of the Winter Institute was the biggest yet, drawing some 500 booksellers from across the United States. It was also the first year where the international community was invited, with several booksellers and representatives of bookseller associations flying in from Canada, Australia, Guatemala, New Zealand, Ireland, the UK, Denmark, Germany and France to try and glean from the American indies’ success.

What is the attraction? The simplest answer now is that the bookselling world is flat. Just look back on comments at Digital Book World from Simon & Schuster CEO Carolyn Reidy attributing much of her company’s growth the the increased sales of English language books overseas.

Marianna Moller of the Kristian F. Moller bookstore in Aarhus, Denmark acknowledged that English language books are, indeed, popular in Denmark. “That has always been the case. But the problem is that people are buying them over the internet from the UK. We stock them, but when they buy them from us we have to mark them up with 25% VAT, so customers buy them online and have them shipped so they don’t have to pay that tax. We have an open market and no fixed book prices, so price, price, price is always a consideration for the customer.”

Bookselling industry newsletter Shelf Awareness has taken note of the market overseas as well, and is expanding abroad with its program of customized marketing newsletters for bookstores. Among their first clients are the American Book Center in Amsterdam, Antoine Online in Lebanon, and Kinokuniya in Singapore. Oren Teicher of the ABA convinced Philippe Hunziker (pictured) to fly to Seattle from Guatemala City, Guatemala to attend the ABA’s Winter Institute.

Among those Teicher persuaded to attend the Winter Institute was Philippe Hunziker of the Sophos bookstore in Guatemala City, after they met at FIL Guadalajara. “I’m here to learn from the Americans who have been very successful in keeping their business thriving. I am convinced that there is a lot I could learn a lot from what the Americans. One of the things I’m trying to do here is learn how the ABA functions so I can help start forming one in Guatemala. We need associations in Latin America. I’m also going to try and persuade other bookstores in Guatemala and the region to join the EIBF.”

Sophie Saint-Marc of France’s Alire, where she is responsible for informatics for French independent booksellers, came to investigate new technical solutions. She noted that the French system can already handle print, print-on-demand, and ebooks, though demand was almost exclusively for print. She was especially impressed by the Americans’ ability to build up the community to support local bookstores. “We don’t have anything like that in France. We don’t have book clubs, for example. That’s a great idea: a large group of people reading together as a community. We really should do that.”

What’s important to note is that several American booksellers see their community in broader terms than just their immediate customers.

At a luncheon hosted for the independent community by several former ABA presidents, Mitchell Kaplan, owner of the Miami-based chain Books & Books, said he views his bookstore as a gateway to Latin America and the Caribbean.

“Our commitment to serving the local community, many of who speak Spanish,” said Kaplan. “It’s a big community that is extremely diverse with people from all over the region; we sell lots of books in Spanish and present authors in Spanish, with no English component. We embrace the community in that way so they can feel a part of it.”

As for the gateway part, Books & Books has operated an franchise in the Cayman Islands for several years. “We shipped it over in a container,” said Kaplan. “It’s really amazing.”