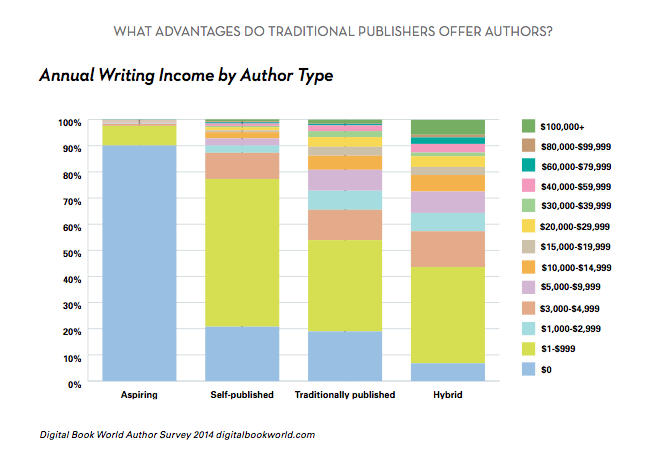 The Guardian’s Alison Flood reported on a publishing industry deeply divided. In the same week, she noted, that writer of erotica Sylvia Day signed a startling eight-figure two-book deal with St Martin’s Press, a survey revealed that 54% of “traditionally-published” authors (and nearly 80% of self-published authors) earn less than $1,000 a year.

The survey of more than 9,000 writers in the 2014 Digital Book World and Writer’s Digest Author Survey, was presented at last week’s Digital Book World Conference. Respondents were divided into four categories: “aspiring, self-published only, traditionally-published only, and hybrid” (meaning both self and traditionally published). Of those who filled in the survey, more than 65% described themselves as aspiring authors; 18% as self-published, 8% as traditionally published, with 6% saying that they were “pursuing hybrid careers.”

According to the survey, “Just over 77% of self-published writers make $1,000 a year…with a startlingly high 53.9% of traditionally-published authors, and 43.6% of hybrid authors, reporting their earnings are below the same threshold. Only 0.7% of self-published writers, 1.3% of traditionally published writers, and 5.7% of hybrid writers reported earning more than $100,000 a year from their writing. (The typical writer in the sample was “a commercial fiction writer who might also write non-fiction and who had a project in the works that might soon be ready to publish.”)

The Guardian reported that Jeremy Greenfield, Digital Book World editorial director and one of the report’s co-authors confirmed the finding that “authors of all stripes, but particularly self-published authors, don’t earn huge sums of money doing what they do.”

“Most writers,” Greenfield said, “write because they want to share something with the world or gain recognition of some sort. There are, of course, outliers. The top 2% or so of authors make a good living and the most successful authors – including self-published authors – make a tremendous amount of money.”

Greenfield’s co-author, professor Dana Weinberg, agreed that “The question of money is a tricky one. Publishing a book for sale is a matter of both art and commerce. I would agree that for most writers publishing is not only about money; it’s about a lot of other things including touching readers and sharing stories, but the money is important in a lot of ways.

Weinberg added that the dream of quitting one’s job to become a full-time writer is, in fact, a reality for only a small number of writers. “Writing good books is a big time commitment, as much for many writers in the survey as a part-time job, and income gives writers something to show their family and friends for all their effort and hard work. Some writers are looking for validation, and in the world of self-publishing where you don’t have the prestige of being chosen by a press, the money is a tangible and rewarding substitute.”

But perhaps not surprisingly, there are those who felt that the survey wasn’t exactly fair to self-publishers. Hugh Howey, whose self-published dystopian novel Wool sold hundreds of thousands of copies on Amazon before being bought by Simon & Schuster, had this to say:

“This survey does not capture the fact that self-publishing is going through a renaissance. It expects a group of authors with two or three years of experience and market maturity to line up against the top 1% of authors who have had several generations’ head start…The simple fact is this: getting paid for your writing is not easy. But self-publishing is making it easier. How much easier? We don’t have sufficient data to know. But a conservative estimate would be that five to 10 times as many people are paying bills with their craft today as there was just a few years ago. And that should be celebrated.”