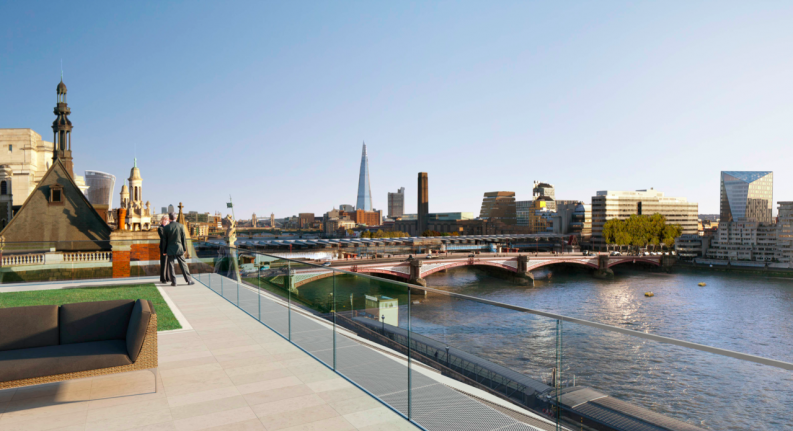 Hachette and Harper Collins in the UK are moving into impressive new buildings in London, projecting an aura of confidence and seriousness about their futures.

LONDON: It’s the battle of the roof terraces, the war of the atriums, the skirmish of the specifications. London publishers are on the move, taking space in some impressive buildings on both sides of the Thames. The websites of these glass palaces ooze a poetry all their own. ‘Bespoke acid etched black back painted glass system with frameless glazed balustrading to open atrium’, gushes the developers of Carmelite Riverside, soon to be home to Hachette UK. On the south side of the river, HarperCollins UK will join other News Corp businesses including The Times and Dow Jones in a new development near London Bridge called The Place. Its website entices with ‘Thermally efficient envelope, photovoltaic array mounted on roof, natural ventilation in winter gardens.’ Never mind the books, feel the offices!

For watchers of the publishing scene in the capital, these moves are of interest: they chart the rise and fall of parts of the city, and demonstrate perhaps, the contrasting messages companies want to broadcast about themselves. Not so long ago, Bloomsbury UK moved into a line of splendid, listed, Georgian houses in Bedford Square, close to the British Museum. It seemed appropriate for the publisher of Harry Potter. These offices weren’t quite Hogwarts, but with their ancient banisters and giant doors, they more reminiscent of the famous school than any steel and glass tower.

The history of the UK publishing industry is etched out in London’s ancient streets. Curiously, we are about to enter a period when the four main houses in the country will all be dotted along the Thames – from Random House by Vauxhall Bridge in the west, to Penguin by Waterloo Bridge in the very centre of the city, Hachette just a little further along on the Embankment, and then across the river to Southwark, where HarperCollins will move into the building affectionately known as the ‘baby Shard.’ HarperCollins’ new home, The Place, sits right next to the fabulous and iconic Shard tower, which, at 1,004ft, is the tallest building in western Europe. One could almost imagine a cataclysmic power and mobile communications failure in which these houses are unaffected because they can communicate with each other by mirrors and sunlight from roof terrace to roof terrace.

Hachette plans to bring all its imprints under one roof later this year or early in 2015. It will retain the historic John Murray building in Mayfair where the current John Murray himself — author of the photographic study London Above Eye Level (Frances Lincoln) — has an office and where Byron’s memoirs were famously burnt in the fireplace (still there) in 1824. Carmelite Riverside takes its name from the Carmelite monastery that stood here in the late 14th century. Its relatively recent history is no less fascinating, and rather appropriate.

Carmelite House, as it used to be known, was the home of the Evening News and Daily Mail, from 1902 to 1927. The newspapers were even printed here, with great rolls of paper being brought over by ship from Grand Falls, Newfoundland, the model town founded by the Mail’s owner Lord Rothermere who established a paper-making plant here. They were then taken up the river and off-loaded on to steam lorries that would trundle up the Embankment. A series of panels on a neighboring building relates how the papers were printed and provide a fascinating glimpse of what were then new technologies, just as shortly, Hachette staff will be discussing book publishing’s own new technologies here themselves. Back then, the surrounding streets were said to reverberate with the clanging and thumping of the printing presses; when Hachette move in, it will be the silent thumbing of tablets.

Hachette’s new office is also just around the corner from an almost forgotten piece of literary history. Neighboring Bouverie Steet was home to Punch magazine for many years. In 1907, at the end of his last visit to England, Mark Twain came to the magazine’s offices here for a special lunch in his honor. He was invited to carve his initials in the magazine’s famous table but, seeing those of W M Thackeray, quipped: “Two-thirds of Thackeray will do for me.” James Thurber, whose Walter Mitty currently lives again, thanks to Ben Stiller, was honored by the magazine in 1958. He was by then nearly blind, but managed to carve the ‘Th’ with which he used to sign his cartoons.

Close by too, is St Bride’s where Pepys was baptized. This is the so-called ‘Journalist’s church’ and among the many in memoriam plaques on the pews inside is one for Edgar Wallace, the British journalist and co-creator of Tarzan. These locations will be just a lunchtime stroll away for staff — it’s part of what working in cities is all about (and makes up for the commuting). The Shard and new HarperCollins building, The Place, to its left.

HarperCollins is moving to an area of Southwark being billed as ‘London Bridge Quarter,’ a huge regeneration product largely funded by Qatar. Such developments, and News Corp’s decision to participate, shows how some of the focus in the capital is shifting east. The Bookseller relocated to Southwark last year and Man Booker publicists Four Colman Getty are here too. The area seems to have more lifestyle cafes, designer boutiques, wine bars and restaurants with every passing week. As a part of London in which to work, it has much to offer, with Tate Modern close-by and numerous pop-up entertainments all along the South Bank.

New Corp’s move is a serious one. It has signed a 30-year lease on the building, so this is a location that will most likely see out all the current HC staff (including CEO Charlie Redmayne, who is surely destined for larger roles, either within News Corp or the wider world of media and content). Just contemplating that number makes you wonder what the industry will look like in 30 years.

Do buildings matter? Well, they are places of work for large numbers of people. They are where interactions take place, ideas are hatched. The arguments in favor of offices — especially open plan ones such as Penguin’s, whose imposing, cliff-white building opposite the Royal Festival Hall affords some of the best views of the river — are the same as those in favor of book fairs. We are sociable beings, conversation leads to ideas.

Much thought goes into the design and layout of offices. Before Little, Brown moved into its current building in 2007, its Chief Executive Ursula Mackenzie and the then Marketing Director Roger Cazalet visited the Swiss designers Vitra in Basle to look at open-plan layouts. At the time, Cazalet noted: “[Open plan] gives you a greater sense of freedom and it’s a more egalitarian way of working. Communication will be a lot better too. When you have separate offices you e-mail a lot, rather than leaving your desk. It also means we can cut down on the number of printers we have, which is more environmentally friendly. At the moment there are something like 60 printers. In the new offices, we’ll have print areas where groups of people will share printers.”

However, a recent article in The New Yorker discussed the noise and multiple distractions of open plan working and its affect on output. Certainly, we’ve all had to become adept at tuning out. Researchers found that at a Finnish telecommunications company, younger workers in particular “believed that the trade-offs were ultimately worth it, because the open space resulted in a sense of camaraderie; they valued the time spent socializing with co-workers, whom they often saw as friends.”

History certainly becomes written into buildings and location too, and is often why we visit cities. Hilary Mantel, Jonathan Franzen, Bernard Cornwell and authors yet to be famous will all surely visit HarperCollins’s new offices, just as Stephen King and John Grisham et al will come to Hachette. Both these buildings will become part of the cultural history of the capital that will be mentioned in guidebooks and perhaps photographed by literary tourists — even if now they might seem more faceless corporation than home of words.