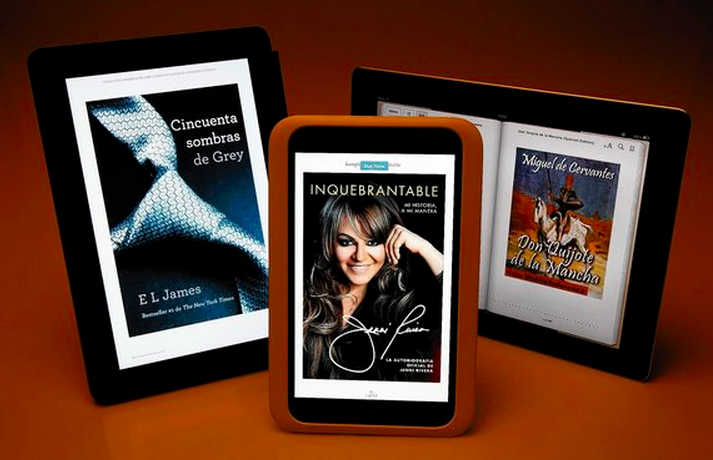 Spanish-language ebooks are exploding in popularity in the US (Image: Los Angeles Times)

This has to be considered a very good thing. According to a report in The Los Angeles Times, thanks to the explosive growth of devices such as Amazon’s Kindle and Barnes & Noble’s Nook, publishers are now for the first time, able to offer the United States’ 38 million Spanish speakers Spanish-language content – “often at a fraction of the cost of printed versions.”

As Ken Bensinger explains, “It’s the latest twist on the disruptive power of digital publishing. But in contrast to printed books in English, which have lost sales to cheaper electronic versions, ebooks in Spanish are delivering content where little existed before.”

It is telling that over the last two years the number of Spanish-language titles available online in the U.S. has tripled. The Times notes that imported hardcover titles such as Alvaro Mutis’ “Maqroll” trilogy, that once retailed for over $100 can now be found online for less than 15 bucks. “And entire genres of Latin American literature — think contemporary Ecuadorean poetry – that were all but impossible to acquire at any price are now a few mouse clicks away.”

Of course, sales of these Spanish language titles are still relatively small — accounting for less than 5% of the nation’s $7.1 billion in annual sales. Even so, recent growth has inspired more investment.

Publishing Perspectives’ editor-in-chief Ed Nawotka told The Times, “There has been a real shift. I see confidence in the market that has never been there before.”

And statistics indicate that there’s a reason for this. A recent study by the Pew Research Center’s Internet and American Life Project showed that Latinos are buying and using tablets and e-readers at rates far faster than the U.S. population as a whole: In 2011, around 1 in 20 Hispanics owned one; in 2012 the number had skyrocketed to 1 in 5.

Patricia Arancibia, an expert on the Spanish-language book market and founder of Barnes & Noble’s Nook Books en Espanol site told the Times that, “That study gave a lot of people belief that this market could work,” adding that prior to 2010, there were only around 10,000 Spanish-language print titles in available at online bookstores out of a total of around 650,000 Spanish titles worldwide.

In fact, Amazon reports that sales of its foreign language ebooks in all English-speaking markets were expected to rise a startling (and impressive) 40% in 2013 as compared with 2012. And Amazon’s subsidiary, Audible.com, reported that its foreign-language audio book sales are increasing a rate of more than 25% per year.

Carmen Ospina, director of development at the Barcelona based Random House Mondadori, told Bensinger that the U.S. makes up 19% of the publisher’s total ebook sales, as opposed to less than 10% just a year ago.

As a sign of increased confidence, Ospina said that Random House Mondadori would be publishing in Spanish Isabel Allende’s latest novel, El Juego de Ripper, simultaneously in the U.S., Spain and Latin America, with a Kindle or Apple iBook available in the U.S. for just $9.99, around half the price of the hardcover edition.

“Digital removes all the obstacles you have with a printed book,” she said.