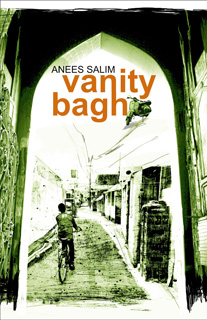 Anees Salim has won The Hindu Prize for Best Fiction 2013 for his second novel, Vanity Bagh, which was cited by The Hindu for its ‘consistent writing and humour and imagination.”

Jury member writer Timeri N. Murari said that “The book is a very comic account of a young man from a minority group from a place called Vanity Bagh, also called Little Pakistan. It is about physical cities, both real and imagined.”

The Kerala-based writer’s book won out over four other titles: Manu Joseph’s The Illicit Happiness of Other People, Manjul Baja’s Another Man’s Wife and Other Stories, Sonora Jha’s Foreign, and Amandeep Sandhu’s Roll of Honour. (Manu Joseph won the very first Hindu Prize for Best Fiction in 2010 for his debut novel Serious Men.)

The announcement was made by novelist Jim Crace at the valedictory session of The Hindu Lit for Life, and Salim was represented at the event by his publisher, Pranav Kumar of Picador.

In an interview earlier this year with The Kindle magazine, Salim talked about his work:

The main character in this novel is named Imran Jabbari, the son of a local Imam. How did this book come about? Did this story grow out of your own experiences, or of someone you knew from your childhood?

This book happened without warnings. I was trying to write another book and had even sketched a few characters for it. The setting was my hometown and the story was about a gang of young men who aspired to be dons. Half way through the novel, I realized that the setting was wrong; my hometown was small and sleepy, and didn’t have any potential for organized crimes. So I discarded the story, but kept the characters, and when I started writing the next book I gave them a bigger city and bigger things to accomplish.

Did you think such characters inhabiting small towns and Muhallas, especially from the Muslim community, are missing from the novels written in India, or at best portrayed as victims written as margins of a larger story?

I don’t know if we have enough pieces of fiction on the Muslim community. But in all my books Muslims characters play important roles. I write about them because I have a decent understanding of their apprehensions, crises and misunderstandings. In fact, one of my editors thinks I write quite convincingly about Islam and she encourages me to mine deeper.

You have said, ”Inside every big Indian city, there is a tiny Pakistan”. That is a telling line. As a writer, who is also a Muslim, do you feel Indian Muslims — and their stories — have struggled to find acceptance and readership in the Indian mainstream?

“Let’s face it. We live in a country where two faiths coexist in mutual distrust. They hate and mock each other behind closed doors. As a writer this divide has always fascinated me; its fallouts are sometimes shocking, sometimes funny. For instance, many Muslim neighborhoods in India are secretly referred to as Little Pakistan. And every time a terrorist act takes place in India, Muslims think they are frowned upon, stared at, secretly held responsible for. And to answer your question, religion can neither improve a writer’s chances nor ruin them.”

Before your books came out, you were consistently rejected by publishers for two decades. How difficult was it to continue writing during those years? Did you ever think of not sending your manuscripts to the publishers given the rejection letters? Or did you enjoy writing during that long period of solitude?

“In my opinion, if a rejection letter can end your writing career, it should be the first one. If you survive that one, you can very well survive hundreds of them that might follow. The rejection mails did shatter me, but they strengthened me as well, and inspired me to write better.”

The Hindu Prize for Best Fiction is given to recognize the contribution made by Indian authors to literary culture. The recipient receives a cash prize of Rs.5 lakh and a plaque.