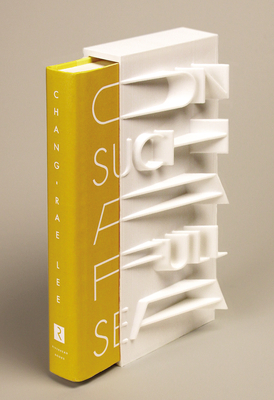 According to Rouse, the plastic words in the title “literally jump off the page, turning the novel into more of an art piece than a practical inhabitant of the bookshelf.”

A video produced by MakerBot features Riverhead’s Art Director, Helen Yentus, explaining the thought process that went into the cover:

“We’ve talked a lot about, in the last couple of year, of, well what’s going to happen with books and cover designers if covers aren’t necessarily going to be the focus anymore? But, what I’ve found is we’re actually looking for new ways to present our books. It gives people the opportunity to have something to hold on to that is not available in digital form.”

And while Lee himself approves of the idea, writing on MakerBot’s blog that “What I like about [the slipcover] is that it revisits the book as an object,” Rouse, who titled his piece “Publisher markets traditional print book by making it even more impractical, expensive,” thinks differently:

“The chief complaint about traditional books,” he writes,” has always been that they are too bulky and expensive in comparison to their electronic counterparts. With that in mind, is it wise to create a book with the build of an impossibly awkward cheesegrater? Not to mention the price. On Penguin.com, this special edition sells for a whopping $150, right next to the regular hardcover which costs $27.95, and the eBook, which goes for a cool $14.99. This is what Tyra Banks is talking about when she says to ‘own your flaws.’”

On the other hand, Scott Esposito at Conversational Reading disagrees with Rouse, and sees the value for publishers with that additional level of price structure:

“I don’t really get this attitude at all. If you can find someone willing to pay you $150 for the 3-D slipcased edition of your book, fantastic! Win for you. If you can find someone who will pay $27.95 for the hardcover edition, then well done! And if you can find someone to plunk down $14.99 for the eBook, success! Riverhead selling Chang-rae Lee’s new novel On Such a Full Sea simultaneously at multiple price points is nothing more than a publisher trying to do what every other retail enterprise in the history of capitalism has wanted to do: price discriminate, aka, get people who will pay more to pay more without missing the chance to sell to people who will pay less. This is the exact same logic that makes publishers release the hardcover before the paperback.”