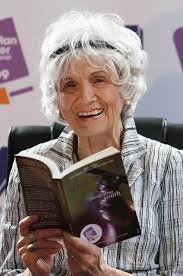 Volume of Alice Munro titles sold before and after winning the Nobel Prize.

A report from BookNet Canada, done in conjunction with Nielsen Book shows that when Alice Munro won the Nobel Prize in Literature, sales of her books skyrocketed, not just in her native Canada, but internationally.

The report, “Alice Munro at Home and Abroad: How the Nobel Prize in Literature Affects Book Sales,” (PDF) compares sales data for her titles in ten countries, both before and after the announcement of her Nobel win. Canadian sales were provided by BookNet Canada; Nielsen Book provided figures for Australia, India, Ireland, Italy, New Zealand, South Africa, Spain, the United Kingdom, and the United States. Alice Munro: a most deserving winner of the Nobel Prize for literature.

It is probably not surprising that the increase in sales was most pronounced in Canada: when comparing sales in the week ending September 21, 2013, to the week ending October 19 (the week after her win was announced on October 10), her sales increased by a most impressive 4,424%. This increase was, no doubt, helped by availability: the paperback of her latest collection, Dear Life, was published in North America just two days prior to the Nobel announcement. “Since Dear Life was coming out that week, bookstores in Canada had ample stock on hand,” said Pamela Millar, BookNet’s Director of Customer Relations. “Therefore, they were better positioned to meet the increased demand for Munro titles when her Nobel Prize win was announced.”

And since Alice Munro was unable to attend the prize ceremony in person, she sent in a videotaped interview. Watch it here.