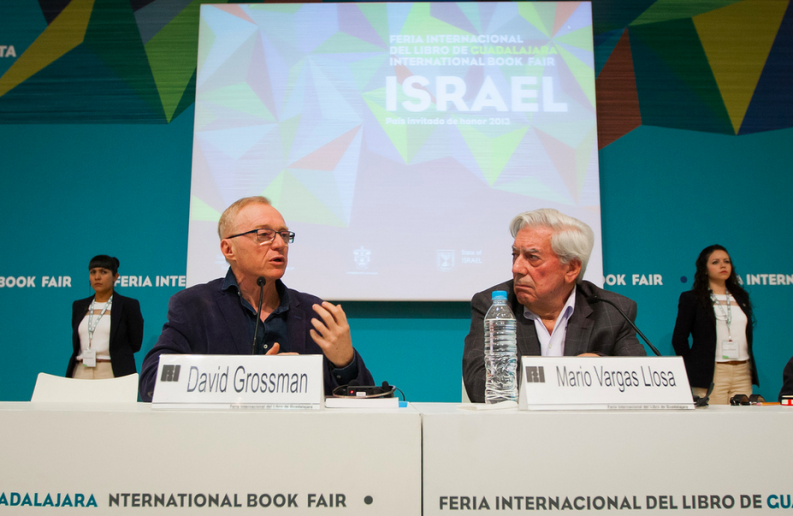 David Grossman and Mario Vargas Llosa engaged in a spirited discussion during the first day of FIL Guadalajara, where Israel is the Guest of Honor. (Photo: © Courtesy FIL Guadalajara / Marte Merlos)

GUADALAJARA, MEXICO: The world and the media bombard us with irrelevant information, and writing is finding the relevant issues and confronting them, said Israeli author David Grossman in conversation with Mario Vargas Llosa during the opening session of the Literary Salon at the Guadalajara International Book Fair on Sunday.

Rather than escapism, Grossman described writing as a way of facing up to things placing oneself in each situation. “To write is to be in each situation. There are so many temptations in life to not face the harsh reality or the tragedy, but life is so short that the way to be is to write about the reality,” he said, underscoring that all his books deal with the contemporary reality in Israel and reflect his stance as a left-wing pacifist fiercely critical of the Israeli government’s treatment of Palestinians.

Israel is guest nation of honor at this year’s FIL Guadalajara, the largest in the Spanish-speaking world.

“A writer feels claustrophobic in the words of others and by writing they are bringing reality into the private domain, recreating it a story. Suddenly the arbitrary and unapproachable reality becomes your own,” Grossman said.

“How lucky we are, as writers, to be able to make the world our own,” he added, a sentiment echoed by Vargas Llosa, who dismissed the myth that writing is a tortuous pursuit.

“Writing produces immense happiness. There is no act more beautiful than sitting down to write. Literature is the best thing that ever happened to humanity, by giving us the opportunity to enter the world of our desires and for those of us not happy with our lives to invent others,” the Peruvian Nobel Prize-winner said.

We writers are very privileged to be able to enrich the poor lives that we have by telling stories,” he added, criticizing those who regard reading as a simple diversion.

“Reading is not just an activity for holidays or for free time. Literature awakens the critical spirit within us, as well as the awareness that the world is not as it should be,” Vargas Llosa said.

Writing as a Responsibility

“Literature is not simply a gratuitous pursuit. Words leave a mark and provoke change, and therefore the writer has a great responsibility, not just to create a beautiful work of art, but also to influence reality. Any young Latin American in the 1950s would have wondered why bother writing, with so much poverty and illiteracy, but one also writes for the illiterate, in the hope that by doing so, one can influence a change in society,” he added, recalling his first trip to Israel in the 1970s when, it seemed, “all Israeli writers were writing with that responsibility in mind, including David Grossman, with his discreet heroism.”

One also writes for the illiterate, in the hope that by doing so, one can influence a change in society.

Vargas Llosa described Israel in the 1970s as the only country where he felt like a left-winger, having become disillusioned with the left-wing in Latin America “and in the West in general,” and where Grossman’s books, dealing with the Palestine-Israel conflict, were a way of confronting intolerance.

Grossman described his homeland, where he was born in 1954 and has lived ever since, as not feeling like home. “The country’s borders have shifted so many times with each war that it’s like living all your life in a house with moving walls. Only by living in peace with our neighbors, the Palestinians, can Israel feel like home, without us feeling like occupiers, without feeling like foreigners.”

“Palestinians have the natural right to a state and a society, to a homeland, and I wish they could have a normal life without the burden of occupation. I cannot tolerate the thought that Israel intervenes in their lives, and it casts a shadow,” said Grossman, criticizing the Israeli government’s “on-going failure” to enter into negotiations with the Palestinians.

“Peace for Israel is essential to its future survival. Right now we do not have confidence in a future,” he said.