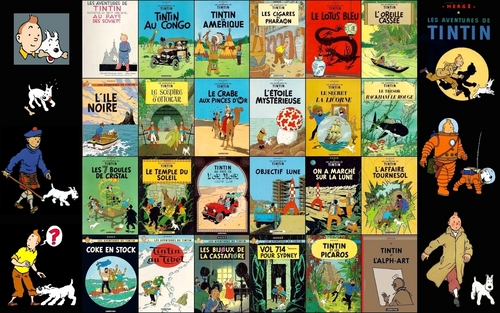 Tintin is one of relatively few BD widely known, but not necessarily read, in the United States.

Japanese manga has proven popular in America, but Franco-Belgian bande dessinée, which has a long a tradition and are just as appealing, remain ignored. Why?

American comic books, and American entertainment in general, can be looked at as historically insular, a byproduct, perhaps, of policies relating to the cultural isolation that took place in this country after the Second World War as it strived to retighten ‘loose morals’ and send Rosie the Riveter back to the coffee maker. While cross-pollination in cartooning in particular was already proliferating between Japan and Europe over the 20th century, the United States, while occasionally borrowing inspiration from elsewhere, did so only passively, preferring instead to keep its own creative industry sequestered from foreign intervention.

Only recently has our culture been exposed to comic books and animation from the East on a noticeable scale. At the beginning of this exchange, back in the late 70’s and early 80’s, an imperative redressing appeared to take place upon acceptable items in order to render them appealing to an American audience. But now, authentic Japanese products in particular have been introduced on their own, without tampering, into our comic book hubs, book stores, and online markets. When it comes to manga and anime in particular the United States has turned a corner in its willingness to embrace foreign influences and, if not emulate them directly, incorporate them into our national aesthetics, much in the same way they have done with us—Disney, for instance, had an earthquake-like impact on the development of Japanese comic books.

Though manga may be becoming more ubiquitous in the United States, however, European comics, originating for the most part from the Franco-Belgian BD — bande dessinée (translation: drawn strips) — tradition, still remain fairly ignored. Franco-Belgian comics culture is considered to be one of the world’s largest and most vibrant. Tintin, for example, originates from that tradition, along with the Smurfs, Heavy Metal, and—even though it’s a well-kept secret—Star Wars.

It’s hard to pinpoint why the American industry shuns its European cousins so thoroughly. It could be because of the fact that American comics are, like American cultural sensibilities in general, still fairly put off by the ostensibly intellectual (read: pretentious) styling of European culture, preferring instead a neoteric, if sometimes impractical, New World mindset.

This funny book barrier could also be a long lasting effect of the now-dead Comics Code Authority, and the lasting effect 1950’s censorship had on American comics. But then again, Japanese manga might simply appeal more to an American creative palate because they, too, share that desire for uniformity in manufacturing structure, producing, for the most part, single sized books. Also, it’s worth acknowledging that Manga is simply more genre-centered in its approach. American comic books have always leaned towards science fiction, horror, romance and fantasy in the mainstream. Japanese manga, while more willing to push the envelope en masse than American comics when it comes to depictions of adult themes, is still widely comprised of speculative hero narratives.

Though this country still continues to export, as opposed to export, creativity, it’s safe to say that whatever we do take in only enriches the structure. Why European comics have yet to meld with its American cousins is subject to speculation, but hopefully with time the barrier will break down.

Samuel Sattin is the author of “League of Somebodies,” a debut novel about one family’s efforts to create the world’s first superhero. (Spoiler: It doesn’t go so well.) Imagine The Doom Patrol cross-pollinated with Philip Roth and then remixed by Mel Brooks. The novel is currently available in paperback from Dark Coast Press; Audible released the audiobook performed by John Keating earlier this month. Sattin is 31 years-old and lives in Oakland with his wife. His work has appeared in Salon, io9, Kotaku, The Good Men Project and he’s currently a contributing editor at The Weeklings, and lives in Oakland, California, with his wife, beagle, and tuxedo cat.