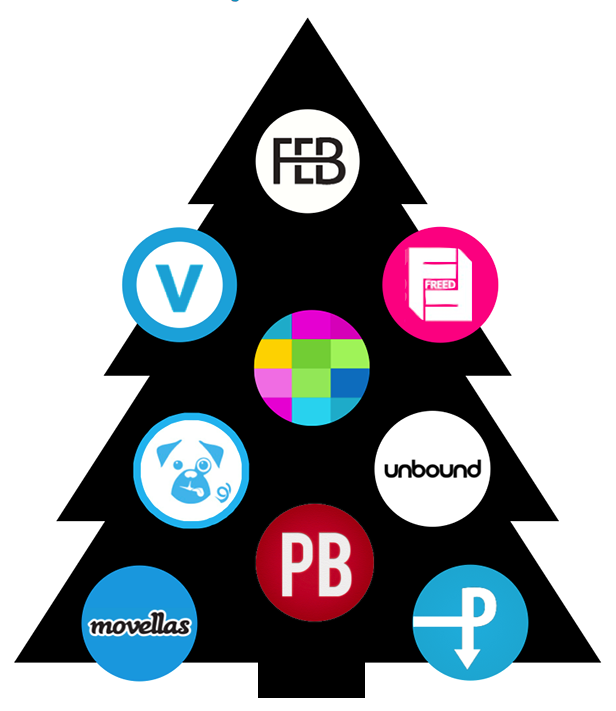 The scene at the Digital Publishing Xmas fair was not unlike at other conference, albeit more festive knowing the holidays were soon to be upon us.

LONDON: Not long ago I was having a coffee at the Shoreditch Village Hall, a startup event space in London, and chatting with James Governor who had set the space up through a Kickstarter campaign over the summer. James mentioned that I could have use of the hall to put on an event, provided it took place before year end. It seemed too good an opportunity to miss, and two weeks later, doors opened on the first Digital Publishing Xmas Fair. Organized on such short notice, it wasn’t obvious that many startups would be able to participate, or that publishers would find time in their busy schedules. But I needn’t have worried. Within a couple of days we had put together a great roster of exhibiting startups: FreedFiction, Jellybooks, Movellas, Padify, PressBooks, Pugpig, Unbound and Valobox. Plus Hachette, FEB Digital and Midas PR had all stepped up as sponsors. And by the time the event kicked off, almost 200 attendees had signed up, including a nice mix of book and magazine publishers.

We decided to go for a fairly informal drop-in format, with short lightning talks and hands-on product demos, but also mulled wine, mince pies, a popup bookshop, and a bit of live music.

Talks on the day ranged across a range of topics including: launching through Kickstarter, HTML5 workflows, location-based content access, new storytelling tools, magazine discovery, product development, continuous publishing, and numerous case studies. George Walkley of Hachette wrapped up with an insightful talk on the challenges of 2014.

It was a lively, conversational event. James told me, “I had no idea publishers were so boisterous!” In the couple of live music interludes, the poor band could barely be heard over the chatter.”

What the event showed more than anything is the vibrancy of digital publishing in London. Long one of the main centres of the publishing industry, it’s perhaps unsurprising that it should be fertile ground for getting new ventures off the ground. What’s also great to see is the way that publishers are increasingly willing to engage with startups, and explore how they might work together. A little music added to the spirit of the season.

Plus it was good to get book and magazine publishers talking together in the same room. As the industry goes digital, there’s a lot of scope for convergence and hybridization, and we saw evidence of that on Wednesday, including a talk from Charles Catton of Amber Books on converting backlist titles into digital subscription products.

Anna Lewis of Valobox: “If you wanted an example of startups moving quickly, this is it! The whole thing was thrown together in record time. The general vibe felt similar to the startup showcase we took part in at the NY Tools of Change Conference last year: structured but informal, with plenty of opportunity for publishers to ask questions. The follow-ups we’ve had since the event also reveal that the lightning talk format was a great vehicle for us to give a taste of the Gift An eBook project we’ve launched with Constable & Robinson. It was a lot of fun too!”

Bill Cole of Freed Fiction: “Like a good Christmas feast, there was something for every taste. Generous helpings of tech and innovation across all aspects of publishing, from magazines to kids apps. Hugely informative and entertaining talks on a refreshingly varied array of subjects with a nice smattering of new voices not yet heard on the circuit of shows and events. Was a pleasure to attend and take part, and we look forward to the next one!”

Michael Kowalski is the founder of Contentment, makers of Padify, a cloud-hosted publishing platform for apps and digital magazines.