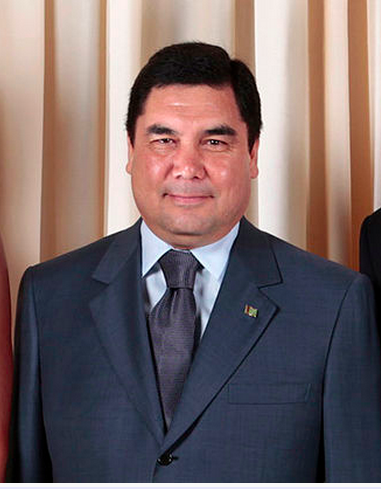 At the dawn of this century, the late and unlamented dictator of Turkmenistan Saparmurat Niyazov became a favorite of news editors hungry for weird stories to fill column inches. Styling himself Turkmenbashi, “the Father of All Turkmen,” the eccentric dictator imposed a series of seemingly arbitrary whims upon his post-Soviet populace, famously banning (for instance) gold teeth and ballet dancing. Turkmenbashi also basked in a personality cult that put Stalin’s to shame. A narcissist of world-historic proportions, he renamed the month of January after himself, and insisted that everyone use his mother’s name, Gurbansoltan Eje, when referring to what had been referred to in earlier, less enlightened times, as “bread.” But in December of that year he died, and the book began a slow retreat from the Turkmen public sphere which only now appears to be reaching its terminal stages. In 2012 the Rukhnama was dropped from university courses. This September it was dropped from school curriculums. Students still need to sit an exam on its contents to gain entry to university, although for how much longer is moot. The cosmic copy of the Rukhnama is still orbiting the earth however, and is expected to do so for another 150 years.

And yet the disappearance of one rotten dictator book from Turkmenistan’s classrooms and bookshelves does not mean that the citizens of that desert land are now free to read whatever they please, however. Oh no. For while current Turkmen president Gurbanguly Berdymukhamedov (who styles himself as Arkadag — “The Protector”) may have a far lower international profile than his infamous predecessor, he too is a successful author, having discovered his hitherto unappreciated literary talents after assuming high office in 2006. And like Turkmenbashi, he enjoys sell-out print runs, effusive praise from local critics and what might fairly be described as a captive audience.

Indeed, the first piece I wrote for this site, back in 2009, was about Berdymukhamedov’s debut book, entitled Medicinal Plants of Turkmenistan (the president had a background in healthcare, having trained as a dentist during the Soviet period). Ten volumes were announced at Ashgabat’s fourth International Book Forum, which you might think would be enough to satisfy his writing mojo for a few years. And yet it seems that Berdymukhamedov is too prolific a generator of words to be restrained by a mere ten-volume encyclopedic project, for since then he has also turned out books on topics as varied as carpet weaving, horses, history and ethnography, according to the Central Asia news site Eurasia.net.

Most intriguingly of all, Turkmen state media announced in October that Berdymukhamedov had just launched his debut novel, The Bird of Happiness, at an event in the grim northern city of Dashoguz. Word that the president was cooking up a work of fiction had been circulating for at least a month beforehand, as Berdymukhamedov had let slip during a September trip to Japan that he was working on a book “…about those wonderful life lessons I learned when I was a child, about those amazing people I was blessed to meet along the way — kind, honest, with high morals, who love their motherland.”

Dictators feel compelled to write books to “prove” their genius and thus justify their absolute power.

Unlike his predecessor, Berdymukhamedov is not especially concerned about foreign editions, and so The Bird of Happiness has not been translated into English and appears to be available only in Turkmenistan. However official Turkmen media statements cited by Eurasia.net do provide us with a glimpse into its contents.

Apparently the novel is about one amazing person in particular — Berdymukhamedov’s father Myalikguly, who at age 81 is still very much alive and kicking, and currently the focus of a second personality cult his son is building in addition to his own. Statues of the former Soviet interior ministry official (read: prison guard) have started popping up in Turkmenistan in addition to those of Berdymukhamedov junior, not to mention the countless monuments in honor of Turkmenbashi which are yet to be scrapped. The Bird of Happiness appears to be the latest addition to this blossoming cult, as well as a tribute from a loving son to a revered father.

Berdymukhamedov uses the novel to tell the story of how his father at age nine assumed responsibility for his family while his own father (and Berdymukhamedov’s grandfather), was fighting in the Soviet Red Army during World War II. The dictator-author regards his father’s youth as an outstanding demonstration of phenomenal moral character according to the Turkmen news agency, which also carried the following breathless review:

“Events the Turkmen president’s father lived through during those years of hardship and his enormous achievements and selflessness are examples of great heroism. Tales of early maturation, unselfish love for the motherland and people, hard work, high spirituality, national traditions and customs, moral and ethical values of the Turkmen people […] became for the head of the Turkmen state, Gurbanguly Berdymukhamedov, a school of courage and maturity,”

Read that excerpt closely however and it is clear that the author — no doubt wisely given that he or she lives in a highly repressive police state — favors a descriptive approach to literary criticism, and so whether or not the book is actually any good or not remains unclear.

Of course, that Berdymukhamedov has written many books is not in itself unusual. Many if not most dictators throughout history have been inveterate scribblers. Over 2,000 years ago Julius Caesar, who was assassinated because of his dictatorial tendencies, wrote a few classics that are still read today, while the many tyrannical rulers of the 20th century cranked out a seemingly infinite stream of huge and tedious volumes. Some of these have endured, even if they are not widely regarded as classics except in niche circles. Hitler’s Mein Kampf still sells well in certain markets, while Mao Tse-tung’s Little Red Book is the second best-selling book of all time according to this very site. However many lesser known figures such as Albania’s Enver Hoxha were also ultra-prolific authors of books, as was the late Kim Jong-il of North Korea who famously dabbled in film criticism.

Given that dictators almost always position themselves as the supreme wise men of their societies, while often dismissing the foundational sacred texts of Western and Eastern civilization as a load of old cobblers, it is not surprising that they feel compelled to write books to “prove” their genius and thus justify their absolute power. However while a few dictators have dabbled in poetry — Stalin, Mao, Turkmenbashi and Ho Chin Minh all wrote verse, for instance — it is very unusual for a dictator to write fiction, let alone a novel.

In fact, aside from Berdymukhamedov I can only think of two-and-a-half examples. The half is the late Colonel Gaddafi, who once published a book of short stories, but in fact they read like written versions of the stream of consciousness rants for which he was well-known, if not celebrated. Benito Mussolini knocked out a pot boiler entitled The Cardinal’s Mistress in 1909, but this was long before he assumed high office in Italy. The other is Saddam Hussein who wrote long, clumsy allegorical fables attacking the United States in the aftermath of the first Gulf War. One of these, Zabiba and the King was translated into English, and it is extremely dull, although it does feature a startling digression into interspecies sex.

None of those novels are any good, and it is unlikely they will be remembered even in their countries of origin as anything more than a footnote to accounts of highly unpleasant epochs. As for The Bird of Happiness, a similar fate is probably on the cards. The interesting thing however is that Berdymukhamedov may not be that bothered by the possibility; that perhaps he even expects it. Whereas Turkmenbashi wrote in the vein of Hitler, locating his own autobiography at the center of the nation’s historical destiny, the ex-dentist Berdymukhamedov rather modestly writes about his father instead. Indeed, as far as dictators with outsized personality cults go, he is a curiously bland, dull man, who was described by US diplomats in cables leaked by Wikileaks as “vain, suspicious, guarded, strict, very conservative,” a “micro-manager,” “a practised liar” and perhaps most damningly of all as “not a very bright guy.”

Being dull has its advantages, however. Since Berdymukhamedov is not very interesting, and may even know it, his regime receives practically no outside scrutiny. With a handful of exceptions – such as Jennifer Lopez’s recent visit to the country to wish the dictator a happy birthday, and an incident when he fell off a horse – barely any column inches anywhere are ever assigned to Berdymukhamedov. And thus his people must endure his prose alone, and when they ultimately forget it, as they surely will, they shall likewise commit that act of forgetting in isolation.