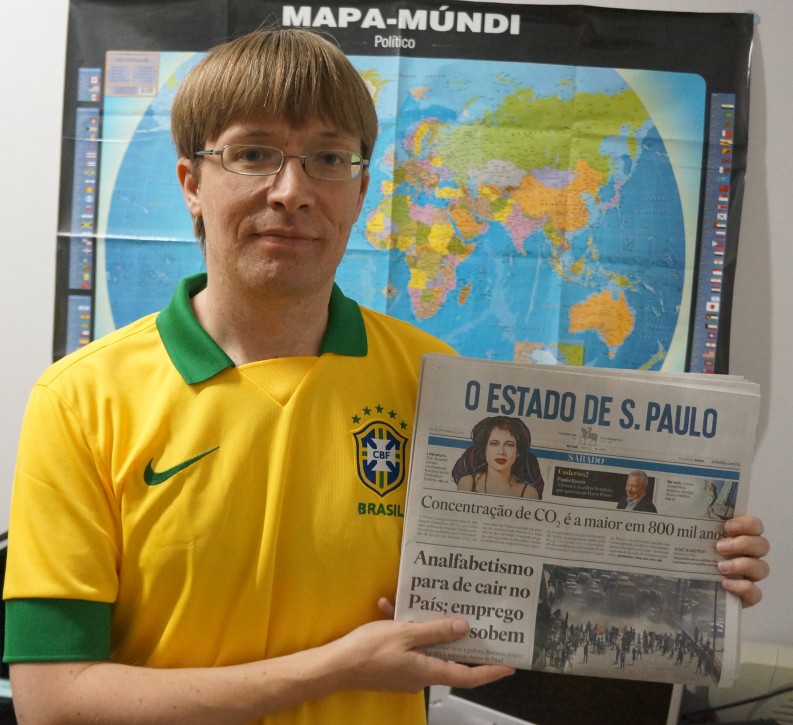 It was virtually impossible to predict how a fortuitous meeting between two PhD students who were neighbors in a London apartment building would come to mean so much to the Finnish and Brazilian book markets. Pasi Loman was a Finn studying History in the UK and his neighbor Lilia was a Brazilian girl getting her doctorate in literature. One thing led to another, probably involving asking for a cup of coffee, and, yes, it led to a romantic cliché: the cool Scandinavian guy married the hot Latin girl, and they moved to São Paulo, Brazil.

In the largest South American city, Pasi started to make a living as a translator and, four years ago, when he found himself translating Sofi Oksanen’s Purge from Finnish into Portuguese, he had the idea of establishing a literary agency specialized in Nordic literature. In short order the literary agency “Vikings of Brazil” was born, and the Lomans have now been successfully dedicated ever since to selling Scandinavian books into Brazil and vice versa, filling the gap between these two important markets. Here, Loman talks about Finnish literature, Brazilian books, and what publishers should look out for prior to Finland’s turn as Guest of Honor at the Frankfurt Book Fair in 2014.

Publishing Perspectives: What do you think are the areas and authors that foreign publishers should keep an eye on in Finland?

Pasi Lohman: Like in other Scandinavian countries, there are many absolutely brilliant crime authors in Finland, many of whom have already found an international audience too. As examples, one could mention Leena Lehtolainen, Pekka Hiltunen, Matti Rönkä and Matti Joensuu. Of the crime authors yet to make an international breakthrough that I would like to highlight Reijo Mäki, whose 23 books and eight films with the same character, Vares, are absolutely huge in Finland and should appeal to fans of Nordic Noir anywhere. Finns are also very good at historical fiction, like Sofi Oksanen’s huge success has shown. Finally, I would also like to draw attention to Finnish children’s and YA authors, for they are absolutely world-class, from Tove Jansson’s “Moomin” series to modern authors like Mauri Kunnas, Siri Kolu and Seita Parkkola, who won the prestigious Pépites award in France for the Best YA Novel of the Year in 2012. And speaking of children, given that Finland has reportedly the best education system in the world, foreign publishers would do well in looking into Finnish school books, even if some adaptation would be necessary to fit the material into their respective national curriculums. Finn Pasi Loman is proud to be a Brazilian.

What about Brazilian books and literature? What do you think are the areas that foreign publishers should keep an eye on in Brazil?

I continue to be amazed at the high quality of Brazilian children’s literature. There is a great depth of talented authors and such a rich variety of different styles of illustrations. Every home everywhere in the world should, for example, have Ziraldo’s Flicts, a true classic and one of my 4-year old daughter’s favorites. Then there are other classics like Lygia Bojunga and Ana Maria Machado. But foreign publishers should also really keep an eye on the younger authors like Ilan Brenman, Laura D. Macoriello and Toni Brandão, for example. Countries that are open for translated books for teenagers should check out two mega best-sellers, Paula Pimenta and Thalita Rebouças. For adults, in addition to Paulo Coelho, I would recommend foreign publishers to read Cristovão Tezza, Luis Ruffato and Bernardo Carvalho, all of whom were in Frankfurt this year.

What are your impressions about the Brazilian government’s Translation Grants Program? Do you recommend it to foreign publishers?

Absolutely. In the past there seemed to be suspicion whether these programs would last, but there is now a good long term plan and real determination to make it work. It can be a bit bureaucratic, as most things in Brazil, but it’s definitely worth it and in my understanding relatively easy to get. I know that the translation grant program has helped me to close deals in the Nordic countries and I expect this to have been the case with other agents too.

What about the Finnish translation programs?

FILI (Finnish Literature Abroad) is doing an excellent job in this regard. The process is simple, you do everything online, and most applications are accepted. What I find great about FILI’s translation grant program is that they support all kinds of literature, including more commercial genres like crime fiction, which is not always the case. Moreover, FILI gives grants to cover a part of the production costs of illustrated children’s books and comics, which is fantastic as often it’s not the translation that is a cost issue in these kinds of books, so the production grants really help.

How did Vikings of Brazil launch? Has this niche of trading between Brazil and the Nordic countries been a success?

Kind of by accident. A couple of years ago I got an opportunity revise and then translate two books by the great Sofi Oksanen for Brazil’s biggest publisher Record. After finishing the work, I wanted to do more translations, but I quickly realized that unless I start selling rights for Finnish books, I would be waiting a very long time for the next translation job, as so very few Finnish books had ever been sold to and published in Brazil. After some quick research on the situation with authors from the other Nordic countries, it became obvious that there was great potential and a niche that no one had exploited yet, so I opened my agency Vikings of Brazil, even though I had no experience whatsoever in the publishing industry. And we haven’t looked back since then. From Frankfurt 2011 to the end of this year I estimate that we will have sold rights for about 100 Nordic books to Brazil. Compare that to the fact that in 2009, the last year for which I’ve seen statistics, only 51 translated books were published in Brazil that were originally written in languages other than English, French, Spanish, German or Italian. As you can imagine, our success has surpassed even our own wildest dreams.

What are the toughest challenges to make the bridge between these two countries?

The biggest problem is not always having English translations available of the books, something which would make it easier for the publishers to analyze the work. Many, perhaps most, publishes are able to make decisions based on a sample translation, but others demand a full manuscript in a language that they can read. So unless a book has been already published in an English speaking country, the negotiations may sometimes end very quickly. Luckily this is not always the case, often a good sample translation is enough. The fact that Finnish publishers and agencies tend to invest more in sample translations than the Brazilians – and that more Finnish books have already been published in languages that the Brazilian can read than vice versa – has meant that it has so far been easier to sell Finnish books to Brazil than Brazilian books to Finland. But I think the Brazilians are catching up on this.

Finally, Brazil’s slogan for the Frankfurt Book Fair was “A Land Full of Voices.” Finland’s motto is “Cool.” What does this say to you?

Very different slogans, right? But I think both countries have chosen slogans that suit them well. Take Brazil for example, the country is such a wonderful mixture of cultures and the people like to talk a lot, so it’s certainly full of voices. And yes, I actually there is something there in the number of characters used, its visual symbolism! I think the Finns are much more efficient than the Brazilians. While the Brazilians are still talking, in their different voices, the Finns have already finished the job. And with their slogan, Finland has obviously been very efficient, wasting no characters. But having said that, Brazil and the Brazilians are also very “cool”!