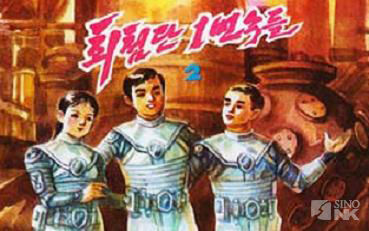 Writing for the academic journal Sino-NK, Benoit Berthelier examined the science fiction and fantasy output of Pyongyang in a piece entitled “From Pyongyang to Mars: Sci-fi, Genre, and Literary Value in North Korea.”

In it, Berthelier notes that while science fiction first emerged in North Korea in the mid 1950s with the translation of short stories by Soviet writers; it wasn’t really until the mid 1960s that North Korean authors, influenced not just by the Soviets but by early sci-fi writers such as H.G. Wells and Jules Verne published their own first stories (albeit infrequently), mostly in youth magazines.

But that all changed in October of 1988, when Kim Jong-Il called in a speech for the “development of science fiction on a larger scale,” and writers, quite naturally, responded to his call. Authors took him at his word, telling stories of space travel and immortality and exploration – subjects and settings that pushed for the first time well beyond the borders (both geographic and artistic) of North Korea.

It is interesting, to note, that while space operas and both utopian and dystopian themes are common in “Western” sci-fi, the North Korean version focuses on “the potential developments of applied science and technology.” Particular attention is paid both to the process of scientific development as well as the conditions that make such innovation possible. And, as Berthelier notes, perhaps unsurprisingly, “Family or love relations sacrificed for the pursuit of scientific truth are common clichés of both literature and film (such as in the 2007 movie The Schoolgirl’s Diary), just like the image of a worker spending nights after nights trying to improve his factory’s machinery. But in each case, while the actually process of research is mentioned it is hardly ever described. Science is not the object of the story but works more as a kind of plot device through which traditional matters such as family values or devotion to the country can be addressed.”

“From its early stages on, science-fiction had been a children’s genre, appearing in youth periodicals such as Adong Munhak (Children’s Literature); or in anthologies published by the children’s book publisher Keumseong Cheongnyeon Chulpansa (Keumseong Children’s Publishing House). The characteristics of the adult genre, however, started to evolve in the early 1990s as writers stepped beyond the realms of children’s literature. Adult sci-fi stories started to incorporate elements of mystery fiction (churi soseol) and become more plot-driven with suspense, twists and “whodunit” narratives. Most stories began with a startling event – a bomb planted on a plane (Lee Keum-cheol’s Change of Course), a high-ranking politician blackmailing the hero’s family (Eom Ho Sam’s Way Out), a mysterious flying object in space (Lee Cheol-man’s Explosive Report) – followed by a series of peripeteias involving spies, gangsters, imperialist conspiracies and scientific gadgetry. The international and exotic settings of these works give writers greater freedom in the depiction of criminality and violence, from murder to drug trafficking, sexual abuse, or cyber warfare. This in turn allows for a level of action as well as a variety of characters and villains (such as sea pirates or hackers) otherwise unheard of in the country’s literary tradition. But while all of this certainly makes for pleasant entertainment, the violence is never gratuitous: it stresses the cruelty of the enemies of the North Korean hero and its foreign allies in order to [emphasize] the broader political message delivered by each story.”

But where on the “literary food-chain” does the North Korean sci-fi writer sit? Berthelier says that the writer Tatiana Gabroussenko has written that while North Korean writers might not enjoy the same status as their former Soviet colleagues, there are still ways for them to be recognized and praised for their achievements, such as the type of publication in which the author’s works are published.

Even so, while recent science fiction works have received strong reviews and appeared in the major literary magazine Choseon Munhak, they still seem to lack the prestige of so-called “regular” fiction. For example, Berthelier points out that the yearly Chosun Arts and Literature Yearbook, which publishers a yearly list of the most “noteworthy works of fiction, has never singled a work of science-fiction, whether for adults or children, in its annual ranking.”

Why is this? The works that make it on the list tend to be either biographical depictions of North Korea’s leaders or stories of their accomplishments – literary prestige is in direct correlation with “the glorification of the leaders.” And, “as the North Korean definition of sci-fi makes it a necessarily futuristic genre, the historical themes that are crucial to institutional and political recognition remain out of its reach.”

To read this fascinating piece in its entirety, click here.