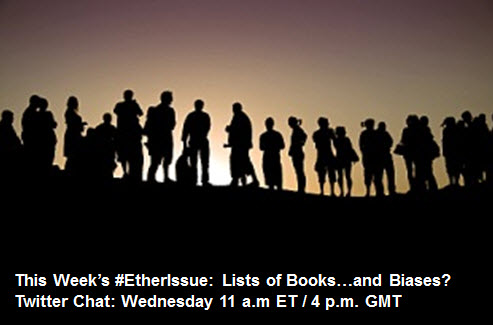 Read It Today. Debate It Tomorrow.

Welcome to the first edition of a new Ether-eal approach here at Publishing Perspectives. We hope to engage you in it and with it. And here’s how.

Please do feel free, as always, to leave comments for us at the column here, that won’t change. But we’d also like you to consider joining us for a frank and collegial real-time exchange each Wednesday, helping us to widen these Perspectives with your own.

We hope to tweet with you Wednesday. If you have any questions about this, please be in touch. We’re @PubPerspectives and @Porter_Anderson on Twitter.

The current (and yes, we still have the majority of December left) Kindle Top 100 for 2013 has 15 books by female, self-published or independent authors, and several more on the fringes — again, not counting the E.L. James novels on the list.

And Caitlin White at Bustle.com is updating us for the current year. As of Friday, the rankings at Amazon showed her these female authors on the Kindle Top 100:

Now, here’s our question, and we’re about to widen it for you with a few angles:

Could lists such as these Top 100 book rankings and the plethora of year-end book lists be revealing some important biases about gender in publishing?

Women writers are reaping the benefits of self publishing: http://t.co/lIkeUlWHNx

Many in the media were late to the news about self-publishing and the Kindle Top 100 for 2012, as is. A report in the Guardian from last week followed our own early October report here of this. It was in September at Writer’s Digest Conference West in Los Angeles that Amazon’s Jon Fine told us that in 2012, some 25% of the US Top 100 Kindle ebooks were self-published titles. We carried that news on the Ether in Do All Conference Roads Lead to Writers Now?.

We heard it again from Fine at the Frankfurt Book Fair’s CONTEC 2013 Conference, when he repeated it at a special town-hall session on the implications of self-publishing for traditional publishing.

And as White picked it up this week, she took the chance to examine the gender breakdown of authors represented in the current year’s self-published entries on the Kindle Top 100. As she points out, the technical accuracy of all this is in some flux. “Amazon’s definition of ‘indie,'” she writes, “is broad — essentially meaning not from the biggest publishing houses.” But she sees the news as “an indicator of change to come in the industry. And it seems that women writers are reaping the benefits.”

White, writing about self-publishing, or at least independent publishing in its widest context, may see something more positive than those looking at traditional publishing do.

Another look at lists this year has not been so cheering for some.

Readers concerned about the gender gap in @BuzzFeedBooks' best fantasy will appreciate the SF selection: http://t.co/IyubwlZ9iT

Whose Books of the Year?

Over the last two weekends in November I looked at diversity in contributors to the national press’ Books of the Year features. Contributors ranged from literary editors, authors and journalists to television and radio personalities. Some broadsheets had up to 45 contributors (the Observer) and some as few as seven (the Telegraph).

Stacey Bartlett is The Bookseller’s Media Editor and she followed up on the magazine’s work on diversity in UK publishing with Balanced reviews?

Of around 159 contributors to Books of the Year features in the Observer, the Sunday Times, the Guardian, the Financial Times, the Daily Mail and the Telegraph, roughly 56 were female, 103 male and approximately 11 contributors were BAME [black, Asian, ethnic minority].

Gender and race as represented in 'books of the year' reviews: http://t.co/gWCszDeXSo Nice one, @staceybartlett

Bartlett was following up on Tom Tivnan and Felicity Wood‘s piece, In Depth: Diversity in publishing. They wrote that the Bookseller’s 100 top trade influencers list for this year spots 39 women, 61 men. Bartlett adds: “The UK population as a whole has an almost 50/50 gender split—1.03 males to every female, to be exact—whilst 13% are BAMEs.”

Bartlett, moving from that assessment to look at Books of the Year, writes:

Although Books of the Year features don’t necessarily reflect the review pages across the rest of the year, the sections assigned to each gender painted a telling portrait. It would seem that male writers were more often than not tasked with selecting books for the ‘serious’ sections—such as economics, business, politics, history, music, sport and science—whereas women writers were almost exclusively in charge of food and gardening, with the additions of style, fiction, poetry and photography.

When it came to the actual books themselves, a similar lack of diversity prevailed. Of the 659 titles listed in newspapers, 36 of them were chosen at least three times (see below for the full list). Twenty-six of the 36 most-chosen titles of 2013 were written by male authors, and 10 by female authors. Mohsin Hamid’s How to Get Filthy Rich in Rising Asia was the only book written by a BAME author that made the top 36.

Shades of the VIDA Count

US book people will by now easily have spotted the parallels in Bartlett’s consideration of UK Books of the Year listings and the annual (since 2010) “VIDA Count” generated by the organization VIDA Women in Literary Arts. This assessment counts books by men and women reviewed by major publications, and it takes into account the genders of the reviewers, the journalists providing that coverage.

If you’ll go to this page, Three years: To Stump, and Stack — and Stem, you can scroll down past chart after chart of three-year comparisons (book reviewers’ genders and the genders of authors reviewed). What you realize in this dynamic scan of the charts is that change is not exactly rampaging through the comparative stats yet.

King does cite some change:

The Boston Review, with its slightly heavier load of male reviewers, has made a dramatic improvement proportionately of who they review since we began. Threepenny is taking a slow but steady approach with incremental yearly steps up from 29 to 34 to 36.5% women published respectively.  Poetry remains the most consistently equitable in its publishing practices, reaching a 45% height of women published in 2012: look to the poets!

And in some cases, King sees the media in question taking up the issue.

…have also begun to take it upon themselves to publicly account for their own numbers. Places like Harvard Review, Drunken Boat and Tin House are counting their authors each year. We do not think the significant jump in female authors reviewed at Tin House is temporary; they have bared the change in their attention and practices for the public record.

The Brit version of the VIDA count of women's literary presence is fascinating: http://t.co/dkdZKzHItJ

As with any attempt to quantify and evaluate on the basis of numbers, there have always been some qualms worth considering about the VIDA approach, most of which would probably be shared even by VIDA representatives.

For example, having worked in large newsrooms which receive between 25 and 100 or more books a day from publishers hoping for reviews, I’m aware that there’s an aspect to this problem that includes those publishers.

Is it the job of the newsrooms to pick up the phones, call the publishers’ press agents and ask, “Are you sending us a full or representative sample of your authors’ work, or could you be sending us more books by men than women?” It well may be the newsrooms’ jobs to ask this. But has that idea come to light yet in many instances of the process? Certainly, a news outlet can always request a specific book to review. But I can tell you, the avalanche of books coming in from the mail room each day is such that books editors and reviewers may not easily wonder if there’s something missing from that small hillside of books against the wall with their press releases fluttering from their dust covers.

Another question: Do we even know dependably how many books are traditionally published by men and how many by women each year? This information could be useful.

In the self-publishing arena referred to by White at Bustle, we’re pretty much out of luck: so many self-published books are moving without trackable ISBNs (a sensitive issue among authors) that as long as the major platforms such as Amazon decline to give us statistics on how many books are being self-produced and sold, we simply cannot say how many are written and published by women as opposed to men.

From 2009-2013, more than half of the National Book Critics Circle awards went to women http://t.co/7OVINNMJlK

In Are all-women lists patronising? Well, it depends… , Catherine Bennett at the Guardian reflects on the former Orange, now Baileys Women’s Prize for Fiction.

That program was established when “the big prizes were perceived as ‘intrinsically male.'”

The Costa, also up there in the premier prize league, has announced an all-women fiction shortlist for this year, a line-up that nobody seems to think is anything other than a literary statement. Rather, further evidence of unprejudiced prize-giving has turned attention back to the Orange/Baileys prize and its objective.

To get mildly blunt about it, if we are to rule out all-women’s awards programs, on the thinking that they’re as Bennett summarizes the criticism, “sexist, a ghetto and, in divisive focus on sexual identity, an almost absurd contradiction of fiction’s imaginative purpose,” then are we ready to insist that the “real world,” the wider industry and marketplace promote women, both as authors and as reviewers, as readily as it does men?

And if we’re ready to promote everyone equally, are we ready to insist on full reports—this means from publishers whose own numbers may not stack up the way they’d like—to give us a full accounting?

Short of voluntary disclosure, do we need an industry watchdog group of sorts to do the counting, as we see White at Bustle doing in terms of self-published authors on the Kindle Top 100 list? A small organized group can, in fact, track the traditional industry’s output. Self-published work will be largely invisible to us until all the platforms report (or all the authors use tracking identifiers), but traditionally published output can truly be counted and reported, simply using the houses’ annual catalogs.

And so, here we are: our #EtherIssue for Wednesday’s Twitter debate, and we want you to join in.

Shame on you, LRB: The Guardian runs a VIDA-style count on British reviews … http://t.co/KVjYc6ZS9g

Porter Anderson is a Fellow with the National Critics Institute, a 32-year journalist with several newspapers and three networks of CNN, as well as a producer posted to the Rome headquarters of the United Nations’ World Food Programme. This column, Ether for Authors, appears here at Publishing Perspectives on Tuesdays. Anderson’s Writing on the Ether is read on Thursdays at JaneFriedman.com, and he is a regular contributor to WriterUnboxed.com. He writes the Porter Anderson Meets column weekly for The Bookseller‘s Friday magazine in London with a live Twitter newsmaker interview on Mondays. More about him is at PorterAnderson.com. Find him at Google+