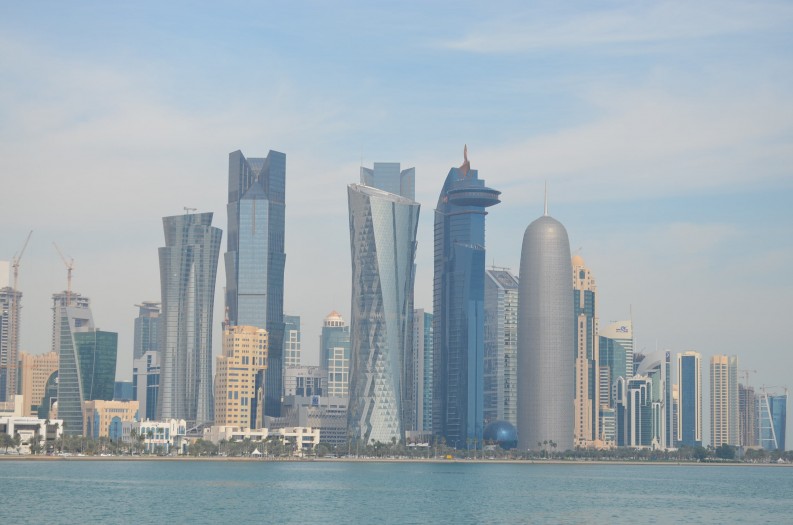 The Doha skyline may be straight out of the 21st century, but the practice of censorship is still firmly in the 20th.

DOHA: Say what you like about Gulf countries, they do know how to put up a good tower. Doha, the capital of Qatar, is a perfect example. It’s an architect’s paradise with each structure seemingly trying to outdo its neighbor — to be taller, or more angular, or more unusual, shinier, fatter, thinner, than the one that’s just been completed. This competition seems to extend right through the region, with Sharjah, Dubai, Abu Dhabi and Qatar each watching the other to see what its neighbor has produced: it’s as if one day there will be a giant ‘bling-off’ to work out who is the shiniest, fattest, thinnest, tallest, pointiest of them all.

In Doha, where the 24th Doha International Book Fair was held last week (and I was a guest) the effect is breathtaking and impressive. The Corniche area in downtown, looking out to sea, is memorable. Yet it also highlights some of the contradictions of this part of the world. These gleaming towers represent huge (literally) forward vision — a vision that extends to all manner of initiatives to boost reading among the young, and any number of digitization and archiving initiatives – but these ideas sit at odds with some of the other systems that are in place. Richard Peers-Weaver of WHSmith notes that the way censorship is conducted slows sales.

It’s not just the fact of censorship — it’s more the way the censorship works. Speak to any bookseller – and, sadly, there aren’t many in Doha – and they all tell you the same story. At the moment, retailers have to submit one copy of every title they receive to the Ministry of Culture for approval, even if the same book has already been approved for another retailer. It’s an Orwellian situation that is not without a comic side. “We’re still waiting for clearance for The Gruffalo even though it’s for sale elsewhere,” said Richard Peers-Weaver, Purchasing Manager of WHSmith, with a weary smile. “We have around 70% of our stock still tied up at the Ministry awaiting approval. It’s very frustrating, particularly when we have customers coming in and expecting to see certain things.”

Like other retailers, Smiths employs an Arabic speaking gofer as a liaison with the Ministry where, as with so much in the Gulf, expediting a service is all about building relationships. A good deal of self-censorship takes place, with buyers not even taking something in the first place because they know it won’t get through, and everyone recognizing the sensitivities in areas you would expect: sexual content, alcohol, blasphemy, gay material.

Booksellers seem perfectly understanding about this – indeed, they respect the views of the nation in which they are trading – but they are gritting their teeth at the camel’s pace slowness of the current checking system for titles. It also seems as if the Ministry of Culture itself is overrun with books, rather like a scene from one of those early William Boyd novels about hapless African states (which Qatar certainly isn’t). Put simply, the titles are coming in faster than they can be checked and it seems like they don’t have enough staff.

Which is why there was some good news just last week. Emma House, Director of Publisher Relations at the UK Publishers Association, who has been involved with the UK Guest of Honor scheme, met with the Minister of Culture, Dr Hamad Al Kawari, and raised the concerns over the approval process. Minister of Culture Dr. Hamad Al Kawari says they are looking for a technological solution to speed book clearances.

Speaking to Publishing Perspectives at the fair, Dr Al Kawari said: “We talked about it today and we have solved the problem. There will be no more checking more than once. We have to avoid the bureaucracy. I’m sure there is a technological solution. It will be easy.”

Of course, as ever with such things, there is a touch of ‘well, let’s see,’ or ‘inshallah’ (God willing) if you like. But at least some sounds have been made in a positive direction, and it does seem as if what is required is a web solution– somewhere booksellers could check whether a title had been given clearance, rather in the way the Booksellers Association in the UK used to list release dates of embargoed titles on its site.

It’s worth noting that, rather than seeming the faceless “man from the Ministry,” Dr Al Kawari is urbane and good-humored, certainly interested in books and keen to talk. He is currently reading Rumi’s Forty Rules of Love, Segolene Royale’s Cette belle idee du courage and a photographic study Sands of Arabia, which looks at the Gulf before the discovery of oil.

He has also had two books of his own published, one a collection of his newspaper articles and the other his dissertation on political science, a subject he studied at the State University of New York.

As for censorship, it seems it’s not as restrictive as the authorities might like. Ten minutes wandering the aisles at the fair and it was easy to find Nancy Friday’s My Secret Garden, her famous study of women’s sexual fantasies, and a novel called Tease by Immodest Blaize, the cover of which shouts: ‘Packed full of glamour, revenge and oodles of sex’.

It wouldn’t have got past the Ministry, but titles arriving for the book fair don’t have to submitted – just one of those little loopholes that can make a few days here so fascinating….