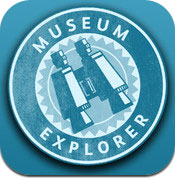 UK museums are adapting publishing technology to their needs and using mobile apps to re-invigorate the way visitors explore their spaces. LONDON: When I stepped through the doors of the Natural History Museum in London I seemed to have travelled almost as far back in time as the exhibits.

In this land that technology had forgotten there didn’t seem to be any public Wi-Fi  and instead I had to rely on 3G to open a website only whose homepage was optimized for mobile. When I wanted to know more about the exhibits it was easier to check Wikipedia about T-Rex than fight through the crowds to see the displays or struggle with a site which seemed more interested in telling me how to get to the museum rather than about the monsters I was seeing when I was there.

When I eventually found the museum’s café there I didn’t see a single tablet or laptop as its public Wi-Fi seemed to be a closely guarded secret. In fact the Wi-Fi was actually leaking from the Treasures gallery above and I was finally able to use an app designed by the museum to start argument with my young son about whether dinosaurs had actually turned into birds.

For mobile evangelist Mathew Petrie, this is an all-too-common mobile experience for visitors to museums in the UK – museums that have perhaps in the past been more worried about the Starbucks effect of “having people with laptops filling up their cafés” if they installed free Wi-Fi, rather than interested in what their visitor’s expect. Petrie is president and founder of Fusion Research and Analytics, which has for the last year being conducting research for some of the country’s best-known museums including the Natural History Museum into how their visitors use mobile.

“Lots of people in the museum community would now like to do a lot of things, but they need to cover basics first,” he says. “Museums have to understand audience needs before starting to build systems.”

According to Petrie, the Natural History Museum has already commissioned research to understand visitor mobile device ownership, usage expectations and current behaviors. “The Museum has also used this research as a platform to assess the potential for new mobile application development for content engagement and other on-site activities.”

Petrie’s research for the UK museum sector suggests that three quarters of UK museum visitors now come equipped with mobile and tablets, “but very few museums engage with them.” Only about 13% of museums have Wi-Fi, and of those that do, “most don’t even promote it.”

Mobile, though, is more than just QR codes that “few people use” or providing free Wi-Fi (although that is a good place to begin). It is more than just publishing a couple of apps that soon languish forgotten and un-updated in the app stores or the “souvenir app” for big exhibitions.

Getting Visitors to Explore the Museum in New Ways

Getting mobile is about understanding what visitors want before they visit, whether they are there from close to home or far away. It is about how what they want may differ between smartphone and tablet users and Apple and Android, as well as between young and old. It is about getting visitors to explore the museums in new ways and even to play games where security guards used to shout “No running.”

“People want to search, to effortlessly get more information more quickly, but 50% of visitors are from outside of the UK and they turn off data roaming to save money,” Petrie says. Tablet users tend to want a deeper experience of their visit but not necessarily in front of the exhibit. “Like anything to do with technology, museums are quick to want to follow it, but adapting it to the museum space is another thing.”

Too often, she thinks, “responsibility for ‘mobile’ can often sit across teams – marketing, technical development, digital – making collective decision-making a challenge and impacting on the museum’s responsiveness.”

Then research can easily be siloed so that “the intelligence that does exist, in large institutions can often become ‘stuck’ within departments.”

The result of this is a lack of understanding of the whole customer journey, with mobile becoming a “one size fits all” approach and a “fixation with apps” based on little more than “the fact that other museums and galleries are creating them.” When in fact, Greig argues, a website optimized for mobile would be much more cost-effective to produce.

Yet Petrie cautions that “museums are probably doing what they should be doing, being cautious and protecting their brand to avoid alienating people.”

Mid-size museums “may have a few people with the skills and the dreams but not necessarily the authority to go do it.” So better research can provide “more ammunition” for these people to get “more resources. If you have the skills you can have big impact.”

The Huntzz app allows museum-goers to create their own treasure hunts and tours.

Mobile to Play a Big Part in Future

Mathew Cock, head of Web for the British Museum, agrees with Petrie and Greig that “an increasing proportion of visitors to the museum do want to look at the museums on mobiles.” The museum will soon be publishing its digital strategy, in which “mobile is expected to play a big part.”

“We do have a very high proportion of visitors from abroad – and they have to rely on 3G as we have don’t have public Wi-Fi.” As with many Victorian museums, Wi-Fi is difficult “due to the old and huge buildings and the many galleries.” It is “something that will hopefully happen in the next three to four years.”

Within their website they are starting to do more things aimed at mobile, but beyond the home page most of the site is not designed for the mobile visitor. “In the future there are a couple of gallery projects that we might make apps for or have content designed for visitors and which might have Wi-Fi.”

At the moment the Pompei app is “still our main project,” designed by an outside agency owing to a tight timescale. The app is tied in with the museum’s 2013 blockbuster exhibition “Life and death in Pompeii and Herculaneum” and its Pompei Live film that was broadcast live to 250 cinemas in the UK in June almost like a “private view” and shown round the world in a recorded form.

“Apps are very difficult to keep relevant and maintain sales, so you need a presence for them outside the app story. So there are spikes in downloads when it is broadcast.”

“We have learned a lot from it as a trial for future exhibitions.” The tablet version was much more popular than the phone version – despite the phone app being cheaper. The tablet app is content-rich and the phone more useful than educational.

“It’s not a yes or no answer,” says Hugh Wallace, head of digital media, National Museums Scotland, to the question as to whether UK museums have been slow to adapt to digital.

“I saw some of the early inventive apps, and museums were actually quite ahead of the game compared to some of the big brands. However, while there are now a lot of inventive conversations happening, organizations themselves are not necessarily at the forefront of innovation.”

As in other sectors, “there has been a tendency for shiny things rather than things that add value to visitors’ experience,” he admits. “However, there is an openness, honesty and reality-checking that you probably wouldn’t find elsewhere.”

Funds are partially an issue: “Bigger players have opportunities to test and learn more than smaller institutions who may depend on one make-or-break project a year. They also have more funding from commercial organizations who are happy to get good PR.”

Wallace believes that a “better Web presence” is the best option for many museums as “apps can be an expensive one-off” and “relatively few apps have performed at the superstar level to make it a viable proposition.”

“Capture the Castle has prototype funding. It is a fast and furious team game with each team trying to capture flags to capture different territories in the museum.”

In the future Wallace believes mobile for museums will be about “location technology, gesture-based interfaces and 3D interfaces.”

“For the first time I am seeing nice bits and pieces of affordable tech that could change my world: some augmented reality that doesn’t for once look like a PR stunt.”

Ultimately, despite the temptations, he believes that that “the museum community has to be led from the experience perspective and not because the technology is there. Museums are good at overloading due to the way interfaces have been designed.”

For Mathew Cock only a handful of national museums that have a development team will be able to do this in-house. “The app space is fast-moving so there is a risk taking it on by yourself.” Virtual technology is likely to be the future but, again, “the cost could be high.”

Third party apps like Huntzz now allow museums and visitors to create their own treasure hunts and tours.

Diane Greig argues that “More data analysts are needed in the sector to turn raw data into actionable intelligence.”

So perhaps Mathew Petrie’s dreams aren’t too far-fetched: “If in a few years’ time you could say that one in four of visitors are using Wi-Fi then that would be huge.”