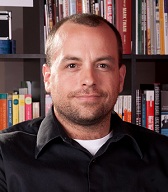 Is it appropriate to include an author’s twitter handle when tweeting a review of said author’s book? On a recent morning I suited up in my tweed writer’s jacket and went straight to Twitter to catch up on my feeds. Wading through the “Top 5” thisses and the “THIS!” thats, I caught a tweet from a book critic that went something like, “Here’s my review of [author’s Twitter handle] [laudatory adjective] [book title]: [link].”

(Here’s a quick primer on “@ replies,” should you need more.)

This tweet made me feel all wrong inside. (As does using the word “tweet” this often.) It struck me as akin to calling an author on the phone and saying, “Hi, I reviewed your book!” and then hanging up. Which is how I phrased it to a friend later that day, who replied with, “And what would be wrong with that?”

I wished I had more of an answer than, “I don’t know … but something.”

It’s never even occurred to me to cc the author when tweeting links to my own reviews, so in an effort to learn more about the motives behind it—and ideally to learn more about why it bothers me—I decided to seek input from a handful of book critics active on Twitter. Some are OK with the practice and others are not. All of them were gracious with their time, and if I were being paid by the word, or if we didn’t live in a tl;dr culture, I’d run their responses in full.

Instead, here are some highlights:

I’m sure that at some point I’ve included an author’s Twitter handle when I’ve pushed out a link to a review, but as a general rule I avoid it, and my reflex is to say it’s bad form; I’d tell a young critic not to do it. I think it risks making the reviewer look either chummy with the subject or presumptuous about how much the author might care, since the tweet will wind up in his or her mentions column. (“Yoo-hoo! Margaret Atwood! I’m talking about yoooooou!”) My reflex when I see a tweet like that is that the review is inevitably a rave, and probably a shallow or not-very-nuanced one.

I do think that perception matters in this business, and that certain actions can affect perception.

I don’t see anything especially malicious or impolitic about tweeting an author’s handle like that, especially if the review is positive.  In most cases, even if the review is critical, it serves as a valuable reference for anyone desiring to track multiple opinions. You also have to remember that the majority of writing about books these days is positive, which is why any critical essay I have to offer is generally confused as the work of a vicious devil sentencing someone to eternal damnation. But if something is genuinely marvelous, I don’t see anything wrong in announcing it on social media or tagging the authors.

Books culture is already such an egregiously small part of our landscape that it’s difficult to split hairs over typography or praise.

I don’t tweet the people I’m reviewing. I find that… a bit awkward. If they want to read reviews of their work, they’ll find them on their own. I’m not really sure why a reviewer would do that but people have their reasons. Perhaps, they are doing it out of openness or they simply want the writer to see that, as you put it, “Hey, I reviewed your book.”

Reaching out to authors on Twitter involves ethical issues, especially for journalists. The basic rule of ethics in journalism is: Never review a book by a friend or an enemy (although, as many critics have noted, you don’t know who your enemies are until you review their books). And sending a link to an author can contaminate the relationship if your tweet leads to an online “friendship.” Admittedly there’s an ethical gray area here: What, exactly, is an online “friendship”? But if you’re a journalist, you’ll never go wrong by keeping some distance between yourself and authors whose books you review. So I rarely, if ever, tweet links to them.

I often @ other people when I mention them or their work positively because the people who follow me may be interested in seeing more of their work or learning more about them. To me it is a form of reference—if I’m mentioning someone on Twitter, where better for people who read my tweets, and so are already Twitter-conversant, to learn about the person or his or her work than from his or her Twitter feed?

I’m not strongly against reviewer/author interaction on Twitter, but it’s not really for me. It does feel gauche to tag an author and say, “Hey, I reviewed your book.” The author will likely see it in any case. They understandably obsess over these things. To put it right in front of them seems to signal one of two things: a) I loved your book and want to be publicly congratulated for that; or b) I didn’t care for your book and am bold enough to let you know it here on Twitter.

There’s some parasitism built into literary criticism, as we sit for a few days or weeks in judgment of work that often took years to assemble. Better to let the review find its own way and not sound the horn too loudly to signal its arrival.

(For more on Jacob Silverman’s Twitter-related thoughts, read (or probably reread) his Slate piece “Against Enthusiasm.”)

I received other responses in public forums, including Twitter itself, and I think it would be helpful to look at (and then dispute) the four most common reasons I was given for why it’s OK to tweet a review at an author.

1) “I’m helping my followers find the author on Twitter.”

Or you can trust that your followers are capable of finding an author on Twitter within seconds, if they so desire, by using any one of Twitter’s several, and simple, search functions, or Google.

Even if supporting the author’s work were a book reviewer’s job (it isn’t), tweeting the link at the author makes your review no more supportive. It’s fine to be a cheerleader for a book. It’s lovely, in fact. But there’s a reason cheerleaders rah rah at the crowd rather than at the players on the field.

3) “I’m bringing my review to the author’s attention.”

4) “If the author retweets my link, his/her fans/followers will also see my review and maybe read it/share it. i.e., it gets more eyes on my work.”

Look, I like eyes on my work as much as the next writer does. It’s not a sin. And sure, if the author retweets my review, it’s likely that more people will read it.

There is no right or wrong here. Reviewers who tweet a review at an author are not evil. I do find myself questioning their motives (use your imagination), but perhaps that says as much about me as it does about them.

I can’t even promise that I’ve never tweeted a review at an author. (I know some malcontent out there will soon be scrambling through my feed to find an example.) But the mere idea that I may have done this in the past makes me feel … icky. And seeing others do it makes me feel equally icky.

I’ve never written a book, but if I did, and someone tweeted at me that he/she reviewed it, I’d feel obligated to respond. Cornered, really, by what might strike me as an aggressive, in-my-face tactic. Ignore the tweet and I come off as aloof. And if I have a book out, do I want to be known as aloof? Respond to the tweet, even with a simple “Thank you,” or making the tweet a “favorite” (the smallest form of acknowledgment possible, on Twitter or off), would make me feel far too cozy, in a public forum, with the reviewer.

I’m not against general coziness on Twitter. My day’s highlights often include amusing, interesting back-and-forths with my Twitter followers. But writers are already provided plenty of chances to be cozy. Anyone who’s attended schmoozefests like AWP or BEA, or even a reading at a local bookstore, knows this. Like these events, Twitter puts many of us in the same room at once. Unlike these events, on Twitter all of our conversations are recorded and made available to the public.

We need to draw the coziness line somewhere, and this is as good a place to start as any. Like Athitakis said, perception matters in book reviewing. Let us at least uphold the perception that we’re not part of a tiny, borderline incestuous community.

David Duhr is the books editor of the Texas Observer. You can find his own Twitter faux pas (plural) here.