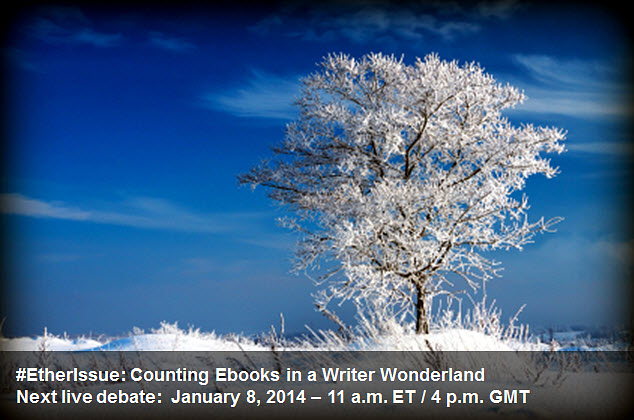 Walkin’ in a Writer Wonderland

There’s no danger I’ll make you drop that eggnog when I tell you that there are some contradictory elements in the stance of the overall self-publishing writing community.

But when we held our weekly Publishing Perspectives #EtherIssue live discussion Wednesday, an especially vivid one opened up—and somewhat by surprise.

The figgy pudding of ebooks versus print. But is it even versus? @Porter_Anderson will carve: http://t.co/jRvbK7YICd #publishing #EtherIssue

Quick note: #EtherIssue is on holiday hiatus now, but we’ll return to our regular schedule with Issues on the Ether on Tuesday, January 7, and our weekly #EtherIssue live Twitter discussion on the topic on Wednesday, January 8, at 11 a.m. ET / 4 p.m. GMT.

This week’s “live uproar,” as I’ve called it in subsequent tweets, you’ll remember, was anchored by the column, Issue on the Ether: Take this Ebook and Shove It.

In it, we went over some of the reactions to the American Association of Publishers’ (AAP) recent numbers (based on the input of some 1,200 publishers), indicating that, as Michael Cader wrote at Publishers Lunch, “ebook sales

I’ve emphasized the phrase because it encapsulates one of the key issues that has dogged the industry’s debate about the supposed “flattening” of the ebook market: the only organized, extensively reported figures we have come from the AAP and its “established trade publishers.” This is the only sector in the industry that right now reports visible figures.

And the best clue to what ensued when we took this to Twitter is to show you the comment that the highly regarded self-publishing author David Gaughran left on the column:

Jeez, I don’t know how many times I have to say this but: the AAP numbers only measure reporting publishers. They do not measure self-publishers, who are grabbing a larger and larger share of the market. In other words, the pie is a lot large than publishers think, because they are only measuring some of it.

Gaughran is right. While the AAP numbers are fine as far as they go, they don’t measure self-publishing’s ebook output; and, perforce, they’re US numbers only, not taking into account the international picture. They also cannot see the numbers held as trade secrets by our major retailers including Amazon and Barnes and Noble. As proprietary information, those figures are invisible to the rest of us.

Gaughran is hardly alone in saying that it’s illogical to declare a “flattening” of ebook sales trends when the only numbers we can see are so limited.

. @eoinpurcell @Porter_Anderson @brianoleary #etherissue look at it another way,if AMZN was seeing a plateau wouldn't they change strategies

A Contradiction in Interests?

But the contradiction? Well, as Gaughran joined our debate, he suggested that our inability to get accurate self-publishing may, in fact, be fine with some in that community.

And what developed over the course of the discussion was an intriguing picture of a self-publishing community which in part, like Gaughran, objects when its activity isn’t factored into reports (as in the “flattening” ebook market perspective many of them disagree with) but also may be in no mood to help with standard means of gathering better data.

A blunt way to put it: many self-publishers may wish their community’s growing clout was quantified accurately, but they don’t want to assist in making that happen. And some of them say their not even interested in getting a better, more comprehensive view.

Nor is everyone in the author camp even sure a slowing rate of growth in ebook sales is anything to be surprised at:

@Porter_Anderson Always natural after innovative disruption and early adoption for there to be rate slowing. #EtherIssue @pubperspectives

And what quickly developed in our online discussion was a sharp picture of how resistant many self-publishing authors are to the idea of—for lack of a better term—helping the industry get a broader picture with the use of trackable “identifiers” on books.

We could see a substantial difference of views among authors participating in our discussion, too:

@CarolBuchananMT @Porter_Anderson @pubperspectives My books get found and bought every day without ISBNs.

Here’s the term not to say unless you have, as we did, about an hour to talk about it: ISBN.

Administered by Bowker in the United States–designated as that administrator by the International ISBN Agency–the ISBN is the world standard “identifier for tracking a book in the marketplace.

While publishers buy ISBNs at huge discounts in major batches for a small amount apiece (they may buy, say, 1,000 ISBNs at a time), entrepreneurial authors in the US and UK must buy their ISBNs, themselves. And they’re not cheap.

Recommended usage by Bowker is one ISBN per format — PDF, ePub, mobi, PDF, print, audiobook. And so the company’s pricing deliberately pushes buyers toward the $250 10-pack deal. In the UK, a single ISBN isn’t even on the bill, the lowest buy is that 10-pack.

So our situation is that we don’t have a way to track how many ebooks are out there in addition to those ebooks of the alleged “flattening trend” reported by AAP. But, we also seem to have little interest in authors’ adoption of the ISBN so their work can be tracked and counted in the picture we don’t have of how big the market is or how much self-published work is out there.

@miralsattar discovery matters to authors, and Google has said that ISBNs are a useful tool for them #etherissue

US and UK authors are reminded that in some countries, authors don’t have to pay for ISBNs, they’re covered by cultural subsidies.

And authors are reminding us that there may be “no there there” when we go looking for a “self-publishing community to measure, anyway:

Ready for Another Contradiction?

One of the high points of the discussion came when Bowker’s Laura Dawson pulled up a previously unreported characterization of the jump in 2012 ISBN usage by authors:

Think about it. Many authors are saying they don’t want to be counted, don’t care about the industry’s need for evaluation of ebooks’ prevalence in the market and sales trends. And yet there was a jump of 60-percent usage of them by authors from 2011 to 2012. Dawson says 2013 numbers are in the works now to update what we know for this year.

BiblioCrunch’s Miral Sattar assures authors who ask her that ISBNs are not required, either for ebooks or print.

And this debate is frequently dogged by assumptions that Bowker’s natural corporate profit motives may factor in how it’s handling the pricing of ISBNs.

Needless to say, we went into Wednesday’s debate with a lot of questions and emerged with what may be even more.

Especially if authors are finding they have as many differences of need, interest, and opinion as some are telling us they do, it becomes harder to get a majority reading on various angles.

#EtherIssue Sorry – is it just price that makes selfpubs avoid ISBNs? What about the credibility you get from being counted?

@byondpapr Credibility with who? The bank manager still cashes our… electronic transfers. #etherissue

For all the exasperation some of us may feel at our in ability to really know whether ebook sales are “flattening,” still growing, or sliding backward, what may be more important at the stage in which Wednesday’s debate took place are the points being projected in curious parallel:

Bowker is telling us that it sees, in Dawson’s words, “an increase, steadily, in self-publishing authors applying for ISBNs for their books.”

Authors, at least as represented around our coverage this week of the issue, are saying they don’t need ISBNs and don’t mind if they’re not counted in efforts to quantify publishing in genera and its ebooks in particular.

What may be worrying some is the implication that an author corps of such diversity might also be home to a lot of confusion.

Remember to join us for another live Twitter #EtherIssue debate on Wednesday, January 8, at 11 a.m. ET / 4 p.m. GMT.

Porter Anderson is a Fellow with the National Critics Institute, a 32-year journalist with several newspapers and three networks of CNN, as well as a producer posted to the Rome headquarters of the United Nations’ World Food Programme. This column, Ether for Authors, appears here at Publishing Perspectives on Tuesdays. Anderson’s Writing on the Ether is read on Thursdays at JaneFriedman.com, and he is a regular contributor to WriterUnboxed.com. He writes the Porter Anderson Meets column weekly for The Bookseller‘s Friday magazine in London with a live Twitter newsmaker interview on Mondays. More about him is at PorterAnderson.com. Find him at Google+