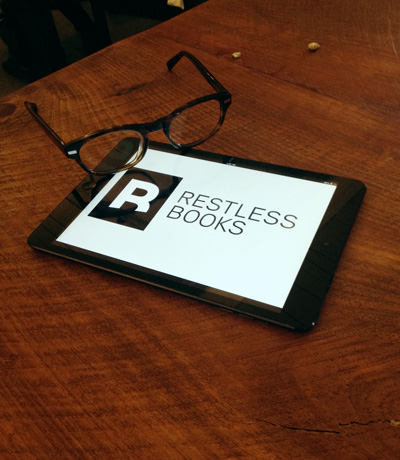 However you look at it, the publishing industry is in a state of flux and book sales are falling. So why would anyone jump into a sinking boat? Because a time of crisis is also an opportunity for change. More often than not, that change comes from the outside.

I’m an immigrant from Mexico. I moved to the United States because I admired its free spirit, its readiness for debate, its individualism disguised as philanthropic collectivism, and, perhaps more than anything, its open-market approach to invention. I didn’t become an American to give up.

This past year, I began as publisher of Restless Books, a small startup with big dreams. Our mission is to change the diet of American readers. Yes, we are comfortable with the word “reader,” but we are not comfortable with what corporate publishers put in front of us.

Politically, economically, and culturally, America is the most powerful country in the world—yet it might also be among the most parochial. America exports ideas and entertainment but hardly ever imports them. Evidence of this lies in the fact that only 3% of books published annually in the United States are translations. In Germany, Italy, France, and Spain, the numbers are dramatically higher: between 28% and 55%. Restless Books is convinced that many English-language readers are tired of getting such meager portions and starve for stories from far-away regions. Despite the often-homogenous selection offered by the Big Five, readers have diverse, often divergent tastes. That is why we are publishing a symphony of international voices to sate those readers hungry for a broader view of the globe. Although our audience is primarily in the English-speaking world, we bring to it literary fiction from Pakistan and Uzbekistan, science fiction from Poland and Cuba, and poetry from China. Many of these works appear in multilingual form.

We are also making an effort to compensate for gender disparities in the publishing world. Our series of women travel writers makes patent an under-acknowledged truth: that for centuries women have traversed the planet, leaving behind a stunning record of their odysseys.

These women are not the only ones traveling; troves of readers have migrated from print to digital. Conventional wisdom has it that digital books reach a narrower audience because they are not sold in bookstores. But bookstores are ceasing to be the space we go to for books. That space is on the Internet, where a large community of readers (or a hyper-motivated small band of devotees) is easier to build. Our hyper-technological culture now brings narratives to people in all shapes and forms. It does so relentlessly, I might say mercilessly. If the word “book” isn’t passé, then maybe the concept is. We are witnessing a dramatic change of reading habits. Though traditional books might be more marginal, people are reading more than ever: on our computers, on our phones, we live under a previously unimaginable deluge of words and opinions and information. This is a problem of abundance, not scarcity. What do we need to cut through the noise? Insightful, provocative reading about our convulsed and fragmented times. Ideas matter and ideas beautifully articulated matter even more. Good writing is also good thinking: to feel empathy toward someone who comes from a different environment is what human understanding is about. Writing is still the best way to reflect on those vital differences. Reaching across cultures, across languages is thus essential. Translation is a remedy against the ostracism, against the apathy America often projects toward the rest of the planet.

Obviously, books are no longer simply bound volumes of paper. They are at the same time much more and much less—much more as they expand and travel the world at light speed, much less as their linguistic range and traditional market narrows. Let’s do something to change this and bring the same exuberance to world literature that we are bringing to digital literature.

Ilan Stavans is publisher of Restless Books and Lewis-Sebring Professor in Latin American and Latino Culture at Amherst College. His latest books are All the Odes of Pablo Neruda (FSG), Golemito (New South) and Thirteen Ways of Looking at Latino Art (Duke).