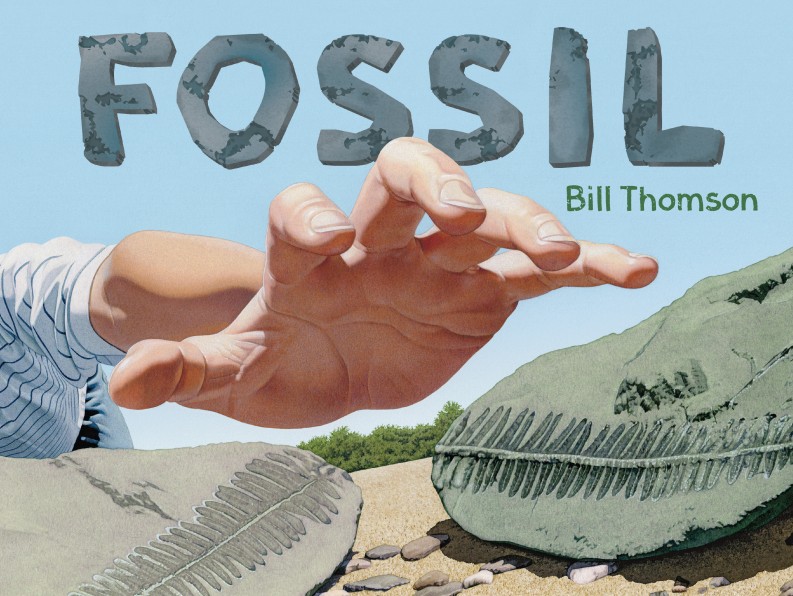 Bill Thomson has been called a “master at visual storytelling.” He is the illustrator of several children’s books, including Chalk (Two Lions/Amazon Children’s Publishing, 2010), and Fossil (Two Lions/Amazon Children’s Publishing, 2013). We recently had the chance to interview the author/illustrator to discuss his career and influences, and the challenges of telling a story without words.

PP: Who are the artists and which books influenced you? What did you grow up reading and enjoying?

Thomson: My favorite children’s book was The Giving Tree, and when I got a little older, I loved The Hardy Boys books. I got them for every holiday and especially loved the beautiful cover illustrations. However, comic books had the greatest influence and impact on my childhood. My favorite comics were the Hulk, Spider-Man, and the Fantastic Four, and my favorite comic artists were a pair of brothers, Sal and John Buscema. I can honestly say that the Buscema brothers are the primary reason that I became an illustrator. By copying their artwork throughout my childhood, I developed a love for drawing. While I could never draw as well as they did, I never stopped trying and constantly improved. Comic books began my life-long love of art and visual storytelling. When I got older, my favorite artists were Norman Rockwell, Franklin Booth, Maxfield Parrish, J.C. Leyendecker, and my former teacher, Murray Tinkelman. All blend great narrative skills with beautiful artistic technique. My list of favorite artists has continued to grow, and I probably have around a thousand books in my studio.

Tell us, if you would, a little about your career so far. My illustration career began when I was sixteen and regularly drew editorial cartoons for a local newspaper. I did a cartoon each week and that experience led me to study illustration at Syracuse University. However, my father didn’t want me to be a “starving artist” and feared this wasn’t the best career choice. To put his mind at ease, I began showing my portfolio and got a lot of work from newspapers and advertising agencies during the summer. By the time I graduated, I had an established clientele in Connecticut and later obtained artists’ representatives in Boston, New York, and Chicago. For the next fifteen years, I created illustrations for clients all over the country. Because illustration was my only source of income, I primarily focused on advertising work because it paid best. Having the flexibility of a freelance schedule and being a high school and college athlete, I also coached track and cross-country at a local high school. Initially, I was asked to replace a retiring coach for a year, but I absolutely loved it and coached for fifteen years. Helping young people learn to set and achieve goals brought me tremendous personal satisfaction, so I decided to explore teaching. In 2000, I was hired for a faculty position at the Hartford Art School, and the first time in my life, my artwork wasn’t my primary source of income. I always wanted to illustrate children’s books and revisit to my storytelling artistic roots, and teaching provided the freedom to follow that dream. It took three years to get my first book contract, but it was well worth the wait. I absolutely love and cherish the opportunity to create children’s books!

Pulling off a wordless book is difficult — why is that the direction you’ve gone? What’s the biggest challenge and what do you most enjoy about it?

I have been communicating with art throughout my illustration career, so wordless books are a lot of fun for me. In creating a wordless book, the most important thing is presenting a clear story without the support of words. Wordless books require viewer participation and the reader essentially functions as the author. I provide visual stimulus to engage children’s imagination so they can interpret a visual story. These stories can change with every reading. To offer the possibility of story variations, I also try to include layers of possible meaning so readers can see what they want. This allows the reader to choose what aspects are significant in constructing their story. For example, one child may see Fossil as a book about rocks that come to life. A second child may perceive Fossil as a love story about a boy and his dog with each overcoming fear to save their friend. A more advanced child may even view the Dragonfly and Pteranodon characters as metaphors for good and evil. The stories can be told as a descriptive account or from the point of view of different characters. Fossil can be told from the perspective of the boy or the dog, and even the secondary characters like the dragonfly offer more challenging possibilities for narration. Multiple readers can take turns providing narration, voices, or sound effects. Children can also hone inference or prediction skills by guessing what will happen on every turn of the page. What I enjoy most about my wordless books is hearing how creative parents and teachers use them with children.

While dinosaurs and reptiles are great fun to paint, my interest is actually more with imagination than dinosaurs. My first wordless book, Chalk, explored imagination and art, and I decided to follow it with two more books that would apply imagination to other elementary school subjects. Fossil merges imagination with science as the second installment of an imagination-based trilogy. When considering the catalysts for an adventure about fossils, I wanted to include a plant, an insect, and an animal so the book would have a variety of fossil subjects. I chose a Pteranodon for the animal role in Fossil because of its dramatic appearance and the flight aspect. In the story, the boy is initially terrified by the pteranodon, but overcomes his fear when his friend is in danger. While children run from the T-Rex in Chalk, the boy actually chases the creature he fears in Fossil to save his companion. With each new project, I try to expand on what I have before and try new things. I believe Fossil offers a more sophisticated story with more room for different interpretations.

I am currently working on the final installment of my imagination-based trilogy that should be published in 2015. I am extremely excited about this idea, but unfortunately, I can’t share the details of it at this time. After that book is completed, my next goal is to write a story with words. I always have a lot of ideas, but I am somewhat of an artistic slow poke. I really try to make my books special for children and make the stories seem completely believable; as a result, each one takes me a very long time to finish.