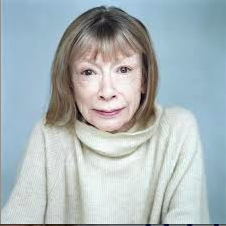 And now, according to The New York Times, Zola has found an “intriguing” way to attract consumers: by offering “a handful of previously unavailable digital works by one of the most beloved American authors, Joan Didion.”

The Times reports that starting next week, Zola Books will have the exclusive rights to sell an e-book edition of one of Didion’s best known works, the seminal essay collection Slouching Towards Bethlehem, which it will offer along with other non-fiction works, The White Album, After Henry and Miami, as well as her most famous novel, Play It as It Lays.

Zola also has the exclusive rights to sell e-book editions of several titles by Didion’s husband, John Gregory Dunne, including Crooning, Harp, Dutch Shea, Jr., and Quintana & Friends, which are being released in digital formats for the first time.

But just how big a deal is this? Writing in Bustle, Tara Wanda Merrigan sees it is being a big step for Zola:

This may seem like a little thing. Zola has, after all, claimed rights to just one Didion collection and some Dunne books. Zola’s actions are understandable: It is trying to create a niche for itself in an online retail market dominated by Amazon, a company that, despite its stable position at the top of the pile, innovates its offerings nonetheless to attract more customers. (The Kindle Matchbook program, launched last month, is a good example of this.) Other e-book providers like Scribd have taken a different tact, creating an online rental service that allows patrons to “take out” a number of books at a time. Our current moment is something like the Wild West era of e-book retail. Companies want to stake out their claim, make their acreage more attractive than the rest. But really, it’s anything goes in the e-book world.

Viewed in this light, Zola is doing just what it needs to survive, and with the added benefit of bringing a work, previously unavailable, to e-book edition. However, the collection it has claimed is an incredibly important one, a prominent member of the canon of American essays. The pieces in “Slouching Toward Bethlehem” fall in the tradition of New Journalism, a movement among journalists that was highly popular in the post-WWII era. Her perspective — she includes herself in her stories, and in fact, her interior responses to external events are the foundation of much of her reportage — was something of anomaly in the 1960s. There were others, like Tom Wolfe and Norman Mailer, using a similar technique, but “group journalism,” like that practiced by Time magazine (which employed her husband) was far more common. Didion’s Slouching was a crucial part of the effort to establish first-person journalism — a technique that today is so commonplace that it goes almost unnoticed. Think of how many times a feature article in the “New York Times Magazine” or “New York Magazine” or “The New Republic” or anywhere, really, includes a sentence like, “sitting in his office, I studied the art on the walls and books on his shelves.” Sentences like this are the products of Didion’s influence. This is an influence so colossal that when “The Paris Review,” known for its “Writers at Work” interviews with fiction writers, finally launched a nonfiction series, Joan Didion was its first subject.

Therefore retaining the sole e-book rights to such a preeminent work, though it be just one, is a big deal. This is akin to staking the best piece of land — the territory with the river, the fertile soil, and not too many hills…

In a press release, Joe Regal, CEO and co-founder of Zola Books said, “The works of Joan Didion and John Gregory Dunne are American treasures that readers will enjoy for decades to come. I am absolutely thrilled to offer the e-book versions exclusively on Zola Books. And I am pleased to offer readers a unique way to make e-books local by pledging a portion of the profits to a local bookstore.”