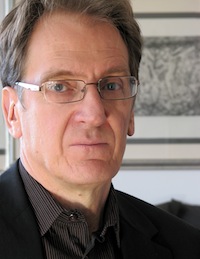 “During the apartheid era South African writers were focused to a large extent on politics and racism. Everything else was out-of-bounds,” says South African author Ivan Vladislavić in a phone interview with Publishing Perspectives. “Today, and in particularly, over the past ten years we’ve seen a much broader array of writers emerge — from crime to romance to science fiction. People are more free to explore and it’s a much richer reflection of our society.”

Coincidentally, Vladislavić’s comments resonated with today’s feature story — “Does Translated Fiction Too Often Cater to Cliché? — underscoring that it’s not just translations that are impacted by our preconceptions and the inherent limitations of being at a cultural remove from a place being described in literature.

A widely-respected and award-winning writer in his home country, Vladislavić has been described by André Brink as “one of the most imaginative minds at work in South African literature today.” He currently touring  the United States  to promote Double Negative, his first work of fiction to be broadly distributed in the US, which has just been released by & Other Stories press. The novel — originally published in 2010, accompanied photographs from acclaimed South African photographer David Goldblatt, and later republished as a stand alone text — tells the story of Neville Lister, an aimless college dropout in Johannesburg in the 1980s, who decides to accompany a photographer and a journalist who will pick three random houses to explore the stories within — and the aftermath of that adventure. Unsurprisingly, the story is told as a triptych — in South Africa, London and again in South Africa, where the Lister has returned after the fall of Apartheid. Or, as Lister says, once it “sat down.” Vladislavić, the author of four novels and several works of nonfiction, has long been obsessed with image making and had previously worked side-by-side with artists, producing among other works, A Labour of Moles (Sylph editions) and The Loss Library (Seagull Books), among others. He’s also written on Robert Walser and photography. His best known book outside South Africa, Portrait with Keys (published in the US by Norton), is itself a collection of Christopher Isherwood-like nonfiction vignettes, anecdotes and observations, describing day-to-day life in Johannesburg (circa 2006) and how it has changed.

Naturally, he has a strong opinion about how the image of South Africa is reflected abroad and back at him. “I don’t think what people come across abroad is fully representative of the country,” he says. “Naturally, when you come from a small and unimportant country like South Africa, this is going to happen. We have a few writers who have come to represent us on the world’s stage. That is natural. For a period in history the world was focused on us because of our abysmal politics. Now that that has changed and the focus has moved on.”

But that doesn’t mean South Africans have stopped writing about the issues that deeply affect their lives. Like Vladislavić in his work with artists, they have simultaneously absorbed and resisted their history, all in an effort present a contemporary image to the world through the books they write.

It might start with our making a bigger effort not to take the easy path and simply lump all African literature together. “That is the tendency,” agrees Vladislavić, “but it is an unfortunate one. My experiences and circumstances in which I live in Johannesburg are vastly different from someone in Lagos, for example. Each country is vastly different, as are the writers.”

What do they — and, consequently, we — have in common, then? Perhaps our shared humanity and our ability to reflect on the human condition. And finding that common connection might be the best we can do, given our geographic, historical, and cultural differences. That is, among other things, what literature strives to overcome. And it might even be enough.