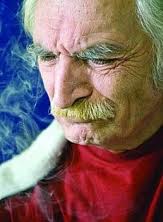 It might be the beginning of a miraculous holiday season. As was noted at The Literary Saloon, not only has a deal been reached in Geneva regarding Iran’s nuclear program, but it was also reported by the Tehran Times that the Iranian Ministry of Culture and Islamic Guidance is considering allowing the publication of a Persian edition of Mahmud Dowlatabadi’s best-known, critically acclaimed novel, The Colonel (Melville House), as announced by Deputy Culture Minister for Cultural Affairs Seyyed Abbas Salehi.

The Tehran-based publishing company Cheshmeh, a publisher of many of Dowlatabadi’s works, had submitted the book to the Ministry back in 2008 to apply for permission to publish. At that time, the ministry refused to authorize publication unless Dowlatabadi made changes to the book, known in Persian as “The Downfall of the Colonel,” but ultimately refused to approve the book even after it had been revised.

But in his recent statement, Deputy Minister Selehi said, “I’ve read the book; I read all the books written by Dowlatabadi since I was a young man. He is the pride of Iran’s literature and the Khorasan region, so the publication of his book in Iran would be an honor for the country.” The Tehran Times went on to say that at the same time Salehi “respects the regulations governing the publication of books in Iran and added the book should not be exempted from regulations.”

Earlier this month, The Colonel received the 2013 Jan Michalski Prize for Literature. The Iranian-born Dowlatabadi is also the author of Kalidar, Desert Strata, The Trip, The Legend of Baba Sobahan, among others.

Read more about Dowlatabadi and The Colonel here.