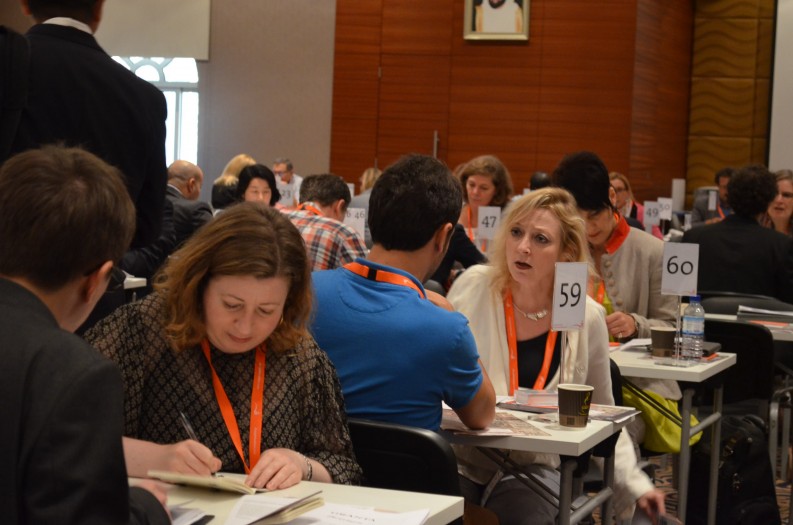 The “rights souk” at the Sharjah International Book Fair was bustling.

You could call it a “rights souk.” The Sharjah International Book Fair (SIBF), which runs until November 16, once again hosted its intellectual property bazaar last week, with international publishers and agents invited to attend timetabled matchmaking sessions amid the marble floors and Islamic arches of the grand Chamber of Commerce. Every now and then a cry would go out from one of the organizers, almost like a call to prayer, except that in this instance it’s a call to trade: “Mr Abdullah from Lebanon? Mr Abdullah from Lebanon?,” but if he can’t be found there is invariably someone else to take his slot.

In its friendly, bustling, slightly chaotic way, it’s a perfect example of what international book fairs should be about. As the UK’s Ruth Logan of children’s publisher Hot Key Books put it: “I’m seeing people here I wouldn’t see in London or Frankfurt. I’ve seen publishers from Syria, Lebanon and Egypt, as well as the UAE. There’s a lot of interest in books for younger readers. It reinforces what we all know publishing is about, which is relationships.”

Other UK publishers were similarly positive. Weidenfeld’s Alan Samson — like Logan, on his first visit to the fair — said a Syrian publisher had asked ‘What have you got that I can buy?’ “It’s been a while since anyone has said that. They had a translator with them too, who was extremely good. We’ve begun a conversation which is where it all starts.”

Similarly, Judith Curr from Atria/Simon & Schuster is also here on an exploratory, fact-finding mission, “getting to know the market, seeing how it works.” Cuneyt Dalgakiran of Turkey’s Timas publishing house says rights deals in the Arab world are being boosted by popularity of Turkish TV series in the region.

For Turks, Arab World is a Growing Rights Market

Not that it is all exploratory either — there is solid business being done. Listen to Cuneyt Dalgakiran from one of Turkey’s main houses, Timas. “This is our third Sharjah. Apart from Frankfurt, this is the most important fair for us — and I have been to 15 this year. Every year we sell more than 30 titles, particularly to houses like Arab Scientific Publications. They like historical novels about the Ottoman Empire. We have some Turkish TV series set in that time, based on novels, and those series are very popular in the Arab world. That has led to a boom in selling to Arab countries. I think Turkey wants to establish soft power in the region and is using culture to do that.”

His fair got off to a particularly good start when he sold a novel to the French publisher Galaade on his first day. “In fact, the negotiation began in Sharjah last year. Sharjah is also a great place for finishing things off.”

His Turkish colleague, agent Ayser Ali, was here on her second trip, also said she’d received interest in an historical novel set in the time of Suleiman, “from one publisher here and from a Georgian publisher.” Tahir Akhtar of Karachi is looking to set up a book sales operation in the UAE, which has a large population of workers from India and Pakistan.

With a large number of Asians living in the UAE, Indian and Pakistani publishers see much opportunity in the region. Tahir Akhtar of Karachi-based Children Publications, which has been exhibiting at SIBF for the last three years, was at the fair with a dual purpose. “We’re looking for someone to sell our Urdu and English titles here, and we’re also keen to buy rights to Arabic children’s books for us to publish in Urdu. In the past, we’ve used the fair to sell books, like in a bookshop [SIBF remains essentially a giant bookshop visited by families pushing supermarket-style trolleys], which gives us up to 15,000 UAE Dirhams [around $4,100]. We’re doing that this year too, but now we also want to find a sales operation, but someone we can trust.”

Elsewhere in the ‘souk,’ Gitanjali Chatterjee, Deputy Secretary of the Ministry of Culture, Government of India, also sees a lot of potential in the Asian expat market, particularly for Urdu and Malayalam titles. “There are many people who come to the UAE from Kerala to work as nurses. But we’re also hoping to sell Arabic rights at the fair too.” His Highness on walkabout (2)

Sharjah Looking to Compete on Culture

The emirate of Sharjah continues to position itself as the capital of culture in the UAE, with books and learning very much to the fore, driven by the commitment of its ruler, His Highness Dr Sheikh Sultan bin Mohamed Al Qasimi, for whom literacy and literature is a passion.  As if to underline this, a publishing term is even used for each successive SIBF, with Fair Director Ahmed Al Amri welcoming international publishers and agents to the “thirty-second ‘edition’ of the Sharjah International Book Fair”.

The next beneficiaries of His Highness’ support for books are likely to be the country’s libraries. The American Library Association (ALA) has signed a ‘memorandum of understanding’ with the SIBF to work with the fair next year and host a two-day professional program that will see librarians and related experts from the US come over to demonstrate best practice and share their knowledge. “We’re very excited about this,” said the ALA’s Director of International Relations, Michael Dowling, who was here with three colleagues. “Ahmed will come over from the fair for the ALA’s mid-winter meet and we’ll start working on the details. The government of Sharjah wants to increase the knowledge base of its libraries and we’re very happy to help.” Eric Huang of UK digital children’s book platform Made in Me says they are looking at the possibility of adding Arabic languages apps.

First-timers Sridhar Gowda and Geraldine Rose from the UK, whose Kadalu agency represents Indian writers unpublished in the West, concluded deals for nine Indian novels and poetry on their first day, to publishers in Georgia and Azerbaijan. Solid business kick-started by the Sheikh’s generosity, yes, because Gowda and Rose are among those brought over as guests of the fair, but surely the beginnings of long-standing relationships too that could lead to further business.

Another first-timer this year was Eric Huang, late of Penguin, now Development Director of London-based children’s media company Made in Me. “I’m here to buy,” he said. “We’re looking at the potential for Arab language apps, or at adding Arabic to our mebooks platform of downloadable titles. We’re exploring. We could open a separate shop for Arabic language titles, or sell Arabic books within mebooks. I’ve already met a publisher from Jordan who has some lovely picture books. I think in general, publishers should start thinking about their content away from the format. Publishers think the book is the end, but it’s just the beginning.”

After several years of aggressively courting overseas guests, the SIBF is setting itself up alongside Frankfurt and London and BEA and other key international book fairs as a key place where important discussions take place; it is now very much part of the global, book industry family, part of ‘the conversation’ that we hear so much about these days.

It’s also a place where one can be reminded of some of the more delightful and surprising projects that bring unlikely and unexpected collaborations to fruition. One such this year was a new app from Literature Across Frontiers, the ‘European platform for literary exchange, translation and policy’, based at the University of Aberystwyth in Wales. Called Gimbal — as in the frame that holds navigation devices — it is a short story app, currently for IOS but with Android coming, that helps the reader discover cities through fiction. “We’re using young and emerging writers and pairing up their cities,” explained Director Alexandra Buchler. “So we had a writer from Alexandria going to Barcelona and someone from there going to Alexandria. We did the same with Prague and Istanbul and Manchester and Zagreb, and others.”

The app takes you on a journey and helps you understand another city, other ways of thinking. Increasingly, the Sharjah International Book Fair does that too, as it brings together ever great numbers of professionals from around the publishing globe. As the BEA’s Director Steve Rosato put it: “They’ve got a proper trade show going on here.”