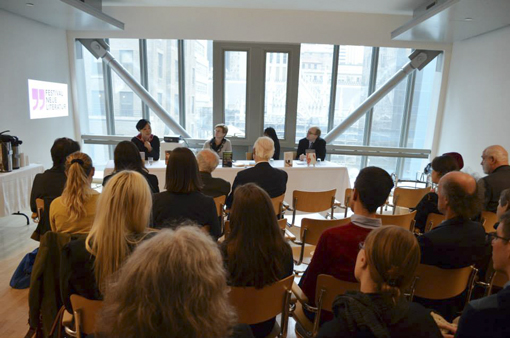 On Tuesday, November 12, 2013, the Austrian Cultural Forum hosted a press event to announce the winner of the 2014 Friedrich Ulfers Prize and to preview the 2014 Festival Neue Literatur — a 3-day event highlighting new writing from Austria, Germany, Switzerland and the US. Martin Rauchbauer, the Director of Deutsches Haus NYU, announced to the crowd of publishing professionals that Sara Bershtel, publisher at Metropolitan Books, will receive this year’s Friedrich Ulfers Prize. This annual $5,000 prize goes to a leading publisher, writer, critic, translator, or scholar who has championed the advancement of German-language literature in the United States.

Bershtel was chosen because she has introduced countless important German-language authors to the American public, in some cases even before they were known in the German-speaking world. Peter Schneider, Hans Magnus Enzensberger, Christoph Hein, as well Nobel laureate Herta Mueller have been made accessible to U.S. readers largely due to her efforts.

Last year, Carol Brown Janeway won the inaugural Frierich Ulfers prize for her work as a translator and senior executive at Knofp, bringing German-language books to the USA, including The Reader by Bernhard Schlink, Measuring the World and Fame by Daniel Kehlmann, and Perfume by Patrick Süskind.

The 2014 Friedrich Ulfers Prize will be awarded in February at a private reception prior to the start of the Festival Neue Literatur.

Also at the press event, Festival curator Tess Lewis introduced the line-up of authors who will participate in the program. This year’s featured authors are Milena Michiko Flašar and Maja Haderlap from Austria, Olga Grjasnowa and Abbas Khider from Germany, Melinda Nadj Abonji and Richard Weihe from Switzerland, and Keith Gessen and Monique Truong from the United States.

The Festival Neue Literatur is free and open to the public, and features four panel events over the course of the February 28–March 2 weekend.