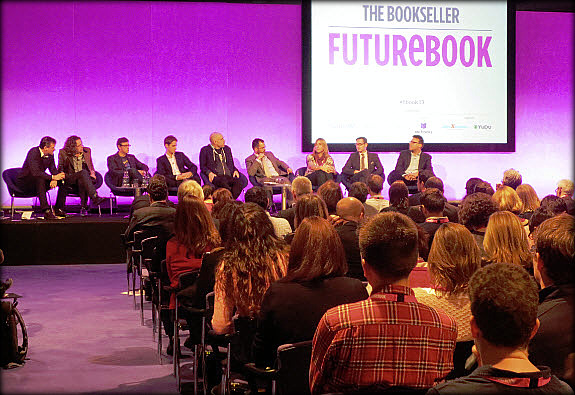 LONDON: In publishing these days, one person’s big idea is the next person’s belly laugh.

But “The Big Ideas Session” near the end of The Bookseller’s FutureBook conference in London last Thursday was intended to be the day’s most provocative event. (Of course, there were some other provocations, as covered yesterday by Roger Tagholm in Is Government the Only Force Able to End Amazon Dominance?)

In the trademark deep-pink glow of the FutureBook’s backdrop, the segment crackled with lightning glimpses of an industry still picking its way awkwardly, sometimes testily, across a treacherous digital landscape.

Faber & Faber’s Stephen Page energetically hosted a panel of eight industry figures, each of whom had a few minutes to pitch a “big idea” to the 600+ attendees at Queen Elizabeth II Centre, Westminster.

Calling the group into session, Page left no doubt that he hoped for something a bit more than a smooth ride, remarking: “To change, when you’re doing pretty well, is incredibly difficult. We must innovate in the core, in the core of our publishing.”

Adding that he’d like the session to offer particular challenges to publishing houses that still see ebooks as innovative, he said, “It’s nonsense to say publishing doesn’t innovate. Who here today will be who we talk about in 20 years?”

Taken as a group, Bhaskar said, “The trouble with myths like these is they have a tendency to hijack the conversation. It’s easy to have an opinion on publishing, and almost everyone does. There is still a great deal of confusion about what a publisher is meant to do in the 21st century.”

Echoing themes from his new book The Content Machine (Anthem Press), Bhaskar said, “It’s about what publishing really is. For me, it’s about filtering and amplifying content to add value…If your ability to select means something; if you can ensure work is encountered more than it otherwise would be; you are a publisher.

As if on cue, Rebecca Smart, CEO of the Osprey Group, was primed with an example of what many in and around publishing today flatly call crap. Rebecca Smart: Why Are We “So Bloody Slow?” Smart would become the session’s most-talked-about speaker and one of the entire day’s standouts. She was also, as many would note, the only woman among the session’s nine participants.

Eloquently exasperated, Smart threw an image of “the long publishing pipeline” up onto the stage’s magenta-framed screen and said: “I don’t know about you, but this is sometimes how it feels when I look ahead to the commitments we’ve made for new books. A full and long pipeline is often seen as a good thing but is it appropriate to our current commercial landscape?”

Displaying a list of rights deals announced in October in The Bookseller, Smart said, “The vast majority of books were for publication after October 2014, and a good number…were for spring, or even summer 2015.”

Smart spoke of talking to an author—”well-networked, high-profile…a digitally aware author who has several books published already with major trade imprints. He submitted his latest manuscript eight months ago and his book will not be published for another six months. He cannot understand this. His readers cannot understand this. They know he has written his book because he’s blogged and tweeted about it. They want it now. He’s dealing with their correspondence but not in a way that puts his publisher in a good light. He’s embarrassed and frustrated.”

Smart slashed and burned her way through the factors behind the industry’s glacial traditions:

To turn things around, to “just stop” being so slow, as Smart put it, she suggested working with an author to get a book to market “as soon as possible and promote it together—more of a partnership.” She also recommended “multiple pipelines with different speeds/lengths. Could we, for example, have a ‘bestsellers’ season that consists of only a few titles, then deal with everything else on a rolling monthly schedule?”

But, after she left the podium (to widespread applause), what likely  lingered in many minds is the candid picture she’d painted of one of publishing’s growing digital nightmares: debut authors may be understanding about the slow process to market and put up with it, said Smart, “but as they build reader communities around them they will get really, really pissed off and go and self-publish.”

In fact, it was an author who came forward with a “Big Idea” about an “e-reading ecosystem.” Jeff Norton: Industry Needs to Focus on Service to Consumers

Jeff Norton, author of the Metawars books from Hachette and the coming Memoirs of a Neurotic Zombie from Faber, noted that other industries have come up with “arms length” solutions to disruption on their own, such as what the airline business did when several airlines formed Orbitz.com in 1999 or American television stations did by establishing Hulu.

The big publishers, Norton said, should form “a new e-reading ecosystem” with a Web site, devices, and apps. It would then distribute its devices through independent bookshops on an affiliate revenue model. “Flow a percentage of ebook revenue generated from each consumer initially brought into the ecosystem from that bookseller back to that bookseller”—a revenue stream for every ebook purchased.

Norton’s concept depends on independent management of the consortium of services he envisions to avoid publisher collusion or its appearance. That “arm’s length” element is the key in that regard, he said.

Marcello Vena: Co-Publishing is the Key In co-publishing, Marcello Vena of the new Rizzoli Lab “You Crime” program— said “the publisher and author co-finance the work, the author through marketing efforts.”

Briefly, this is the program in which 12 Italian authors were chosen to produce stories for new noir collections in tandem with four established writers. The emerging writers would then compete through social media to garner the most “votes,” with the winner coming away with a contract to publish a book of their own with Rizzoli.

Speaking to Publishing Perspectives, Vena said, “This vibrant industry doesn’t lack imagination. This industry, though, still must prove itself capable of sustainably and regularly executing and delivering innovative success stories.”

Rizzoli’s plan is to try to expand the co-publishing model in 2014 beyond crime/mystery and see if it has legs in other genres. “My Big Idea,” said Jamie Byng, MD of Canongate, “is we’d be well-advised to publish fewer, better books.” Byng noted that Canongate’s output has fallen from 55 books per year a decade ago to roughly 40 per year today.

“The benefits of significantly reducing the number of books we publish are self-evident,” Byng said. “I think this is something that readers would appreciate, and it would lead them to read more.”

In all, he summarized his thinking in what became the most tweeted line of the day: “We should have fewer orgasms [in publishing] as long as we make them longer and better.”

Ideas and When To Have Them

Simon Trewin of William Morris Endeavour spoke about the need to bring hackathon-event tech energy into publishing. Peter Hudson of BitLit explained his startup’s concept for bundling ebooks with print titles to give bookstores a hand up into the digital arena. And Chris McCrudden of Midas proposed a rating system in self-publishing: “I’m talking about the badly written get-rich-quick-through-semi-legal-means books…’quick books.'”

And, as with almost everything in publishing, the Big Ideas session, itself, became a topic and target of debate.

“Shame so many of the Big Ideas are product plugs,” tweeted one.

“Enjoyed the final Big Ideas session at #fbook13, great to see we’re part of such a creative, innovative, and vibrant industry,” messaged another.

“Has anyone mentioned DRM in Big Ideas?…Or is that not big enough?”

“Only one woman in publishing with big ideas?” challenged another.

“But four trendy pairs of specs,” answered someone else.