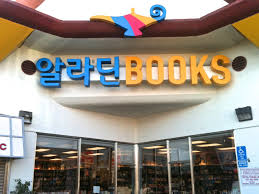 The website of Aladin used bookstores, a fast growing Korean chain, where publishers have been accused of dumping books to help boos sales.

“This is how members of the dead-tree industry would summarize the last couple of years as they cope with disappearing reading habits, manifested more clearly in the sluggish economy.”

One figure says it all. The Ministry of Culture, Sports, and Tourism says that of Korea’s 42,157 publishers, nearly 94% did not release a new book in 2012, at a time when Korea’s book consumption dropped to its lowest point in more than ten years.

Still, as Kim points out, there is one company in the book industry that is doing well. “Aladin, a book retailer with a large online presence, has been enjoying a booming business with its chain of used-book shops, which have been magnets for bargain-hunting readers.” The outpost of Aladin Bookstores in Los Angeles.

Taking full advantage of its large sales network, the company is able to present customers with a larger selection of books than the typical independent second-hand bookstore. Combine that with “the impeccable interior of its shops,” (complete with comfortable couches and computers), and you have a store that’s tailor made to reach “the generation of customers who grew accustomed to reading at Starbucks.” Indeed, since opening its first store in 2011, Aladin has expanded to 16 self-proclaimed used-book stores, including one in Los Angeles that opened in July of this year.

But success brings with it criticism. Kim writes that “Some industry sources say that Aladin’s stores are encouraging a destructive price competition among publishers as they attempt to move larger volumes of their new books.”

The article points out that some publishers are stockpiling large numbers of their latest releases at Aladin stores, where they sell at a 50% discount, “in an effort to inflate sales figures.”

Kim argues that this behavior, which he calls “reckless and myopic” is damaging to the long-term health of Korea’s publishing industry, “which may depend on whether a Germany-liked fixed-price system on books, currently discussed at the National Assembly, will ever be allowed to be effective.”

The proposed law that is currently under debate would prevent retailers from offering discounts of more than 10%. The problem, says Kim, is that “such regulations would be rendered irrelevant when the more desperate publishers can just move their books at cheaper-than-allowed prices through ‘loopholes’ like the Aladin shops.”

What exactly entails a “used” book is seemingly an open question when large numbers of new books, many still in their vinyl coverings, are found at Aladin’s used book stores.

One company, Dong-Asia Publishing, recently said that it would no longer sell its books through Aladin’s network. The company’s president, Han Sung-bon, says that despite the risk, it’s the right decision.

“Aladin’s used-book stores are masquerading as second-hand book shops, but they are essentially discount shops aimed at moving new books. These shops have been encouraging twisted, unconventional discount activities that are hurting the health of the entire market.”

Not surprisingly, Kim Seong-dong, a marketing official at Aladin, downplayed such concerns, saying that new titles less than six months from publication date account for just 2% of sales at the company’s stores over the last six months. He also went on to deny accusations that Aladin is purchasing large quantities of new books from publishers at a reduced price.

“Our shops aren’t being used for dumping,” he told the Korea Times. “There are publishers who are desperate to reduce their inventories and they scramble to sell those books to different bookstores in exchange for quick cash. Some of those books reach our stores, but they account for just a small number of the books sold in them.”

Would a fixed book price law help or hinder Korea in the time of crisis? Let us know what you think in the comments.