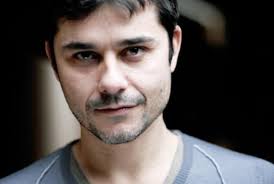 This past Saturday in Houston I had the pleasure of speaking to Laurent Binet, the author of HHhH, a meta-textual meditation on the 1942 assassination of the Nazi Reinhard Heydrich, “The Butcher of Prague,” by a pair of Czech and Slovak partisans. A decade in the making — “At one point, I realized I’d better stop reading about the assassination and start writing about it if I ever expected to publish a book,” joked Binet — the novel won the Prix Goncourt for best first novel in 2010 and was shortlisted for the National Book Critics Circle prize for fiction.

Much to Binet’s pleasure, the former high school teach can now boast that excerpts of the novel are now included in anthologies used to teach students French literature.

HHhH has also now been translated into more than 20 languages.

In our interview Binet touches on the differing reception of the book outside of France (in Spain, they loved it; in Germany, not so much…), the reticence of readers to confuse the narrator with the author (“It’s okay!), as well as his influences, which include Milan Kundera and William T. Vollmann.