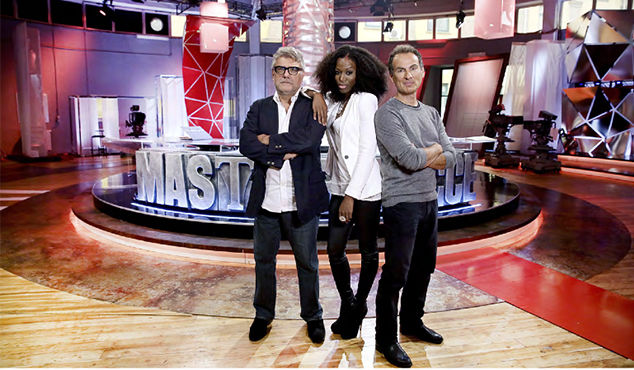 ROME: Masterpiece, an Italian TV Reality show on Rai 3, the new experiment to discover the Next Big Writer and boost reading in Italy, has been  discussed with much sarcasm in the European and American media. Of course few of the pundits have actually watched the show. When it premiered last weekend, I watched, fascinated, through the hour and a half it lasted (including publicity clips, among them one from Amazon for its Kindle — remarkably, nothing from Kobo although it’s ereaders are present in Italy in virtually all major bookstores).

I kept wondering how they would manage to inject TV glamor into an industry that is quintessentially conservative, intellectual and remote. That remoteness is also congenial to writers who are solitary souls that tend to communicate only through the written word.

Can writers be taught to communicate visually?

Made for TV Glamor

Rai 3 really tried. First, the jury was not just constituted by heavy-weights on the Italian literary scene, it also included beautiful Taiye Selasi, an American of Nigerian and Ghanaian origin, who is also a rising international literary celebrity and considered among of the top writers under 40′ in the world (she happens to live in Rome). The jury, visually smashing, was presented at the opening of the program like Hollywood stars to the beat of rousing music. Well done!

The role of Massimo Coppola as a coach also came through with effective snippets, showing him giving emotional support and technical advice to the competing writers (70 had been pre-selected from 5,000 applicants). Poor writers, they were certainly under pressure and needed his support: the jackpot is any writer’s dream, to be picked up by one of your country’s major publishers (Bompiani) and be given a first print run of an astonishing 100,000 copies.

The pressure showed, there were arguments and even breakdowns and repressed tears, victory signs for the winners and dashes out of the room for the losers…Because of the eight writers who turned up for this episode, only one was selected to remain in the race. One thing for certain, Italian writers, even intimidated as they were, showed that they shared in the national ability to express feelings operatically. The jury too had its moments of fury and rants. I wonder if such a show would be quite as colorful if done in another country where citizens are more staid?

So was it a rousing success?

Not quite. I believe it could be improved. The first part — it lasted about 20 minutes — didn’t work well at all and my husband got annoyed and walked out of the room. I wonder how many other viewers the show lost this way. Why? Because we were being shown snippets of the audition process to select the contestants, and it was not at all clear on what basis the contestants were selected. Excerpts were read by their authors, poorly I might add — and the stuff sounded like really bad literature (though it is difficult to judge when everything happens at an accelerated pace). In short, the selection process was boring and lacked transparency.

However, the show was saved by its second and third parts. In the second, the chosen contestants were thrown into unexpected situations and told they would be given half-an-hour to write about it in the third part of the show.

Two of them were sent off to a refugee home run by a Rambo-type priest and the other two were invited in a “balera,” an old-fashioned disco for senior citizens, dancing to 1950s and 1960s tunes. The camera followed them in these visually interesting experiences and then showed them hard at work to write their report.

The ensuing process of selection was suspenseful and credible and the last part of the show, an “elevator pitch” was well done and fun to watch. The last two contestants still in the running were, quite literally, shown into an elevator to pitch their book in 59 seconds as the cabin whizzed up, with Elisabetta Sgarbi, the Editor-in-Chief of Bompiani, listening — an impressive woman with a beautifully chiseled  face and black eyes who stared at them, as unexpressive as a marble statue. You suddenly got an amazingly clear idea of what kind of book they had written; the authors were two very different types, a gaunt young man and a mature, florid woman. Of course, only one (the gaunt young man, Lilith di Rosa) came out of this ultimate and harrowing test that we, as writers, only know too well.

Conclusion? I think something must be done to improve the first part of this show — I am not quite sure what, but as it is, it doesn’t work. Perhaps it should be skipped altogether and we are immediately presented with the four contestants and the obstacles they must overcome.

The idea of throwing them in a situation and force them to write about it afterwards in 30 minutes really works. Sure, some of the contestants weren’t happy about it, arguing that the writing process needs time and isolation and cannot be done in public under the glare of TV cameras. True enough. It is obvious that a reality show isn’t for everyone. If you can only write in the peace of your bathroom, well, don’t sign up for a reality show!

Some have argued that the idea of a reality show was a bad one because personal humiliation was a key ingredient of such shows. I agree that there would be no pleasure in seeing an aspiring writer embarrassing themselves to get a book deal, but that is not what happened here. Nobody was humiliated, the losers were simply told to walk out. Which is as it should be, and none of them protested afterwards, they took it gracefully, as shown in their comments, very democratically picked up by the camera.

Incidentally, the Italians seem to prefer to call it a “literary talent show”, not a reality show, see here… I like that, thumbs up! For reactions from viewers as the show unfolds go to the Masterpiece Facebook page, here.