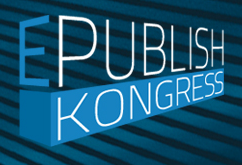 BERLIN: A month after the Frankfurt Book Fair, where German publishing declared it was “the year of the start-up,” the two day E-PUBLISH conference took place last week in Berlin. Several keynote speeches and smaller ‘table sessions’ continued the book branch’s focus on start-ups and innovation in digital publishing, with topics like entrepreneurship, new business and pricing models such as subscriptions, as well as the BUDIP award for innovation. In addition, the violinist Seth Schwarz opened both days of the conference with his electric violin and loop machine. His mash-ups of electronic, hip-hop and classical music set the mood for debates about innovation and multimedia.

Several speakers touched on the changing role of the author. Dr. Gunter Faltin (Free University) compared self publishing to the fair trade movement, highlighting how “cutting out the middleman” enables authors to create one-on-one relationships with readers. The evening speaker, Dirk von Gehlen, journalist and writer of Eine neue Version ist verfügbar (a new version is available), emphasized the importance of connecting with readers by drawing from his own experience with crowdfunding. By crowdfunding, authors can share the writing process with readers, which means that readers are not just buying a book, but the experience of seeing how a book comes into being.

The German Book Prize winning author Katharina Hacker introduced the new author collective Fiktion, which started with a declaration. As a laboratory for international authors, Fiktion wants to radically rethink ebook distribution. For instance Hacker asked “Does free access lead to the destruction of traditional payment structures, or help authors to (re) discover readers?” They hope to develop solutions through collaboration — both with authors, universities and lawyers. Hacker expressed that fiction writers are increasingly worried that changing media consumption makes readers less able to concentrate on complex, long texts. She said: “we aren’t concerned that content can be distributed for free online, circumventing us, but that our way of writing and thinking is being marginalized.” While she didn’t offer any concrete solutions, like other participants in this year’s E:PUBLISH conference she emphasized the necessity for experimentation, being open to new approaches and not being afraid of failure.

As self-publishing is on the rise in Germany, there was much also debate about how publishers can prove their value to authors. Elisabeth Ruge, head of Hanser Berlin, emphasized that publishers shouldn’t forget the importance of sharpening their own profile. Another workshop group concluded that book publishers have to increasingly become service providers, topic scouts and community managers. In other words, the focus has to be on serving authors and appealing to readers with relevant content. Manuela Schauerhammer challenged publishers to use digital mediums for more inclusivity in kids books: “Why not portray a choice of body types or ethnic backgrounds?” she asked.

Many presenters also concentrated on the future of formats. ePub 3 and interactive formats, such as the Tiger format for animated children’s books, were widely discussed. In one keynote, the blogger and children’s book expert Manuela Schauerhammer shared her experience on how kids read in the digital era. For instance, older kids consider animated books to be too childish. Several school kids told Schauermacher they preferred to work online as opposed to with ebooks: “I’d rather work online, where I can click to other websites, copy text, watch videos.” Finally, Schauermacher made a case for using digital mediums more inclusively — why not portray more children with different body types or ethnic backgrounds? Why not offer more bilingual ebooks? She concluded with the appeal that “the internet is international — cooperate with digital.”

At the conference a number of new approaches to digital publishing were also discussed. The CEO of GRIN Verlag, Christian Damke, said that publishers have to realize they are “IT companies with a cultural mission.” GRIN and their partner marketing agency Bilandia help publishers develop content strategies in which all channels work together as part of one unified “ecosystem.”

‘Digital first’ publishing was also on everyone’s minds. Ebook only publishers such as Dotbooks, CulturBooks and Sobooks (a browser-based e-book store and publisher) were often mentioned as examples of true innovation in publishing. Dotbooks offers “XXL-sized book excerpts”, as they’ve seen that readers are more likely to buy a book after reading up to 40% of it. The digital first publishers can more quickly adapt to the demands of a rapidly changing marketplace. Those which sell directly — such as Sobooks plans to do – see the benefits in owning customer relationships and the data about their target groups’ reading habits.

E:PUBLISH also awarded the BUDIP prize (Buch Digitale Innovation Pitch) for innovative ideas in digital publishing. The candidates had to propose ideas to the jury in 3-minute blitz presentations. They offered a variety of creative solutions, from the “emo-meter,” which could recommend books based on mood, to Blinkist, an app which lets users read bite-sized articles based on nonfiction books as a way of discovering new reads. This year’s prize was awarded to Dennis Brunotte for agentme, a platform which connects authors, agents and editors to sell rights internationally.

Overall, E:PUBLISH 2013 provided few hard facts about the state of digital publishing in the German market. Instead, the gathering captured publishers’ and authors’ yearning for change and gave a good sense of the mood in the industry. Beyond ‘start-up fever’, many publishers still have reservations about how to create sustainable business models in the changing market. As von Gehlen mentioned, since digital largely solves the “problem of scarcity” in the arts, it’s more difficult to monetize that content. As cultural products shift more and more to being experience-based, book publishers need to change tack in order to offer more added value. In table session conversations, many suggested adding additional functions to e-books to make them more appealing. However, other participants recognized this product-based thinking as problematic. Do readers really want extra frills, or simply the opportunity to interact and connect?

One side comment was particularly telling. A participant explained the Wattpad business model as “a publisher which only consists of a technical platform, and they don’t even want to make money!” While this is a gross understatement at best, it aptly captures the gap in thinking between traditional publishing models and online publishing. At the same time, projects like Sobooks and Flipintu acknowledge that book publishing needs to learn a lesson or two from online models in order to remain relevant and user-friendly — which even school children recognize.

At the E:PUBLISH conference one could sense the excitement and curiosity about what lies ahead for German publishing. Many echoed the statement of Günter Faltin, who emphasized that “innovation needs to come from outside” the industry. This year’s conference hosted a variety of newcomers. Yet the question remains: will a changing of the guard be enough to create a large-scale shift in publishers’ attitudes, or will ‘digital first’ thinking remain the territory of authors, start-ups, and industry outsiders?