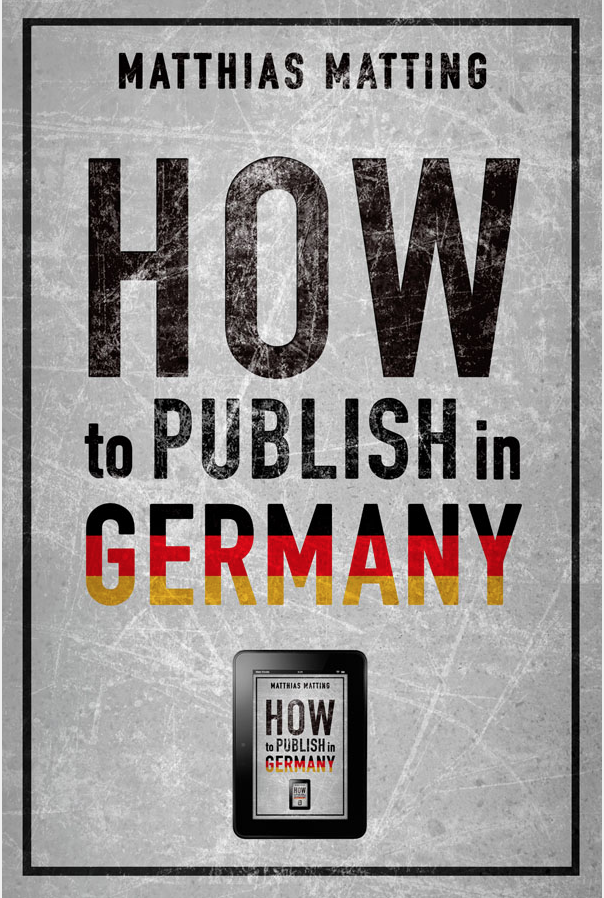 When Amazon started its Kindle business in Germany in Spring 2011, it launched the new e-reader together with the Kindle Direct Publishing program (KDP). While the Kindle was far better than other e-readers that were on the German market — especially with its built in ebookstore and wireless access to ebooks in the cloud at a time in Germany when every other e-reader required a PC with Adobe DRM software to buy electronic books — Amazon basically sold the same ebooks as every other retailer.

As the German fixed book price law doesn’t allow anyone to sell ebooks at different prices (“Preisbindung”), Amazon couldn’t differentiate its offer by offering bargain pricing as it did in the United States and elsewhere. So KDP was, ultimately, a perfect  strategy for the book giant to pursue in Germany. It didn’t take long until authors discovered it was a great way to earn money with books that publishing companies had rejected. All the other German ebook retailers, such as Thalia, Hugendubel or Weltbild, hesitated to sell self-published books. And as of today, there remains no significant German based ebook retailer with a self publishing program, not even the recently-formed Tolino alliance offers that, by all accounts, took its time to even accept self-published ebooks from distributors like Xinxii, Neobooks, or Smashwords. The end result has been that fully half of the ebooks from Amazon’s top 100 list in Germany are self published. A third of the top 100 ebooks are only available from Amazon – so it’s no wonder that the company has a market share of (depending on whose numbers you trust) between 40% and 70%. In a survey by selfpublisherbibel.de (an English translation is available) answered by 500 authors, some 40% confessed they used Amazon’s KDP Select, a program that demands exclusivity.

At selfpublisherbibel.de you can find the daily sales numbers for ebooks at Amazon.de. You’ll see that these numbers are much lower than in the US — selling just 500 units per day will likely put you in among the top three bestsellers. In addition, there is less competition, making it much easier to land a “Top 100” spot, something which improves and begets more sales

All in all, there are around 70,000 people in Germany that have self published in one or another, though not all of these people would consider him or herself an “author” as such.  Most of them are publishing electronically, but there is also a substantial number that still want their book printed.

For ebooks, Amazon is the clear leader, but there are four other companies where authors can publish directly: Google Play (which is quite full of erotica, a segment which is somewhat less visible — the likely equally present — on Amazon), Kobo (which is only very slowly gaining ground, as it lacks a connection to the larger book chains), Apple (where publishing is more difficult for German authors, as Apple requires a US tax number to open an account) and Beam-eBooks (a small company focusing on DRM free ebooks).

To reach the other retail platforms with a significant marketshare — Thalia, Weltbild, Hugendubel are the most important —, every author needs a distributor. These come in different flavours. BoD (formerly Books on Demand) comes from the legacy print business. While something of a household name with a significant business, when it comes to ebooks, they remain at something of a disadvantage to some of the larger, young distributors, such as Neobooks and ePubli (both owned by Holtzbrinck), and Xinxii and Bookrix, both of which are independent.

Neobooks has attracted the most authors yet even though for a long while they demanded exclusivity, which resulted in fewer profits for authors (today, that has changed). ePubli differentiates itself by offering authors both print and e-book distribution.

Can You Earn a Living Self Publishing in Germany?

Nika Lubitsch is looking to translate her self-publishing success from Germany to America.

So is it possible to earn a living, being a self published author in Germany? Absolutely, yet. Around 4% of those in our survey said they earned  more than €2,000 per month. In March this year Amazon announced that eight German authors earned more than €100,000 through the KDP program. I am proud to say I am one of them.

Crime writer Nika Lubitsch is another and she’s trying to break into the US market right now with the translation of The 7th Day. Marah Woolf is writing fantasy, after finishing the “Mondlicht” trilogy she has now started the “Bookless” series. Emily Bold’s “The Curse” series of romance novels already made it to the US via AmazonCrossing. The first author to sell more than 100,000 copies via KDP in Germany was Jonas Winner, whose “Berlin Gothic” thriller series was also published by Amazon Crossing.

As elsewhere it is romance, crime, thriller, and fantasy that dominate the ebook charts on amazon, and most are not coming via a distributor but are published with Amazon directly. While the competing distributors have a few bestselling authors among their ranks, the largest share remains with KDP Select. The reason is simple: Amazon is taking care of its authors, allowing top sellers the ability to offer pre-orders and generally delivering timely sales data, something which is essential to marketing efforts.

How are publishers reacting to the self publishing trend? They took some time, but are now trying to find their own place in the system. Some companies are adopting typical self publishing price points for their titles, such as €2.99 or €3.99. Others are luring the bestselling authors into contracts — they still have some value proposition as they are the only ones capable of reaching bricks-and-mortar bookstores with print books, an off-limits area for self publishers. Some are preparing jump to the self publishing game themselves, much like Holtzbrinck has with Neobooks and ePubli.

Matthias Matting is a journalist and author of more than 30 books in six languages. He runs selfpublisherbibel.de, the top site for self-publishing in Germany. An English-language edition of his ebook How to Publish in Germany is available now.