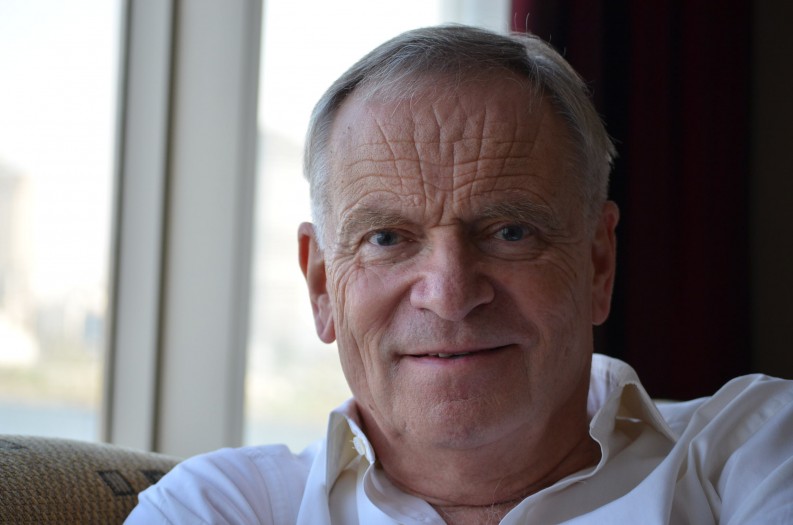 You have to tread carefully with Jeffrey Archer. The international best-selling author may be 73 now, but he’s lost none of his zeal and ambition. His voice can quickly change to a kind of barked, almost shouted response to a question. It can seem aggressive. It isn’t necessarily — it’s just that he so clearly still wants to be number one in whatever field it might be — whether that’s raising money for charity, something at which he has proved particularly adept, or writing novels — that he can’t stop himself.

Lord Archer — he was ennobled in 1992 and sits at least once a week in the House of Lords — was speaking exclusively to Publishing Perspectives at the Sharjah International Book Fair earlier this month, where he topped the bill of visiting authors. He was treated like royalty during his two-day visit — literally. At the Fair’s opening ceremony he shared the top table with His Highness Dr Sultan bin Muhammad Al-Qasimi, Ruler of the Emirate of Sharjah, where he joined the Sheik’s retinue of government ministers. We met in his suite at the Hilton, overlooking Khalid Lagoon with its shiny, high-rise apartment blocks interspersed with mosques. Archer’s a grandfather now, his face heavily lined, the hair short and silver. There’s a mobile in front of him, but when it rings he has a little trouble answering it, peering at it and saying to himself “’Slide to answer’…but that’s what I’m doing…”.

It was a rare sign of vulnerability. But if there are some hints of aging in the man who famously ran the 100 meters for England in 1966, there is certainly no diminution in energy. If anything, he seems to be moving into a new gear at the moment, thanks to the Harry Clifton series, the latest of which, Best Kept Secret is just out in paperback from Pan in the UK and St. Martin’s Press in the US.

Mention easing off and he interrupts and puts you right. “What!” he barks. “I’ll tell you what happened. When I gave up politics — or politics gave me up — I decided to focus, and on my 70th birthday I made a decision: I’m going to write a five-book series. That will keep me going until 75 and will drive me. The problem is, that the second book sold 40% more than the first book; the third book sold 28% more than the second book; and I’ve just handed in the fourth book and Harry Clifton, whom the whole series is based on, is only 44 years old. So I went back to the publisher and said, I’m in real trouble. It’s going to have to be a seven-book series. So it’s now a seven-book series and I go away in January to write number five.”

This is classic Archer. He knows all his figures and rattles them off. One can imagine how sales directors of old may have been intimidated. Where does this drive come from? “I don’t know. When I wake up in the morning, I don’t look up at the ceiling and say ‘Lord, why am I so driven?’ I put both feet on the ground and think: ‘John Grisham — you’re not up yet, I’ve got five hours on you…’”

But later on he relates how his journalist mother decided to take a degree at the age of 52, and how she had at least one unpublished novel stashed away at home, so it seems fair to assume that he has inherited both his mother’s desire to write and her ability to face new challenges.

There are certainly some editors who wince at mention of his name, perhaps having had one-on-one editorial sessions with him that they would rather forget. But it seems one crime he won’t be accused of is late delivery. In fact, he’s one author who is likely to deliver early.

If you ask him about his writing technique, whether he jots ideas down or wait for inspiration, he interrupts again to exclaim: “Wait? What would I wait for? It’s all there, ready to go” — he taps his head — “I’m ready to go in January now!” He is also very switched on about changes in the industry and current bestsellers. “Five years ago I wrote a book called Prisoner of Birth – 5% was ebook. This latest book, Best Kept Secret, 55% was ebook. The bookshop’s finished. The bookshop’s over. If I could do anything about it, I would, but I can’t go from 5% to 55% in five years and believe the bookshop is going to survive.”

He owns a Kindle and loves the instant access it affords. “A lady said to me the other day at a party — very flatteringly — that Kane and Abel was one of the best five books she’d read in her life. What were the other four? And the top one was Beware the Pity by Stefan Zweig, so after the party I went home and read ten chapters on my Kindle. It was a privilege to read it — it is so good.”

He finished John Williams’ Stoner on the plane to Dubai and also recently enjoyed Jonas Jonasson’s The 100 Year-Old Man Who Climbed out of the Window and Disappeared. He likes to keep up with what is around and listens to recommendations. “If someone gets to number one, and stays there, or is a big number one, I do try to work out why, I do read them. I mean, E L James. How can a book stay in the bestseller lists for 66 weeks? I’ve got to read it and see what I’m not doing. But it’s not me. I don’t do that. I don’t do erotica. I don’t do ghosts.”

His new series, which fellow novelist Anthony Horowitz describes as “absurdly enjoyable,” began in 2011 with Only Time will Tell and tells the story of Harry Clifton whom Archer says is very like his creator. “He’s born in the West Country in Bristol. Born to parents who had nothing, fights his way to the local grammar school, fights his way to Oxford, called up — I put him 20 years ahead of me — called up to fight in the war, so he loses his place at Oxford because he decides to go to war…”

We follow his falls and recoveries, something Archer certainly knows a thing or two about. A re-cap may be necessary here, because younger readers may not be familiar with the details and the story may not have travelled as far as one assumes. In 1986 the British tabloid the Daily Star alleged that Archer had slept with a prostitute. Archer successfully sued the paper for £500,000 the following year. A letter written by Archer’s friend, the TV producer Ted Francis, gave him an alibi for the night in question.

But a decade later, the pair had fallen out, the story being that Archer embarrassed Francis at a party by publicly mentioning some money he had leant him. Francis took spectacular revenge, telling the News of the World that the alibi Archer had asked him to provide was false. In the subsequent trial in 2001 the judge famously told the jury: “Remember Mary Archer [his wife] in the witness box. Your vision of her probably will never disappear. Has she elegance? Has she fragrance? Has she had a happy married life? Has she been able to enjoy, rather than endure, her husband Jeffrey? Is he in need of cold, unloving, rubber-insulated sex?”

The jury heard how Archer asked his secretary to make false entries in a bogus diary for the 1987 trial. She told them that she bought expensive gifts for his mistress using her own credit card so that there would be no trail to her boss. Archer was found guilty of perjury and perverting the course of justice and was sentenced to four years.

It’s pretty seedy, pretty tacky stuff. How does he feel about it now? “Well, it’s ten years ago, so it’s not a distant memory, but it’s a memory, and I think the decision to focus on the books and the fact that ten books have all gone to number one, the fact that I’ve raised £20m for charity…It’s quite right that you ask the question, it’s your job, I have no quarrel with that. But the public don’t seem to be at all interested.”

Hmm. I try another tack. He has one grandchild, Alexander, who is a year old. I ask him to scroll forward to when Alexander is 12, say, and wants to find out a little more about granddad. Surely he must feel uncomfortable at the idea of his grandchildren reading all of that. Isn’t he embarrassed?

“It’s a lovely way of saying it. I’ve no idea what my grandchildren will think. They’ll be living the high life because of me. But look, I’ll tell you a secret that will solve your problem once and for all. When I came out of prison and had my Christmas party, I sent out 400 invitations for the two days. Four people refused to come. I think that tells you. They actually weigh the other things you’ve done in life, and the way you’ve treated other people.

“The day I came out, what did I have? Handwritten letters from Margaret Thatcher, John Major [former Prime Minister], Malcolm Rifkind [former Foreign Secretary]…Margaret Thatcher took me to lunch three days later at the Ritz at the centre table, so she was making her statement very firmly.”

One more try to see if he admits to any stupidity. Falsifying diaries and the rest of it – what was he thinking? Surely this is mad behavior? “I’m not a person who looks back the whole time. You see, one of the problems in life is if you spend your whole life looking back, you don’t do anything else in life, you just feel sorry for yourself. I made this determination to write, to do my charity work, and get on with it.”

He certainly does that. His £25,000 fee for his appearance at the fair is destined to be split between the lifeboat fund at Weston-super-Mare, which he represents in the Lords, and Addenbrooke’s Abroad, the charity his wife runs that sends staff to train surgeons in other countries. And with that the inviolate Archer, with his steely self-belief, is off to catch the red-eye back to London to host yet another charity auction.