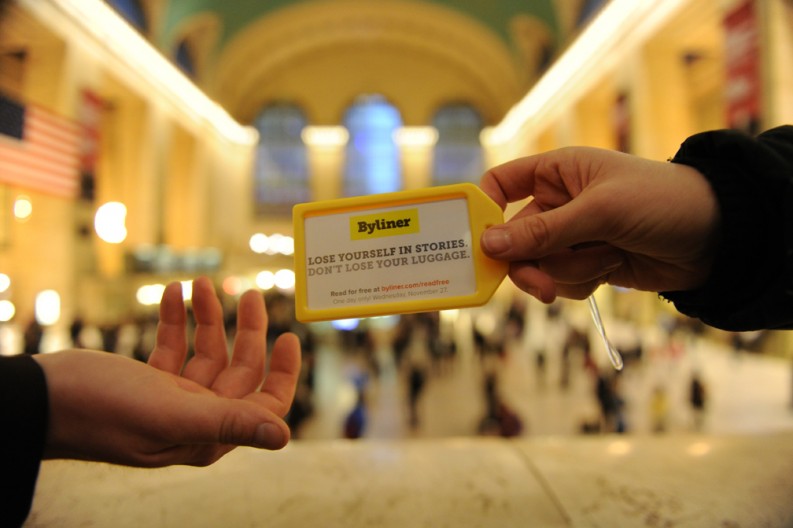 On Tuesday, to kick off this “ThanksReading,” promotion teams took to the streets in New York and San Francisco to pass out thousands of Byliner-branded luggage tags to commuters as they head home to pack for their journey. Cards inside these luggage tags will feature the “ThanksReading” URL as well as information about the promotion.

I’m a big fan of the online reading and publishing platform Byliner. If you haven’t checked it out already, I urge you do it — especially if you’re a fan of long form narrative nonfiction of the sort that used to regularly appear in magazines. And if you know a fan, a subscription might just be the perfect holiday gift — I dare say, it might even make buying new nonfiction books (for the time being, at least) redundant. After all, aren’t the very best parts of many nonfiction book already previously published in magazines and online?

Byliner first came to most people’s attention with the publication of John Krakauer’s “Three Cups of Deceit,” his investigation into malpractice at Greg Mortenson’s Central Asia Institute (CAI), published in April 2011. Today, the platform has expanded its program of original publishing and has become my go-to source for mining the back catalog of several of my favorite nonfiction writers, such as Sport Illustrated’s Gary Smith — the under-appreciated hero of profile writing, or William Langewiesche.

The depth of Byliner’s selection is deep and includes, I dare say, most of the top practitioners of the craft of magazine-style writing. It’s also a fantastic way to discover writers who may have slipped your notice. You may already be familiar with the work of someone like Michael Pollan, Ron Rosenbaum, or Lawrence Wright, but how about Meghan Daum, Wright Thompson, Tom Bissell, or Evan Wright?

Byliner is also affordable: $60 gets you one-year subscription, $35 for six months, or you can try it now for $5.99 a month — cheaper than your typical ebook.

Through the rest of this holiday weekend you can sample 30 stories for free, including three bestselling Byliner Originals and 12 exclusive stories, including work by Michael Pollan, Mary Karr, Jonathan Lethem, Mary Roach, and Jon Krakauer.