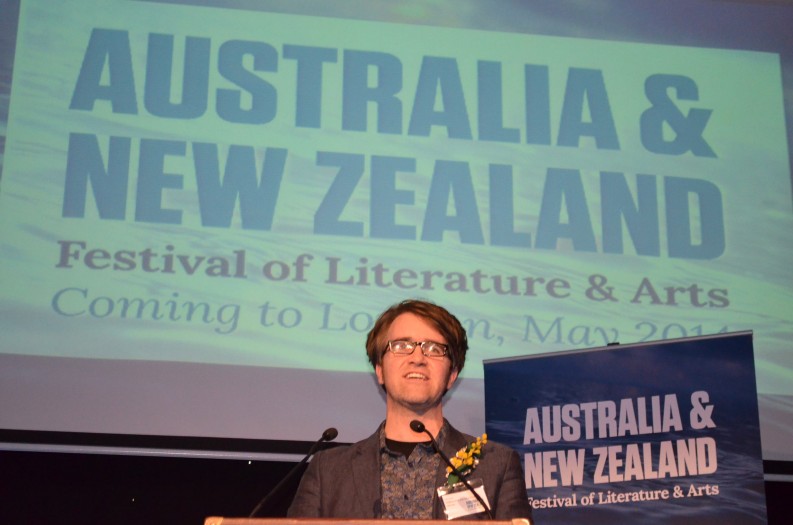 LONDON: Like one of those giant waves you see in surf films, the Australia & New Zealand Festival of Literature & Arts (ANZFLA) is rising and rising, ready to peak in May next year when it will come sweeping into London in a great, long overdue celebration of ANZ writers, musicians, artists and film-makers and more. Credit must be given to Festival Director Jon Slack of Amphora Arts and his team for building the swell as they have — for having the vision and securing the support already in place.

The Festival had its official launch on Monday night with a grand, well-attended and imaginative event at the Australian High Commission in London. If anyone was in any doubt about the cross-industry support for this new venture, they only had to glance across the crowded room. From publishing there was Bloomsbury CEO Nigel Newton and his Sales and Marketing Director Kathleen Farrar, Two Roads (Hodder) Publisher Lisa Highton, Faber Sales and Marketing Director Will Atkinson, and agents Caroline Michel of PFD and Ed Wilson of Johnson and Alcock.

London-based ANZ authors included John Pilger, Kathy Lette and Peter Walker, whose novel Some Here Among Us has just been acquired by Bloomsbury. HarperCollins’ Scott Pack was also there with debut Kiwi novelist Janina Matthewson. Other guests included publishing doyenne Liz Calder – former Editorial Director of Cape, co-founder of Bloomsbury and founding director of the long running FLIP festival in Brazil – along with Bill Samuels of Foyles, both of whom have been appointed ANZFLA trustees.

A theme of ‘voyage’ was the decorative motif for the room, as in a sea journey both to and from the Antipodes.  The Australian High Commission itself is a glorious building, redolent of the great days of ocean travel when emigrants from the UK were offered bargain tickets to being a new life on the other side of the world — the so-called ‘ten pound Poms.’ So there was a beautifully laid-out ‘Captain’s table,’ with a globe and an atlas and a telescope – and displays of ‘books for the voyage,’ these being works from seven of the ANZ writers who will be taking part in the festival. Author John Pilger will be among the featured writers at the festival.

All guests received a ‘boarding pass’ on coming into the party, allowing them to choose one title for their own ‘voyage’ home that evening: a very good idea that proved extremely popular.

The evening also saw a production of Namatjira, a retelling of the life of the Aboriginal artist Albert Namatijira, by the Australian social arts and justice theatrical company, Big h’Art.

Speaking from a podium of battered, Thirties-style suitcases, Australian High Commissioner Mike Rann said: “Our two nations are closely bound by language and history. We’ve been partners in peril and partners in peace.  There are 400,000 people from the Antipodes living in the UK and there are one million Australian tourists every year who spend more on culture per head than any other group. Australians are part of the cultural DNA of the UK. The Australia and New Zealand Festival will offer audiences in the UK a unique opportunity to reconnect with some of their favorite writers, as well as discover new voices coming out of Australia and New Zealand.”

His counterpart from New Zealand, Sir Lockwood Smith, called the festival “an incredible opportunity” and turned to Slack, to add: “Thank you, Jon, for your vision and your extraordinary work.”

The self-effacing Slack told the crowd that this event was the “Point of departure.  I was born in Adelaide and raised in New Zealand and I’ve lived for ten years in London. Why this festival? Because I wanted to answer the question what do these two countries mean in the eyes of their people and the world. We will have a special focus on the writers and artists themselves – we hope it opens doors for them, and opens minds too.”

He said that more than 30 writers and artists have been confirmed, including Clive James, CK Stead, Evie Wyld, Fay Weldon, Fleur Adcock, Stella Duffy and Tony Wheeler (founder of Lonely Planet), in addition to Pilger and Lette.

The award-winning author Tim Winton will open the festival on May 29, 2014 and the Academy Award winning screenwriter, producer and director Jane Campion will be a Patron. The festival will take place at King’s College, London and run until June 1. News UK, part of News Corp, publisher of the Times and Sunday Times, is the official media partner.

“It is a very exciting initiative which will increase the visibility of Australian books in international markets,” said Jill Eddington, Director of Literature, Australia Council for the Arts. “This festival will provide a great platform for our writers to connect with readers and reach new audiences around the globe.”

Creative New Zealand Chief Executive Stephen Wainwright said: “We are delighted to be supporting the inaugural Australian and New Zealand Festival of Literature and Arts with our Australian colleagues. The festival will raise the profile of literature from our two countries, and give our expat communities and Londoners the opportunity to personally engage with Australasian writers, stories, food and wine.”

Lisa Highton of Two Roads, who has been Publishing Director of both HarperCollins and Hodder in Australia but is now based in London, is on the advisory panel and said: “Bringing Australia and New Zealand back into the cultural spotlight is overdue.  The new culture of Australasian writing is more sophisticated than most people think and is clearly world class.”