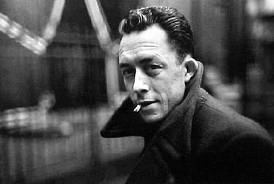 France is celebrating the centenary of Albert Camus’s birth this November 7th. Books have been published and re-issued and events are ongoing to commemorate one of the country’s preeminent intellectuals. From BD (graphic novels) to a film adapted from one of his short stories (starring Viggo Mortensen) Camus’s body of work provides endless inspiration and food for thought.

Three years after he won the Nobel Prize for Literature, the French writer and political philosopher, Albert Camus, died in a car accident at age 47 along with his publisher, Michel Gallimard. The unfinished manuscript of what would become his posthumous novel Le Premier Homme (The First Man) was recovered from the wreckage.

The First Man was published in 1994, unedited, with notes by the author, which not only gave an insight into how Camus worked but also into his childhood—it is entirely autobiographical.

Albert Camus was born in Algeria in 1913, which at the time was a French colony. His father was killed one year later during the First World War, and Camus was raised by his mother and grandmother in the working class neighborhood of Belcourt, in Algiers. Camus grew up in poverty, his mother, who was illiterate and partly deaf, worked as a cleaning lady. A good student, Camus was taken under the wing of one of his teachers, Louis Germain, whom he tenderly described in The First Man.

Several letters between Camus and Germain are included in the appendix of the novel, including Camus’s letter to Germain shortly after he received the Nobel Prize: “…when I heard the news, my first thought, after my mother, was of you. Without you, without the affectionate hand you extended to the small poor child that I was, without your teaching, and your example, none of all this would have happened. I don’t make too much of this sort of honor. But at least it gives me an opportunity to tell you what you have been and still are for me, and to assure you that your efforts, your work, and the generous heart you put into it still live in one of your little schoolboys who, despite the years, has never stopped being your grateful pupil…”

Germain replied to Camus, adding that he had never known just how poor Camus was as a boy.

Camus studied philosophy at the University of Algiers, (as well as passionately playing football) but also contracted tuberculosis at the time, which he struggled with throughout his life. He wrote for a local socialist newspaper, which was critical of the French government and its policies in Algeria. Camus left Algeria for France in 1940, on the eve of the German occupation, and soon joined a resistance cell and newspaper. During this period of time Camus formalized his philosophy of which morality, derived from his own experiences, life-long support of human rights, justice and pacification were the foundation. During the 1940s and 50s he published his work, non-fiction and fiction, among which Le Mythe de Sisyphe (The Myth of Sisyphus), L’Homme Révolté (The Rebel), and his best-selling novels, L’Étranger (The Stranger) and La Peste (The Plague). Camus was a leading voice for social change and the French working class, but fell out with the left wing intelligentsia and modern philosophers such as Jean-Paul Sartre, following his rejection of communism and later on the subject of the French-Algerian war. Camus positioned himself neither for nor against independence, denouncing a “reign of terror” on both sides. Instead, he called for peace talks, favoring a federation that would include a mixed population of Algerian, French and other ethnicities, with equal rights for all.

Ultimately Camus, who remained true to himself, was a solitary man, born in a colonized country with French nationality, yet feeling he was an exile in France, unable to forget an Algeria he felt so close to.