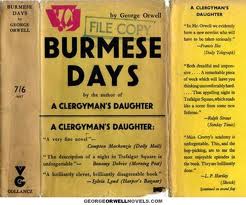 Writing in The Irrawaddy, Kyaw Phyo Tha reports that nearly eight decades after its initial publication, George Orwell’s Burmese Days “has won the highest literary award in the country where it is set: Burma.”

The Burmese Ministry of Information announced that an unabridged translation of Orwell’s first novel (published in 1934) had won the 2012 National Literary Award’s informative literature (translation) award.

The translator, Maung Myint Kywe, told the paper that he sees the novel, which is set in a small British colonial outpost in Upper Burma – as a “scathing portrait of the imperious attitudes of both the British and Burmese.” He said his goal in translating the book was, at least in part, as a way for young people to learn the history of discrimination against the Burmese during British rule. “But,” as he told the paper, “Orwell is unbiased, even though he himself is British. He has fairly portrayed how bad the British were, as well as we Burmese too.”

“I thought the Burmese should read it, and so I translated it,” said Maung, who, at 79, is as old as the first edition of Burmese Days.

Htay Jaung, the head of the award panel, said the book was unanimously selected out of almost 170 entries. “Because we all believed that, contrary to other books in Burma by the British, the book is quite balanced. Plus, the Burmese translation style is OK and conveys the meaning of the writer well.”

Of course, Orwell is not altogether unknown to Burmese readers. 1984 has long been admired by Burmese readers, drawn to its descriptions of “official deception, secret surveillance and the manipulations of an authoritarian state,” all quite familiar to those who lived under Burma’s military dictatorship. (Indeed, Than Shwe, Burma’s former dictator, was often referred to as “Big Brother,” which is, of course, the name given to the party leader in 1984.)

And while Burmese Days was translated in the 1950s and ’60s, according to Maung Myint Kywe, all editions were subsequently pulped. And it was only last year that a new version of 1984 became available.

Win Tin of Law Ka Thit publishing house, the publisher of the translations of both Burmese Days and 1984 said that “I wanted to publish those books for a long time but I could only do it in the last year.”

He also acknowledged that it was the loosening of governmental censorship last year that allowed him to publish both books, since “criticism of the Burmese in Burmese Days and the satirical view of dictatorship in 1984 would not have made it past the former regime’s censors.”

Even so, he has slightly mixed feelings, “I feel glad one of the books I’ve published has won the highest prize in the country. But I’m wondering: what’s wrong with 1984?”

And in a related story, The Raw Story reports that a group of artists has “launched a campaign” to protect and restore the town of Katha (the town that served as the basis for Burmese Days’ fictional Kyauktada).

“I am trying to do what I can to restore all the buildings in the book and to attract attention to the country and to the town,” said artist and Orwell admirer Nyo Ko Naing.

The campaigners want Orwell’s home in Katha, as well as the nearby European country club turned into a tourist attraction, “in a country where many colonial-era buildings have already fallen victim to the wrecking ball as investors flock to what they hope will be the region’s next hottest economy.”

“Orwell took many raw materials for his book Burmese Days from here,” said Nyo Ko Kaing. “I think this house and all the other places in Orwell’s book should be turned into a museum.”