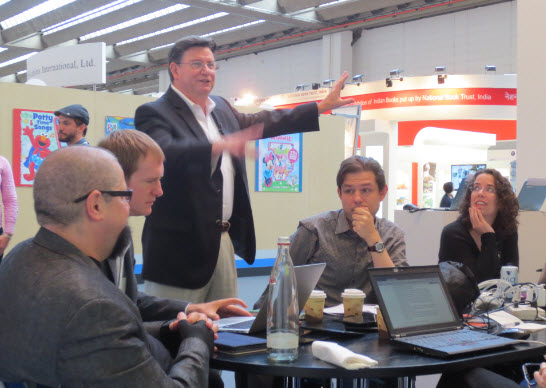 Jane Friedman, at right, is one of the publishing specialists brought in to work on the Sprint Beyond the Book project’s 72-hour book-production effort at Frankfurt Book Fair. Mike Jones, a consultant with Intel, is speaking to the group.

After spending the week at Frankfurt Book Fair talking about nothing but books, it might cheer a lot of folks to know that a new one has been written.

In the three days of the fair’s life. Seventy-two hours flat.

On Friday afternoon, don’t leave the Fair without stopping by Hall 8.0, N170, right beside the Publishing Perspectives Stage. There, Ed Finn, Director of Arizona State University’s innovative Center for Science and the Imagination is producing a book in league with a team of writers and technicians.

Sprint Beyond the Book is a project sponsored by Intel Corporation, in part to prototype a platform, an experimental effort to integrate publishing tools for an amalgam of text,

“The reason we call this Sprint Beyond the Book,” Finn said, “is because we realize we’re spending an incredible amount of effort trying to recreate the print experience online. And I think that’s a terrible mistake. Print books are a very mature tech. They don’t require a lot of power. They’re very durable. They’re easy to access. And we all  understand how they work.”

If, Finn said, we try to make digital books become what print has been for so long, “we’re missing the boat on all these incredible things that digital text can do that we don’t do right now. New types of collaborative texts, for example. Imagine sitting in a classroom and collaborating on a text, adding your notes, making your comments as you go through it together. ” Arizona State Assistant Professor Ed Finn, in the foreground, leads several initiatives at ASU’s Center for Science and the Imagination.

As Finn spoke, something along those lines was happening right behind him. Not a classroom, but a group of key writers in a Book Fair booth.

The team spent the week at a conference table,  intent on writing sections of the coming book and on presentations of the interface the platform is expected to produce. The ensemble–Finn, Jane Friedman, Joey Eschrich, Dan Gillmor, Leo Kon­stan­ti­nou, and Charlie Stross–are supported by several writers off-site including, Finn said, Exprima’s Corey Pressman and Intel futurist Brian David Johns0n.

Even with Intel’s strong technical support and sponsorship–and with the caliber of the specialists gathered around the project’s table in Frankfurt–getting something that can be called a book in 72 hours is no mean feat.

“It’s not as chaotic as I thought it might be,” said team member Jane Friedman. She’s the Digital Editor for Virginia Quarterly Review and the former Writer’s Digest publisher, a noted expert and speaker in the field of digital developments in publishing. She’s also the author of a satire on the topic (The Future of Publishing: 14 Variations), and in this case is contributing to each of the main chapters of the book being co-written with her associates.

Each chapter of the Sprint Beyond the Book text looks at a question:

“I just finished a piece on how to publish an ecosystem of change–who decides what gets published?” Her concept, she said, is that such decisions will be dispersed among various stakeholders in a publishing project, a scenario that industry observer Mike Shatzkin has termed “atomizaition.”

Each member of the team has contributed some 2,000 to 3,000 words daily, Friedman said.

“And the work is going to continue” on the project, she said, as Finn’s program at Arizona State and Intel’s developer evaluate the results of the week’s proof of performance effort at Franfurt.

“It was fun to think about how things I’ve read and done most recently,” Friedman said, “are very interactive. This has kind of reinvigorating fiction for me. Maybe this interactivity isn’t a ploy of some kind. When it’s done well, it can be very interesting.”

We’re going to have a little celebration here,” he said. “We’re trying to make this process something of a performance, and we wanted to do something on the floor of the Book Fair that would be a little different, something we could share and invite others to join in on.

Passersby in Hall 8.0 have had chances to contribute comments on the key questions of the work, send in their own text and/or images.

There’s a site at SprintBeyondTheBook.com which includes a link for downloading the reader that’s available.

“There’s a discussion session section,” Finn said, “that in the future we hope can be much more robust. We’re hoping there can be localized, paragraph-level conversations,” in the mode of social reading and social writing that are popular topics at this stage in the digital disruption of publishing.

“You can imagine a future of crowd-sourcing on this platform,” Finn said. “Think of the ‘book’ as a performance space.'”