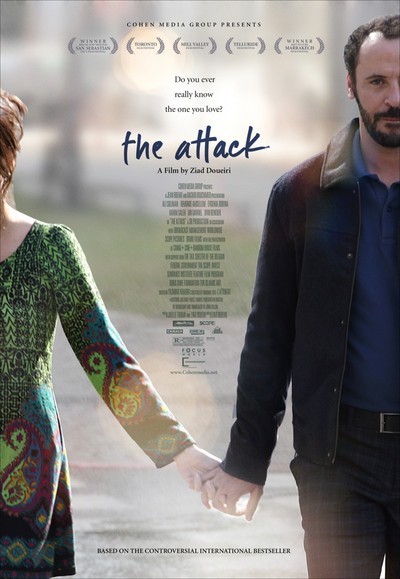 FRANKFURT: Last Friday, the Franco-Lebanese-American film director Ziad Doueiri and his wife, Joëlle Touma, a screenwriter, were awarded the €10,000 Frankfurt Book Fair’s prize for the Best International Literary Adaptation. Doueiri and Touma adapted Algerian writer Yasmina Khadra’s novel, The Attack (first published in 2005) and their film of the same name released in 2012, has gone on to win seven prizes in international film festivals.

It has also been the subject of much controversy, with the film being banned in Lebanon because of a boycott law that prohibits Lebanese citizens from going to Israel or doing business with Israelis—Doueiri shot his film in Israel and the occupied West Bank. Doueiri has also been accused of showing only a radicalized side to Palestinians in the film.

The Attack is the second book of a trilogy written by Khadra in which he examines the different facets of Islamic fundamentalism and in The Attack, specifically, the phenomenon of suicide bombers. The book has sold more than two million copies worldwide and is the third book of Khadra’s to be adapted as a film.

Filmmakers Initially Reticent, But Won Over

When Doueiri’s agent first came to him with Khadra’s book, he was reticent. Both Doueiri and Touma grew up during Lebanon’s 15-year civil war and Doueiri said he was trying to get away from the Middle East, even if his first, and critically acclaimed film, West Beirut, was about the war. But when Doueiri, who was unfamiliar with Khadra, read the book, he loved it. (He has since read all of Khadra’s novels.)

“It’s a very profound book, it’s so well structured and so well developed. There’s an investigative element and it’s a love story. Of course you condemn fundamentally all forms of terrorism but he [Khadra] gives it a voice, he gives a voice to the underdog.” Joëlle Touma added, “He gives it a human element, you can almost touch it even if you don’t understand it.”

And, added Doueiri, “no matter how much I wanted to get out of the region, it’s still a place that speaks to me.”

Khadra’s story is about a suicide bombing in Tel Aviv. A Palestinian-Israeli surgeon, Amin Jaafari, tending to the wounded from the attack is confronted by what seems to be an incredible accusation—his wife, also a Palestinian-Israeli—is the suicide bomber. (For the record, it should be stressed that the incident is not based on real events.) When it becomes evident that his wife was indeed the suicide bomber, Jaafari makes a journey to find out why and how the person he thought he knew most intimately could carry out such a barbaric act.

Doueiri and Touma decided to write the screenplay and worked very quickly, completing it in 9 months between 2006 and 2007. They then went through a lengthy process before the actual shooting began, which included being dropped by the original US producers (who offered as an explanation that they felt the script was going about in circles), then being picked up by a French producer who negotiated for several years to get the rights back from the US producer.

The most difficult aspect of writing the screenplay, said Doueiri and Touma, was the sensitive nature of the subject. In the book there were several powerful sentences that summed up the situation beautifully, but try as they might, Doueiri and Touma could not integrate them into the script without them sounding moralizing.

“In my earlier interviews I couldn’t remember very well, but now with the passing of time it was these lines, and yet we couldn’t get them into the script,” said Doueiri. “Yasmina Khadra knows how to gives a voice to the underdog, he gives weight to the protagonist and antagonist. He makes weakness the essence of justice. Some of the things he puts in the mouth of the bad guys are very powerful.”

Doueiri cited several phrases in the book he wished he could have used:

Reflecting on his wife, Khadra’s protagonist Jaafari thinks, “It was as if you made a barbecue on scorched land. You only noticed the barbecue; she saw the rest, the desolation that made your joy false.”

“We learn to veritably hate the instant we realize how powerless we are. It is a tragic moment, the most atrocious and abominable of all.”

Doueiri and Touma did not work with Khadra on the script, “he gave us total liberty,” said Doueiri.  “He was interested, but he was very respectful. He wanted to see the result. Like any writer, when your book is adapted by a huge director it’s very prestigious, and I’m not a big guy but he didn’t care. Plus he knew during the whole process that an American [producer] would not take many risks with the film.”

Ironically Doueiri and Touma were living in Beirut in 2006 when they were working on the script; that summer Israel bombed Lebanon for 33 days.

“All of a sudden I wasn’t sure that it made sense to do a fiction film when there was so much live coverage coming from the Middle East,” said Doueiri.

“It made writing fiction and a screenplay seem so ridiculous,” said Touma, “But at the same time it helped us because it was good to have something to work on. We kept our sanity because of it.”

“At the end of the day,” continued Doueiri, “the writing process is a lot less analytical and intellectual than what people think it is. The work actually is not about the philosophical concept. It’s about how to take the character from point A to B, how to structure that subplot, what the twists and turns are. You sit down at your computer and concentrate on what’s on the page, you don’t think about the bigger issue, that is subconscious, but otherwise it’s the nuts and bolts.”

Doueiri said he relies heavily on his script once it comes to shooting a film, and is not comfortable improvising. “I spend most of my time on the script. It’s so fundamental. I give more value to the writing than the directing.”

Even during the filming when Doueiri was in Israel and Touma in Beirut and Paris, they continued their collaboration and modifications via Skype. One important change that took place during the shooting was the introduction of a radical Palestinian priest who did not figure in the book. “I was scouting in Palestine, and I stumbled on a tiny church in the middle of two mosques in Nablus. We rang the bell. I was curious. The priest opened and showed us the church. As I stepped out of the church, I thought about what if we had Amin [Jaafari] meet a priest, instead of an imam,” said Doueiri.

Touma was initially hesitant but she agreed in the end because “it was to show that the Palestinian struggle is not a religious one.”

Khadra paid them a great compliment, said Doueiri, when he told them that if he were to rewrite the book he would have done it that way.

Khadra was less pleased, however, with the ending of the film: in the book (SPOILER ALERT) the main character dies, whereas Doueiri and Touma keep him alive.

“The book had redemption in it,” said Touma. “I think it’s much more difficult to live with everything that happened, then to die. It would have been too easy to have him killed by Israelis. He had to live with the burden of guilt, that maybe he could have saved his wife.”

In a telephone interview Yasmina Khadra, (a pen name for Mohammed Moulessehoul) said he had found the film excellent, even if he didn’t entirely recognize his book in it. He added that his work had been adapted to the theatre and it had been very different. Still, he said, he respected it.

In the end, Doueiri and Touma said that because screenplays are such an essential element to a film for them, they are extremely happy about the Frankfurt prize.

“I don’t want to underestimate the rest,” said Doueiri, “but it’s almost more satisfactory than it…”

Touma, who studied French literature said, “I’m very proud to have this prize.”