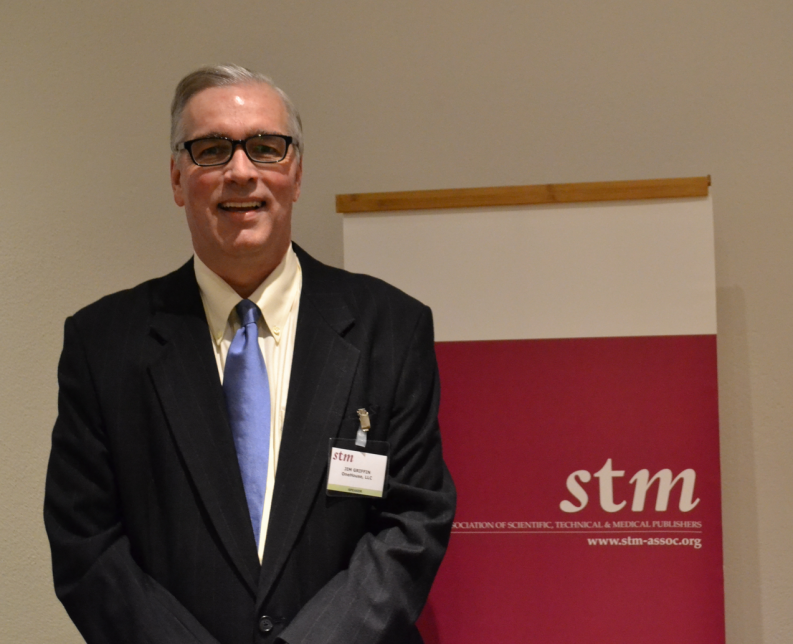 Imploring publishers to use “Tarzan” economics to swing to the new vine, Jim Griffin of OneHouse LLC delivered the keynote speech at the International Association of Scientific, Technical & Medical Publishers annual conference at the Westin Grand Hotel Frankfurt on Tuesday.

“Digitization’s effects come first to the edge, not to the center. The fringe will redefine the center. In fact, we see this is precisely what is happening. New technologies bring you something new completely. The enabling is found in new art and bringing old art back to life. We are hearing more new artists, unusual artists, and old artists,” Griffin, a consultant to the music industry, stated.

Change will come faster than you think, he warned, citing Moore’s law. “It is not simply incremental. Technology will double every 18 months, and the cost will be cut 50 percent. This is what is happening to scientific publishing. And competition will not be from pirates, but from other ways to spend consumers’ money.”

Liberally citing Marshall McLuhan’s “The Media is the Message,” Griffin warned that you will never understand the media of your time. “You will only know it through the rearview mirror of your time. You are always once step behind. You don’t know about the new media until you find the next.”

He stressed that the progress in media technology is almost always about democratization, but is also connected to piracy. Gutenberg was the most important media technologist to exist prior to today, according to Griffin. “Gutenberg was a pirate. He noticed that the Pope was selling indulgencies through scribes. He said, ‘why not impress it as books and then sell the books.’”

Griffin predicted that the future for publishing is far more actuarial. “It is far more about sharing the revenue and a fair way of dividing it up. While we love copyright, it has become ‘copy-risk.’ We lack the technology or will to enforce it. We must turn to actuarial models to enforce it.”

He suggested that publishers establish more robust registries for content. “It’s essential to find the person who gets paid. The translator and the editors deserve a place in the registry as well so that they can be paid. Rights unenumerated is rights unprotected,” Griffin said. “We spend much more time looking for the next piece of content than in enumerating what we have.”

While creating registries is often seen as cost and risk, it can really be a profit center. “It is essential to create a registry to protect property. If we create a regime of registry, it makes it faster and easier to pay.”

Griffin made two final points: “As we swing from vine to vine, we have to think more feminine than masculine. The real value comes from women who understand that starting relationships and maintaining them are much more important than moving from one to one. Amazon is feminine; it even remembers your eye color. We need to cherish relationships.”

He also reminded the audience of STM publishers that there is a transition from Channel We to Channel Me. “Everyone has his own set of facts. Everyone turns to the channel that they listen to: Channel Me. We have lost a community megaphone. When you give people choice, they use it,” he said.