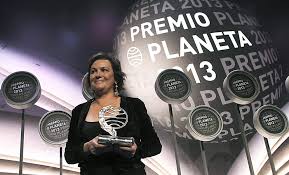 Spanish author Clara Sánchez has won the 2013 Planeta Prize for her novel El cielo ha vuelto, the latest in a string of prizes for the writer and TV presenter born in the central city of Guadalajara in 1955.

Awarded annually since 1952 by the Barcelona-based publisher, the Planeta Prize is the literary world’s second-richest after the Nobel, and the world’s most valuable for a single book, with a purse of €601,000.

Runner-up for the Planeta Prize was former culture minister Ángeles González Sinde for El buen hijo, and who pockets €150,250. This is only the third time in the prize’s history that women writers have taken first and second place.

El cielo ha vuelto is a story that examines the superficiality of modern society, where images takes precedence over substance, and the idea for which came to her while leafing through a magazine, “perhaps in a hairdressing salon,” in which she came across a picture of a model who she was later to meet in person by coincidence.

In the photo, the model’s pose was “languid and neutral, of someone who has nothing to say, as models often pose,” Sánchez said during a press conference after the prize announcement. “And yet that inexpressiveness always suggests a weakness, while the look in the model’s eyes suggests fear, prompting me to ask myself, what is wrong with her?”

“The girl made me think about people who are visible and yet invisible at the same time, and how the image functions in our society, in which we recognize an image and yet we don’t know somebody’s voice.”

The writer explained that the image of the model inspired her to write a story about mistrust and to portray the soullessness of society, referring to the current “vampiresque” nature of our economic and political environment. “I refer to vampires that have gone from sucking blood to sucking neurons,” she said.

She added that the novel explores how far this feeling of mistrust that so dominates society can take us, and is about a runway model who discovers that a prediction made by a fortuneteller is coming true, and that someone wants her killed and is making her life impossible.

A bestselling author in Spain and Italy, where her novel Lo que esconde tu nombre sold 500,000 copies, Sánchez is also an award-winning journalist, having won the Germán Sánchez Ruipérez Prize for the best article on the subject of reading, with her essay Pasión lectora, published in Spanish daily El País in 2006. She also received the Castilla-La Mancha Gold Medal in 2011. Her work is currently in translation in 15 languages and she writes a blog, www.clarasanchez.com, and literary criticism at www.elboomeran.com.