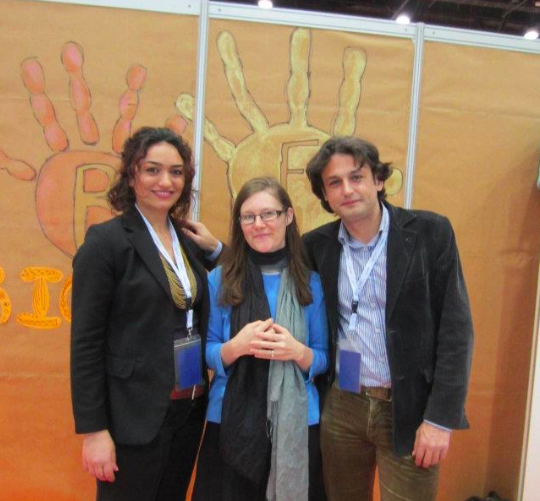 The fierce conflict over Syria’s future, which began with great hopes in the spring of 2011, has battered the country’s publishing industry.

“Now the conflict is entering its third year,” said Osama Esber, who founded the Dar Bidayat publishing house in Damascus in 2004, “and publishing will be one of its victims.” Syrian publisher and poet Osama Esber has moved from Damascus to Chicago.

Many publishers have joined the two million other Syrians who have left the country. But some have remained, Esber said. Life continues, and people find ways to fight the situation. Yet the problems these publishers face are enormous.

“The price of paper in Syria is linked to the dollar, because Syria imports all kinds of papers,” Esber said. “So the rise of the dollar made paper very expensive and this affected the industry.”

Other supplies have also increased in price. Even for the publisher who can afford to keep printing, the danger is ever-present. Most print shops are located in neighborhoods that have witnessed heavy conflict, such as al-Qaddam and al’Asali. Sometimes, Esber said, “you print the book but you cannot move it to the store, and this happened to me.”

In August of 2012, Esber decided the dangers were too great. He left behind his publishing business, and his warehouse full of beloved books, and moved with his family to Chicago.

Samer al-Kadri and Gulnar Hajo, who run Bright Fingers Publishing House, also made the decision to leave Damascus, relocating first to Jordan and then to Istanbul. “The publishing house lost a lot of money and we lost many books,” al-Kadri said. “They were destroyed during the bombings carried out by al-Assad and his forces.”

Bright Fingers used to publish up to 25 new children’s books each year “before the revolution started,” al-Kadri said. “But now, in the past three years, we have produced only 10 books.” Al-Kadri and Hajo work out of their home, print their books in Beirut, and ship from Beirut.

“Even our ability to participate in book fairs had been curtailed,” al-Kadri said. “For example, last year we participated in only three Arabic book fairs, while in the past we would have visited ten.”

Their inability to get to fairs, and the difficulties in distribution, have meant that Bright Fingers can’t produce as many books as in the past. Also, al-Kadri said, the house has lost its main market. “Syria has been our focus in distribution and Syria is a key country for us.” They stopped distributing inside Syria a year and a half ago.

In the last three years, it has become extremely difficult to move books around inside Syria, and the only way to ship books out of Syria is through Lebanon. “For this and other reasons,” al-Kadri said. “books now cost three times what they used to. So a lot of publishing houses have stopped producing new books and only sell their old stock.”

Also, for the publishers who remain, Esber said, the book-buying public has become very narrow. Damascus, Aleppo, and Homs were the major markets for books in Syria — in addition to the coastal region—but people no longer have the time, the attention, or the means to buy books. “They stick to satellite television stations and the Internet when electricity is available.”

“If there are still bookstores,” al-Kadri said, “they are confined to the heart of Damascus or in coastal cities like Tartous and Latakia. Other areas have been totally destroyed with entire populations displaced.”

Esber said that he had heard that the biggest bookshop in Syria, Damascus’s al-Nuri, has been put up for sale.

The economic difficulties, on top of the danger, has made it very difficult for publishers to operate. “The whole of publishing is not more than 10 percent of what it was in the past,” al-Kadri said.

Even so, censorship mechanisms remain in place. The worst part of this, Esber said, “is the role of the Writers Union” in censoring new works. “Syndicates or unions are supposed to protect or defend the writers rights—not censor them.”

In a September interview with Raseef 22, acclaimed Syrian novelist Khaled Khalifa chose to remain optimistic about the future. Khalifa, who has decided to remain in Damascus, said that the banning of his award-winning novel In Praise of Hatred in Syria “has never bothered me. I believe that books have wings of their own which allow them to fly.”

“We are waiting for the moment Bashar al-Assad’s regime falls so we can get back to Syria at that same moment,” al-Kadri said. “We hope that we can help, with the rest of our people, in building what was destroyed by the hands of this dictator.”

“We are sure that this day is coming even though the world has abandoned Syria, and abandoned the idea of providing assistance to Syria and the Syrian people.”