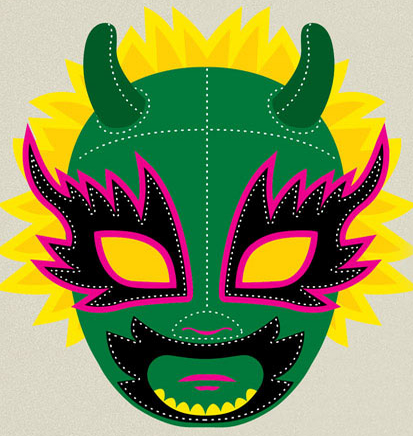 Several years ago, I went to Mexico City to celebrate a major birthday. On my last evening there, my friends and I attended the spectacular masked wrestling event known as Lucha Libre. It was truly a wonderful way to turn 50. And now I know what I want to do for my next major birthday — I want to go to Peru to spend an evening at Lucha Libro.

Writing for The Christian Science Monitor, Annie Murphy sets the scene: “On a recent weeknight, a tall masked man going by the pseudonym ‘Joto’ sat in a cramped backstage room, along with seven other people in their 20s. Some were nervous, others appeared composed. Every one of them wore a Mexican wrestling mask. But instead of wrestling, they were there to write.

‘The mask gives you a sense of security. When you know nobody’s going to recognize you, it makes writing easier,” says Joto.”

Yes. In Lucha Libro, instead of masked midget wrestlers and body slams, want-to-be writers compete against each other in a no-holds barred short story writing competition, all with the hope of winning the grand prize of a publishing contract.

Murphy says that in Peru, paperbacks often cost between twenty and thirty dollars, pricing them far beyond the reach of many Peruvians. Because of this, readership is low and “publishing contracts are even harder to come by the in the United States.” But even so, the land of Maria Vargas Llosa and Cesar Vallejo has more than its share of writers hoping for their big break.

In fact, in a story on Lucha Libro for The Believer in May, Christopher Heaney reported that the event is so important to emerging writers that “some participants travel over an hour from poorer neighborhoods to compete, and there are writers in the provinces, daylong bus rides away, who want in.”

“Lima is still dominated by last names, and social circles,” Christopher Vasquez, the writer who runs Lucha Libro along with his wife, event producer Angie Silva, told Murphy. “This [event] is democratic, because here you come together in front of a public made up of readers, and no one knows who’s behind the mask.”

The idea is genius. Each competing writer gets three words that they must use in their story, a laptop connected to a large screen, and just five minutes to get the story done. “Their writing – including errors, deletions, and deadends – is projected in real time before a packed room.” Judges choose a winner at the end of each round. Whoever wins the final round has six months to finish their book, which will be released at the Lima Book Fair, where the writer will then take off their mask and reveal his or her real identity for the first time.

As Murphy described the scene, “On the night that Joto participated, it was standing room only. A man in a striped referee’s shirt announced contestants. A DJ played music, and during breaks a young woman in shorts and high heels walked across the stage with a card announcing the next round. When it was Joto’s turn, he typed out a grisly story about infanticide. Other stories included single motherhood, flamenco dancers, and a man who kills his mother-in-law.”

And writing for PRI, Murphy quotes Dante Trujillo, who runs the Solar editorial house, which will publish the winning writer. Trujillo told Murphy that despite improvements in Peru’s economy, it is still feeling the impact of some hard decades. There was the military government in the 70s, the civil war in the 80s, and then, the collapse of the economy.

“So the prospects for young authors just beginning their careers, the best advice you can give them is to get out of Peru,” Trujillo says.

But for those who can’t leave, Vasquez points out that the chance to win a publishing contract is important. But, he says, there’s more to Lucha Libro than that.

“It’s also about changing the idea that literature is boring. This turns it into an event. Because it’s not just about the opportunity for a young person to become a writer,” he says. “It’s also about having a place for young people to hang out – and to read.”