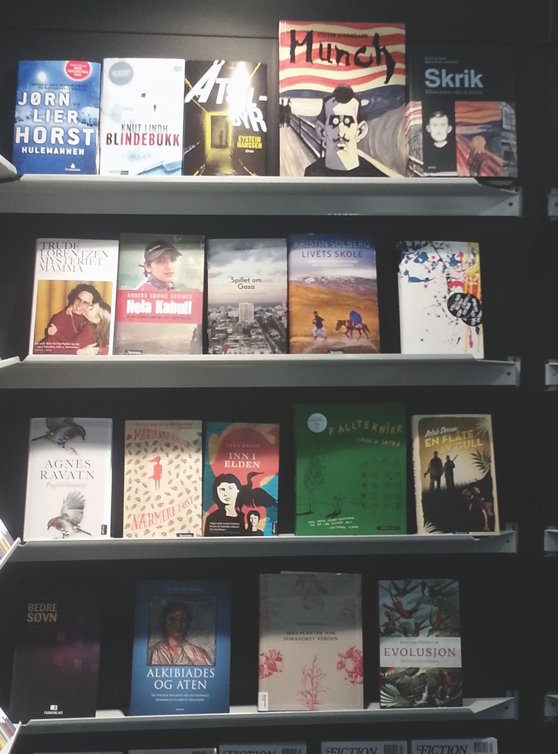 A selection of title NORLA at the Frankfurt Book Fair 2013

Fiction with a dash of autobiography continues to be a strong trend in Scandinavia; Otava’s Rights Director Emma Alftan describes The Thing That Makes One’s Heart Beat Faster, published this July in Finland, as “Virginia Woolf meets Eat, Pray, Love.”

On the crime front, Otava’s Maija Kuusi has her bets on Reijo Mäki’s Indian series and Kati Hiekkapelto’s The Hummingbird. In Indian, a shocking homicide in Finland and a strange crime at the Crow Nation Reservation take place—but what is the connection? The Hummingbird is a debut novel that continues a growing conversation about immigration in Finnish media and literature, with a young, flawed female immigrant police officer taking center stage.

Agent Gustaf Bonde at Bonnier Group Agency worries, however, about debut crime authors, noting that they are having a harder time than they once did. He sees an opening in the market for humorous, feel-good books, like Jonas Jonasson’s The Hundred-Year-Old Man Who Climbed Out of the Window and Disappeared. Bonde says buzz is also building about Lars Berge’s Office Ninja, a satire.

Agnes Cavallin from Partners in Stories is reporting strong buzz around Lena Andersson’s Arbitrary Conduct, a perfectly crafted, deeply sexy literary novel about a woman’s desire and her relationship with an artist.

Linda Altrov Berg at Norstedts Agency is passionate about The Expedition: My Love Story by Bea Uusma, a heartrending nonfiction work about a spectacularly failed 1897 polar expedition. Author and physician Uusma searches for the cause of the explorers’ deaths, which has puzzled scientists and historians for more than a century.

NORLA’s director Margit Walsø noted that Norwegian narrative nonfiction, like Kristin Solberg’s The School of Life, is becoming increasingly global. The School of Life tells the story of a Norwegian doctor teaching women’s rights and peace to midwifery students in Afghanistan. WSOY’s Marketing Manager and Head of Foreign Rights Reetta Miettinen described another title generating international interest: Sami Sillanpaa’s A Chinese Love Story, narrative nonfiction about the life of Chinese human rights activist Hu Jia. The Finnish media is currently in a flurry over the visit of Zeng Jinyan, one of the book’s subjects, to Finland.